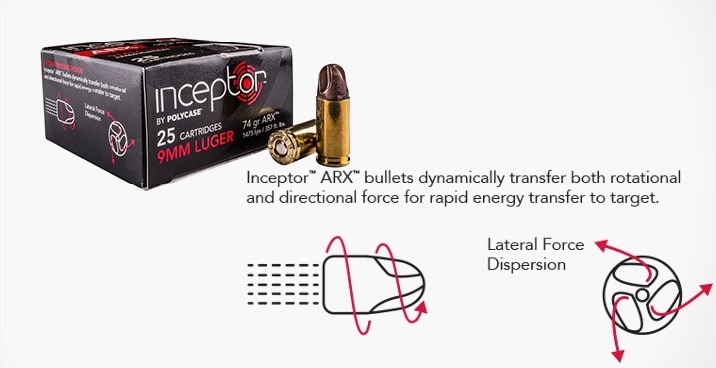 The Inceptor ARX is unlike anything out there, a non-expanding self-defense round. (Photo: Polycase)

The self-defense ammunition market has grown quite a bit the in past few years as more people across the country adopt everyday carry practices. Still, most self-defense ammo employs the same convention: create a large tissue cavity through controlled expansion.

PolyCase’s Inceptor ammo breaks the mold — no pun intended — when it comes to self-defense projectile design. Expanding or hollow-point bullets represent the majority of self-defense designs, with some special-purpose exceptions like fracturing, fragmenting and deforming projectiles.

The ARX bullet still uses the same principles but instead of having a large, flat surface to create a cavity, it has small, aggressively-contoured surface. The bullet has three scoop-shaped vanes that work like a tiny propeller molded into each polymer-copper projectile.

In order for this to work reliably the projectile has to be moving fast, the faster the better. It requires a lot of resistance to create the sheer forces to create expansion and these bullets cook. All of the calibers in production are loaded for speed.

Because the bullets don’t expand they offer relatively high penetration compared to traditional lightweight hollow-points. Although the projectiles weigh less than lead-cored bullets — from 56 grains in .380 to 114 grains in .45, which is light even by all-copper standards — PolyCase has been uploading videos of their ARX ammo’s performance in ballistics gel, and the penetration is within FBI standards, something a lot of low-weight, high-velocity ammo can’t claim. 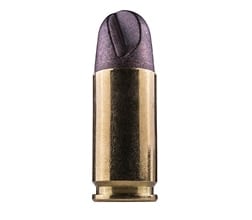 More testing is due. (Photo: Polycase)

It’s unusual ammo to be sure. There’s nothing else quite like it and right now, it should be considered experimental. Until more testing is performed by independent shooters it’s effectiveness as a self-defense or hunting round is unknown. But its principles are sound, and the uncommon bullet construction promises some other potentially life-saving benefits.

ARX bullets are made from a copper polymer composite and molded into their bladed shape. When looked at in profile, the ARX bullet shape still has a full round nose, unlike standard hollow-point bullets. This can mean better feeding, especially with guns that are picky about bullet shape. More reliable feeding means fewer stoppages, which can avoid disaster.

And lastly, the ARX composite is designed to hold together in tissue, but destabilize through barriers. Barrier-blindness is a concern when shooting guns indoors where there may be other people, like at home, with family in the rooms next door.

These bullets are designed to break apart after striking harder materials. While this is another aspect that needs testing, it could be a real selling point if it works consistently. And naturally, this ammo has a significant test market — not being loaded with hollow-point bullets, this ammo is no different than all-copper ball ammo as far as state and local restrictions go.

PolyCase is partnering with Cabela’s to launch their ARX family of cartridges. They are loaded to SAAMI specs and despite their velocities, are comparable to many standard-pressure self-defense loads on the market.

“Cabela’s is the premium retail destination for American sportsmen and outdoorsmen,” said Paul Lemke, CEO of PolyCase. “PolyCase’s partnership with Cabela’s represents our first foray into the large footprint retail market and we could not be more excited. The Inceptor ARX is the newest premium self-defense ammunition and fits perfectly into Cabela’s shooting and hunting market segment.”

Right now it’s in-line with other premium cartridges and loaded in polished brass cases. It’s priced at $24 per box of 25 in all calibers currently, and we expect prices to come down as Polycase covers their start-up costs. Polycase will soon have .38 Special and .357 SIG loads available and Cabela’s is taking pre-orders on them.