SI-Defense receivers have the same controls on both sides for true ambidextrous function. (Photo: SI-D)

SI-Defense is a new company with a handful of very promising products including an ambidextrous machined billet lower receivers. Unlike other ambidextrous receivers, these have mirrored controls, with buttons in the same places on both sides, for a single manual of arms.

Until now they have only been offered as .308 DPMS-style receiver sets, which are absolutely welcome but not as popular as the smaller AR standard. These .223 Remington/5.56 NATO receiver sets are are multi-caliber marked for whatever build you can envision.

The only part that isn’t absolutely ambidextrous is the ejection port. The upper receiver uses standard bolt carrier groups and ejects to the right side of the rifle. The upper has a shell deflector on the right side so brass realistically won’t be a problem. Because the upper uses standard bolt carriers the forward assist is also only located on the right.

Everything else really is ambidextrous, including the takedown pins. In addition to the controls, the detent pin holes are mirrored allowing users to install them on the left or right side as they wish. The magazine release button, bolt catch and release buttons and selector levers are all mirrored on the left and right. 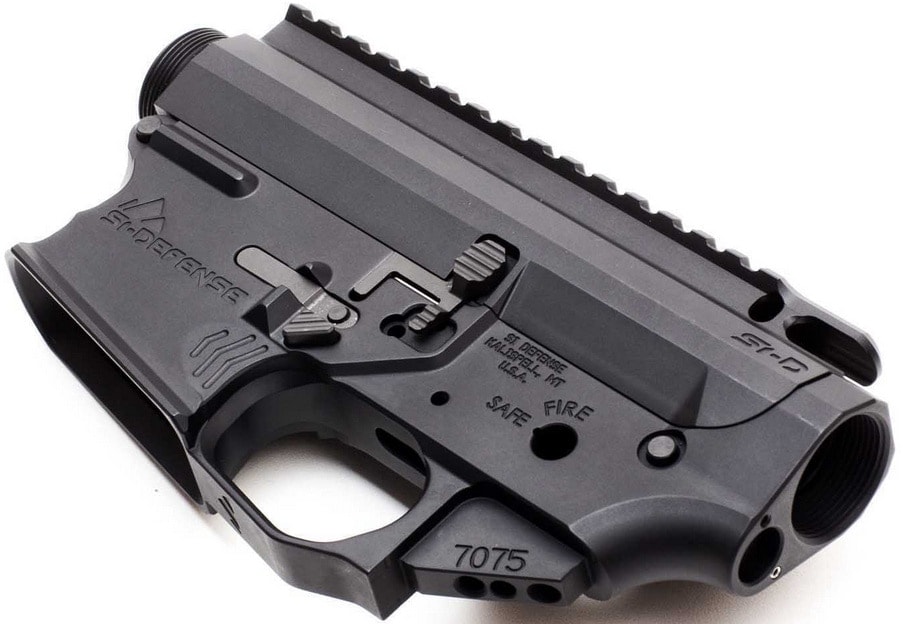 Here you can see that even the detent pin holes are on both sides to let users reverse the takedown pins. (Photo SI-D)

The selector is engraved with “Safe” and “Fire” to work with standard and short-throw selectors which are becoming increasingly standard on high-end and custom rifle builds.

You don’t have to be a lefty to appreciate the ambidextrous controls on this rifle. It’s very common today for practical shooters and competition shooters alike train to shoot left- and right-handed regardless of which is their strong side. With the controls in the same spots on both sides shooters have less to memorize to get things right, which means faster response times and fewer mistakes.

There are a few other nice touches with these hard-anodized billet receivers including a finger-grooved magwell for use as a forward grip and finger indexing on both sides to provide tactile feedback when keeping your trigger finger off the bang switch.

The detent pin holes and forward assist are threaded to keep springs from flying out and to make installation easier. SI-Defense also uses a quick-detach ejection port cover to make installation and part swaps that much easier. And lastly, the bore is reamed for more consistent barrel alignment and fit, which provides a better foundation for accuracy.

SI-Defense receivers aren’t the least expensive sets on the market, that being the one hard pill to swallow. Still, at $525 for a matched receiver set they do a lot more than comparably-priced machined billet sets that don’t offer any functional improvements at all.

These mirrored ambidextrous receiver sets are going to get popular, fast, especially in the high-end and boutique rifle scene. If you’re putting together a hardcore practical-tactical AR-15-type rifle you might want to start with a set of these.