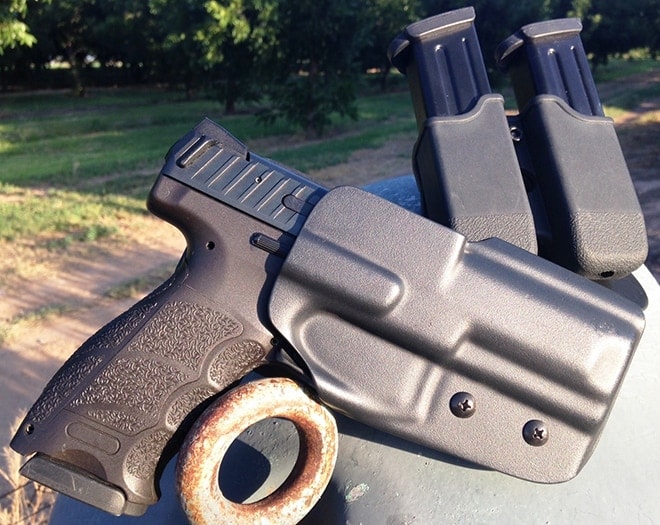 Some time back, I became the proud new owner of an HK VP9, which became the topic of a review on Guns.com. Of course it wasn’t long before the search was on for the perfect accessories—which rapidly morphed into the search for “good-enough” accessories.

If you’re a VP9 owner looking for gear, hopefully the experience described here will simplify your search.

The VP9’s popularity has driven the development of holsters by companies large and small, some moderately priced, some quite expensive.  Compared to the first few months following its release, accessories—holsters and magazine pouches for purposes of this review—are more widely available, if not abundant. 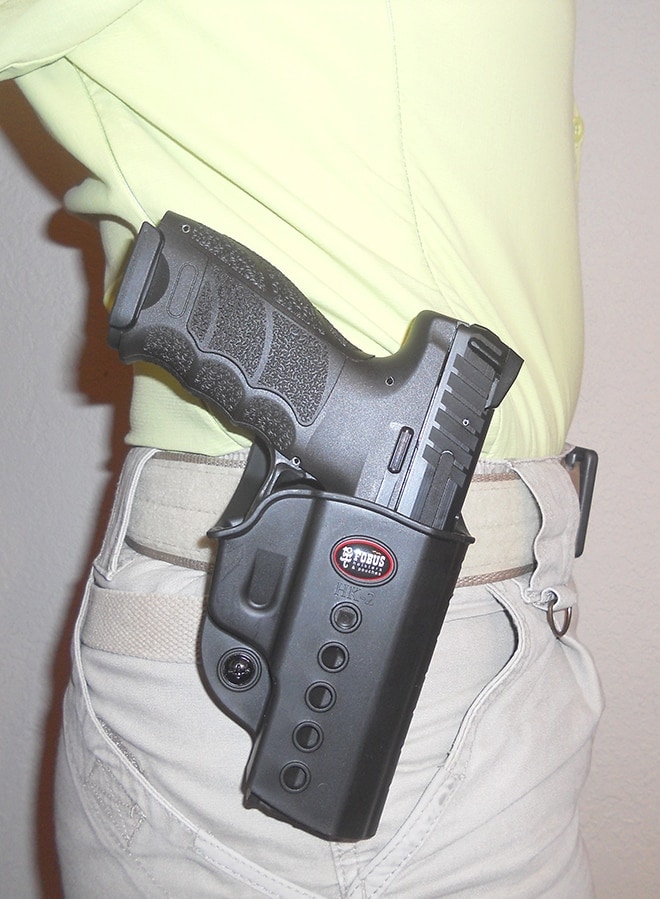 The few accessories addressed here don’t include concealment items or soft-sided holsters. The VP9 is a great firearm for the range, but too big for yours truly to conceal on-person, and if I opt to carry a full-size pistol off-body, I’ll pick something that carries more than 15-plus-one.

For practical reasons, I considered only belt- or paddle-mounted Kydex holsters, acceptable in any shooting class as ­­­­­­­­­­­­­­­­­­­­­­­­­­­­­­­­­­­­­­­­­­­­­­­­­well as in competition. Such a holster is also free of dangling straps and the risk of collapsing shut when I’m re-holstering, both of which can cause conditions that may result in a negligent discharge. Along with the Kydex-only shopping guideline came a budget to keep the total outlay less than $120.

My first pick, a Fobus Elite Concealment model, was priced reasonably, in the high $30s plus shipping. The gun fit well in this paddle holster. However, I sent it back, finding the non-adjustable, slight rearward cant annoying.  Drawing from the high-riding rig was painful for my once-injured shoulder and obviously not the choice for my short-waisted self (but probably a fine pick for a larger-framed person interested in concealing the gun under an over-shirt or jacket).  A perusal of online reviews of rearward-cant holsters seems to reveal a preference for that design by people with a hefty mid-section, for whom the tilted setup keeps the gun comfortably out of the way.  Not a bad holster, just not what I was looking for. 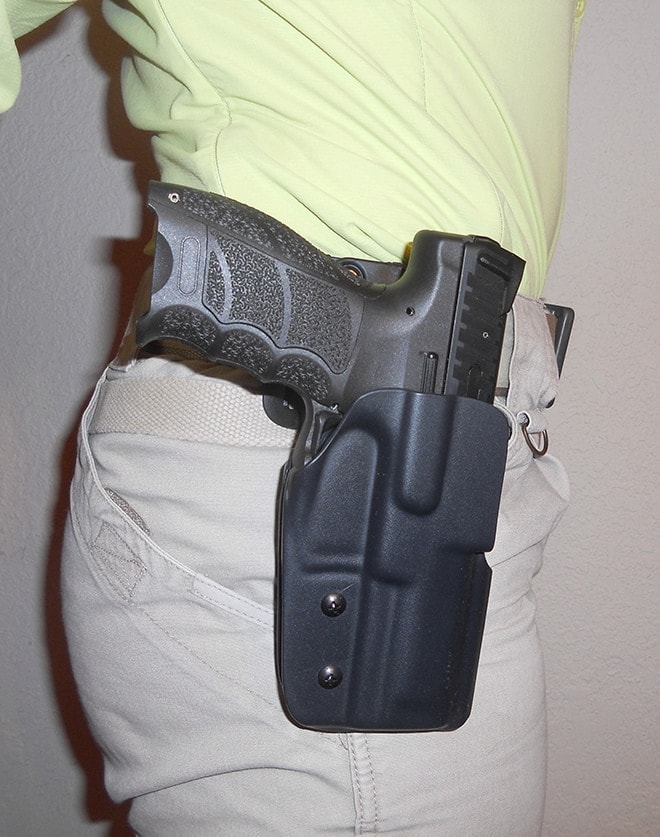 So much for the least expensive Kydex choice. The next brand I looked at was Comp-Tac.  Their well-rated International model is now available for $74.999 plus shipping. Their classic standard belt holster, with a trimmer profile, isn’t available in a VP9 fit. I moved on to look for a less pricey choice, if it existed.

Enter Blade-Tech.  The company offers a belt-mounted OWB holster for this gun, just like the one my 1911 rides in, which works well. The options for this holster are numerous, and in some cases labeled with a dizzying array of acronyms.

Blade-Tech’s customer service rep solved the acronym confusion. For $64.99 + shipping, I was soon mailed a belt-mounted, perfectly vertical holster with a slight drop that makes the draw quicker and easier for me.  An added bonus: I was told production time could take as long as five days before shipment. Blade-Tech over-delivered, and I had the holster in three short days. 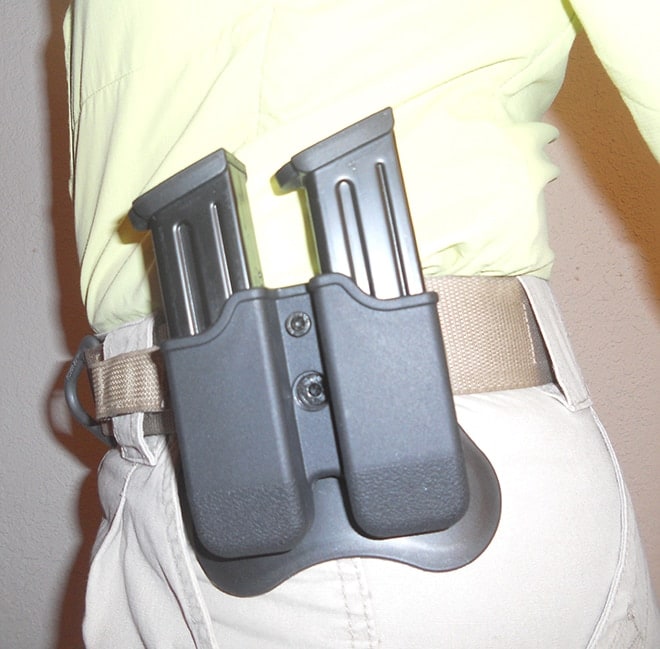 Finding the perfect double magazine pouch was a challenge.  CompTac didn’t have one—and even if they did, I find the gap between the pouches on their twin pouch a space-waster. Blade Tech makes a great adjustable double mag pouch for $54.99, and the temptation to burn the entire budget was strong.  But, an apparent deal that showed up on an Amazon.com search that seemed too good to be true. Combat Armory had no VP9 holster, but does carry a paddle-attachment, double magazine pouch with adjustable retention for $12.99 (no, that’s not a typo it really is a baker’s dozen bucks) plus shipping.  The price is right, and the pouch turned out to be as comfortable and stable as a paddle device can be.

Magazines were another story… so few were available when this gun had been on the market for less than a year.  Many stores, even those specializing in HK products, had mags listed, but all were out of stock.  Thankfully, that’s changed in recent months.  The only real disappointment with this gun, the 15-round magazine as compared to 17-18 in similar-size models, is compounded by the price of the magazines.  Regardless of outlet, the price hovers around $50 each. My local retailer charged $53.00 including tax.  HKparts.net has them in stock for $54.95 including shipping. Perhaps this is to be expected; after all HK products aren’t cheap.  But for being 30 percent higher than average, the magazines aren’t anything special.

Those dedicated to owning and mastering the VP9 won’t hesitate to invest in functional accessories, whatever the cost.  As covered in the previous review, the gun’s paddle mag release and 24/7 ambi controls, including the slide lock, can inspire both deep affection for the gun while demanding dedicated practice to master its handling. Outfitting it for practice and carry is slightly more search-intensive and costly than more common mass-market handguns, but accessories seem to be increasingly available. Overall, Blade-Tech offers the most convenient and high-quality choices, but Combat Armory’s mag pouch gives Blade-Tech a run for its money on value.