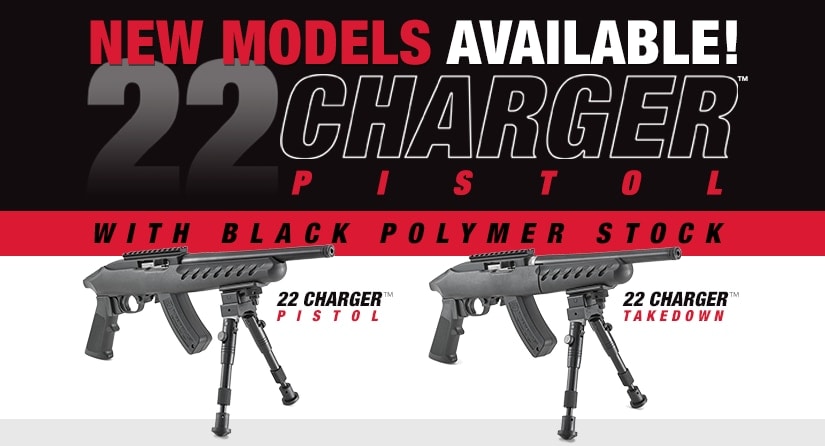 Sturm, Ruger & Company has announced new models of the redesigned Charger 10/22 now with polymer stocks. Ruger’s got two models, a standard Charger as well as an even more compact Takedown version, both chambered for .22 Long Rifle.

The Charger is the pistol version of Ruger’s timeless 10/22 rimfire rifle design, re-introduced late last year with a new style of stock and AR-15-pattern pistol grip. These pistols were brought back to the market with laminate wood stocks, though, which just aren’t for everyone.

Polymer furniture is pretty standard today for its ability to withstand abuse and ask for more. It’s also inherently waterproof making the new Chargers more versatile than ever. These Chargers can be tossed in a backpack or tacklebox and enjoyed almost anywhere.

Both models are sold with either a 10- or 15-round magazine. (Photo: Ruger)

Specs are pretty similar, with a weight of just over 3 pounds, 3.2 pounds for the takedown version. They have 10-inch barrels which will get the most out of .22 LR ammo. The barrels are threaded to accept 1/2×28 muzzle devices and they have flattop rails for red dots and other pistol optics. The forends are equipped with a swing swivel stud for mounting bipods.

Apart from the new stocks and railed receivers these pistols are 100 percent 10/22, every bit just a proven and reliable as the popular .22 rifles and compatible with a large chunk of the 10/22 aftermarket, including triggers, magazines and other accessories.

The poly-stocked MSRPs are price the same as the laminate-stocked Chargers, a relatively affordable $309 for the basic model and $409 for the takedown version with the detachable barrel. Real-world prices are expected to start in the $250 to $350 range depending on the model. Both are offered with your choice of 10-round or 15-round magazines.