Pancor Jackhammer: The automatic shotgun that never was

One of the more exotic shotguns that have ever crossed a drawing board was the one that John Andersen came up with in the early 1980s. He officially called it the MK3, but it will go down in history in this planet and virtual ones alike as the Jackhammer.

Firearms inventor John Andersen (sometimes-spelled Anderson) thought out the concept of a gas-operated, automatic-fire shotgun for military and police use. His gun would allow full-auto fire of new and advanced 12-gauge shells, be rapidly reloaded, and still be small and compact enough for the average foot soldier to carry into combat.

To accomplish this, he envisioned a reciprocating barrel with a fixed gas piston enclosed in a cylinder. When the gun fired, the barrel pushed forward and the action, set in a bullpup style behind the trigger

group, ejected the spent shell hull and loaded another in what we would consider a very complicated process. This unique action gave the gun (which turned out looking rather industrial anyway) a very distinctive ‘jackhammer’ style of operation when firing that led to its nickname. If the trigger was kept depressed after the first shot, the weapon would continue cycling, thus producing automatic fire until the trigger was let up or the weapon ran out of ammunition. There was no option for single shot fire; the gun was full-auto only commenting directly on its philosophy of use.

The 20.75-inch smoothbore barrel gave a 31.10-inch overall length and a weight (unloaded) of ten pounds. Polymers were used as much as possible in the firearm to keep weight low, in itself was a very visionary concept for 1982. At the time, the Glock 17 aka “the plastic fantastic” was only then being introduced into the US.

The weapon’s ammunition supply also screamed 80s. It came in the form of a circular ten-round “Ammo Cassette” magazine that would be inserted between the rear pistol grip and the buttstock itself. The cassette was prefilled with proprietary, advanced shotgun shells and sealed in plastic, the idea being that the end-user would swap cassettes rather than reload them. The theoretical rate of fire cyclic was 240-round per minute but this would certainly be much less in the field, considering the cassette would have to be replaced after every 10-rounds.

Perhaps most interestingly though, some of these loaded cassettes could also be laid as booby traps. Referred to by the company as a ‘Bear Trap’, the cassettes could be set like mines and would trigger all ten rounds simultaneously if disturbed—possibly the first time a multi-use explosive trap was included as a factory option in a firearm.

The Pancor Corporation of Albuquerque, New Mexico became the company of record for the gun, which was marked as the MK3, and produced two working prototypes from Andersen’s patent in 1984. Unfortunately, they did not cycle well in initial tests.

firearm—and simply put, it wasn’t. The resulting issues from these led to jams. Once some of the bugs were worked out however, these guns were evaluated for use by the Regan-era US military. During this 50,000-round test by the Defense Department, the more traditional (not to mention cheaper) Mossberg 500 and Remington 870 pump action shotguns using standard 12-gauge ammunition were procured instead of the Jackhammer. This killed any prospect of the gun being adopted by the US military and, in turn, made foreign military sales an unlikely option.

Adding insult to injury, the full auto only mode of fire and the funkiness of the gun’s design led BATFE to classify the firearm as a machinegun. Since those are rather forbidden by the 1986 Hughes Amendment for the general public, the Jackhammer was further hobbled from civilian sales. This was the last nail in the coffin for the design.

Pancor folded and the only working prototypes were retained by Mr. Andersen who subsequently sold them (as they are pre-1986 and therefore transferrable) to private collectors some time in the 1990s. It should be noted that these impressive looking firearms appeared in several action movies as prop guns throughout the early 2000s. 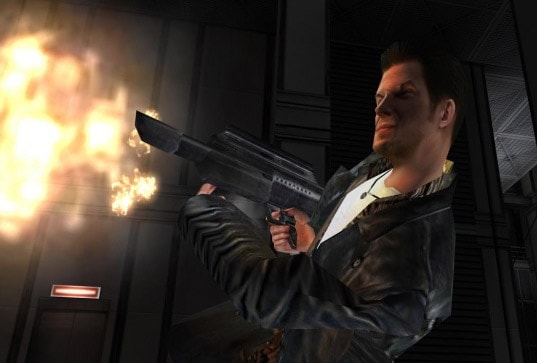 Anderson perfected his design by 2000 and has had the concept up for sale for $350,000 since then, without takers. This meant that the gun, after a nearly 20-year R&D cycle, will most likely never see production (a fate the more modern AA-12 shotgun may share with its fully-automatic predecessor).

Of course, reality never visits the world of video games and, even more than on the silver screen, the Pancor has popped up as a selectable weapon in more than 30 modern First Person Shooter-style games including Far Cry, Fallout, and Rainbow Six. There have literally been a dozen or so video games produced featuring the Jackhammer, for each of the prototypes that were actually produced.

Therefore, odds are the only one you will ever fire will be from your couch at 2AM as you talk smack to an alien/terrorist/cyborg menace on your flatscreen.

Life is so cruel sometimes.

This article originally ran on Guns.com as “The Pancor Jackhammer: The greatest automatic shotgun that never was” on 1/7/2013.