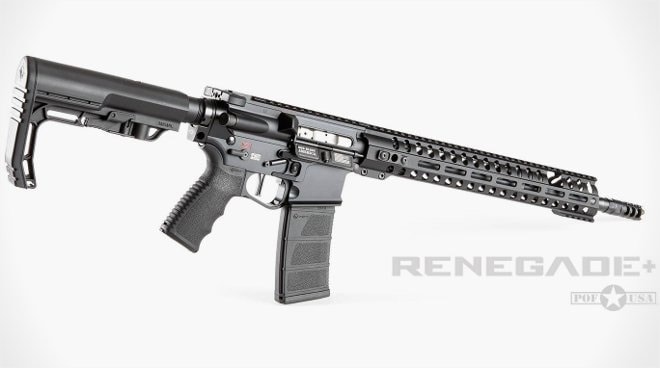 The Patriot Ordnance Factory, or just POF, has created a new series of AR-based rifles built to meet customers’ demands. The changes and improvements make for a much lighter, more maneuverable rifle, the Renegade. It’s a high end rifle that uses POF’s adjustable direct impingement gas system in place of their original short-stroke system.

The first model is a standard carbine-length rifle with a 16.5-inch barrel with a black nitride finish. The handguard measures in at 14.5 inches and runs right out to the muzzle, which is capped with a combination 3-baffle muzzle brake and standoff device. The handguard has a cutout at the gas block to let users easily adjust the gas block.

The rail has Magpul M-Lok slots along the 3-, 6- and 9-o’clock position for accessories and comes with a small rail section for a pistol grip or bipod. The handguard has a full-length Picatinny rail at 12 o’clock position to accommodate sights, lights and lasers and four quick-detach sling sockets front and rear on both sides.

Additionally the rifle has an ambidextrous quick detach sling sockets on the endplate and stock. Internally the Renegade comes standard with a enhanced bolt carrier group with a Robar NP3 finish and roller cam pin, ambidextrous selector and charging handle and an in-house flat-faced match 3.5-pound trigger pack.

With the Renegade POF decided to forgo the fluted barrel, and instead of Magpul accessories the rifle comes with Mission First Tactical components including a Battlelink Minimalist Stock, pistol grip and 30-round magazine where available. The changes all add up and the new rifle is lightest POF option to-date.

One of the main criticisms about POF’s rifles is their weight. The Renegade weighs a full pound less than it’s P415 counterpart at 6.4 pounds dry. It has a suggested retail price of $1,899 which is about a couple hundred dollars less than other POF rifles.