It is no overstatement; John Browning formed much, if not most, of the world’s understanding of small arms and what they are capable of. From the Colt 1911 to the Auto-5 shotgun to the BAR, when we consider almost any genre of firearm design (and philosophy of use) all paths inevitably seem to lead back to one man, John Moses Browning.

And one of his lesser known but no less remarkable achievements was the Remington Model 8—a semi-automatic sporting rifle.

Browning, already an eminent firearms guru, took the same basic long-stroke recoil operating system as his new Auto-5 shotgun and designed a rifle around it.  It had a 22” steel barrel, integral box magazine that could be filled by means of five-round stripper clips (a useful feature at the time) and came in a number of mild-shooting chamberings such as .25-30 Remington Auto and .35 Remington for light recoil. The beefier .35 Rem version would only hold four rounds in the magazine, whereas the other calibers could hold five. Overall, the semi-auto rifle was groundbreakingly simple without the use of impingement gas systems. Basic models weighed in at 8.5 pounds and were 41-inches overall.

Between 1906-1936, some 80,500 Model 8 rifles came from Remington’s lines with sequential serial numbers. The rifle was offered most commonly in .35 Remington, a bottle necked round ballistically the next step up from a modern .30-.30 Winchester. Other less common calibers were the .25-30 Rem, 30 Rem. (the parent case of the 6.8 mm Remington SPC cartridge), and 32 Rem., all short-cased rimless cartridges good for medium game at intermediate ranges. These rifles, besides the caliber variations, were offered in a dizzying variety of grades as well from Standard to Premier.

Military and police Use

Some 100 .35 Remington chambered Model 8s were shipped to France in 1915 during WWI. These guns, on order for the 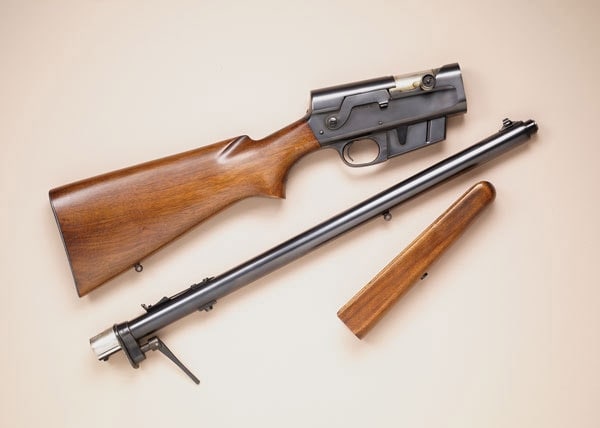 French Air Force, took some of the first pot shots at the Kaiser’s Fokkers and Zeppelins. A few more were sent to Europe for the next World War as gifts to the British government.  These were used by Home Guard units. From time to time, these old guns show up on both sides of the pond bearing British proof marks and interesting stories. Some Model 8’s found themselves one way or another in the hands of White Russian Cossacks during the bitter Civil War in the Ukraine. In 1921, 25 trials guns were ordered by the US Army Infantry School in .25-30 complete with Lyman peep sights.

With the promise of five rounds as fast as you could pull the trigger and the .35 Remington’s capability to take down a grizzly or shoot through 5/16th steel plate, many officers and outlaws acquired Model 8s during their respective careers. Legendary man-hunter Frank Hamer used one, complete with an aftermarket 15-round Peace Officers magazine during the ambush that ended the career of Bonnie and Clyde. Texas Ranger Manuel Trazazas “El Lobo Solo” Gonzaullas spent a rough twenty years along the border chasing bootleggers and outlaws with a similarly converted Model 8 (as a sidebar, Gonzaullas also carried a pair of 1911s cocked, unlocked, and with the trigger guard cut away). 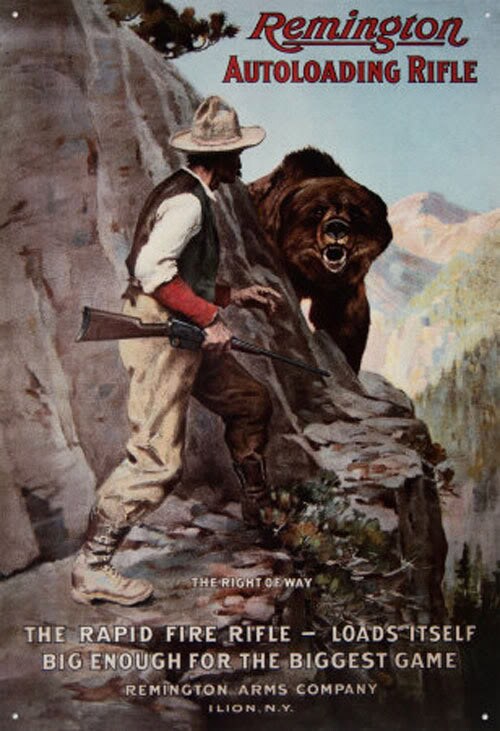 The Model 8 proved to be such a success that a slightly improved descendant was produced for another three decades after the closure of the “Great 8″‘ line. This improved version was the Model 81 Woodsmaster. Some 55,581 of these rifles came from Remington’s plant from 1936-1950.

While the hard-hitting .35 Rem and .32 Rem calibers were retained as the primary offerings for the Model 81, the lighter .25-30 Rem was dropped. As a complement for deer and black bear hunters of the time the thick 300 Savage caliber in 1940 was added as an option. A glut of cheap Post-WWII carbines such as the M1 spelled doom for the more expensive Remington semi-auto. In 1952, Remington replaced the M8/81for good in its catalog with the gas-operated Model 740, but recycled the Woodsmaster moniker for this popular Power-Matic action semi-auto.

It should be remembered, as with most of Browning’s Pre-WWI designs, Fabrique Nationale of Liege Belgium, (better known simply as FN) also manufactured the rifle. Overseas it was billed as the FN Browning Model 1900 carabine automatique and produced from 1910-14 and 1919-29. These FN guns are rare and less than 5,000 were made. It seems that European sportsmen were gun shy about the foreign .35 Remington chambering that was standard on the FN M1900 (not to be confused with the FN pistol of the same name). These FN guns have a superior finish to Remington variants and use European walnut furniture.

Of the six calibers they were offered in, only .300 Savage and .35 Remington are still being made commercially. This puts .300 Savage M81s made between 1940-50, as well as the whole gamut of .35 Rem caliber M8/81s in the shootable category. Both of these rounds still have a good following with whitetail deer hunters across the country. A recent survey of prices online show that shooting grade models currently average $300-$600. Keep in mind, however that these collectible autos have been out of production for more than sixty years and their pool of spare parts is shrinking.

When determining the value of examples with rare grades, obsolete calibers (especially .25-30 Rem), or foreign or law enforcement proof marks and stampings, be sure to consult a professional, as you may have a gem.  Either way, any Model 8 is a pretty neat gun.

This article originally ran on Guns.com as “The Remington Model 8: Browning’s semi-automatic ‘sporting’ rifle” on 9/12/2012 and has been edited for content.