Today there are dozens of companies that specialize in selling everything from surplus Russian Mosin rifles, to Belgian Vigneron submachine-gun parts kits, to well-used World War 2 steel pot helmets. What you may not know is that all these companies all owe their origin to Francis Bannerman and his island of wonders.

Born in Scotland in 1851, Francis Bannerman IV grew up in New York. Son of a salesman who specialized in reselling goods bought at local auctions, the junior Francis started picking up lots of goods himself and selling them in smaller pieces to collectors of curios, relics, and interesting items. Then he discovered government surplus. 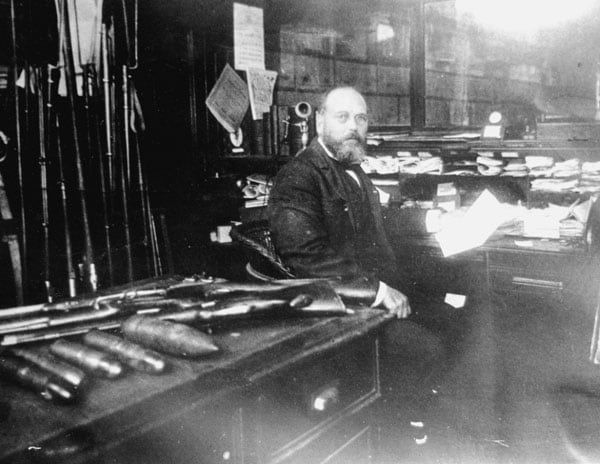 What did they sell?

After the Civil War ended in 1865, a young Mr. Bannerman started bidding on huge lots of captured Confederate guns, often winning as many as 11,000 at a time. When those stockpiles were sold out, he kept in touch with the Army, and every time the Ordnance Corps adopted a new piece of equipment, the wily New Yorker showed up with his checkbook sniffing around stores of recently replaced surplus gear. 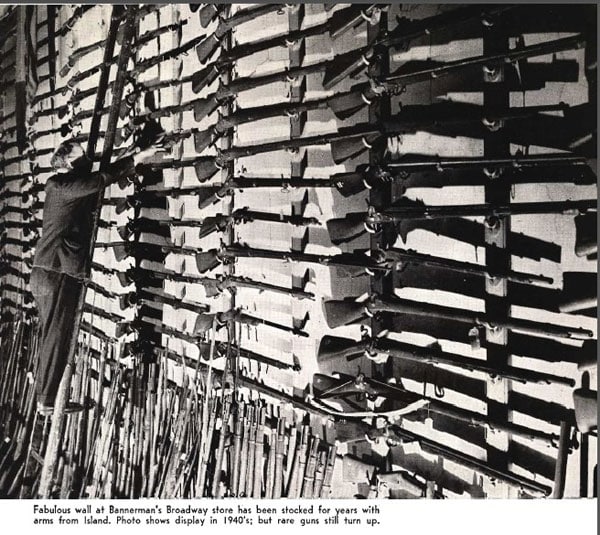 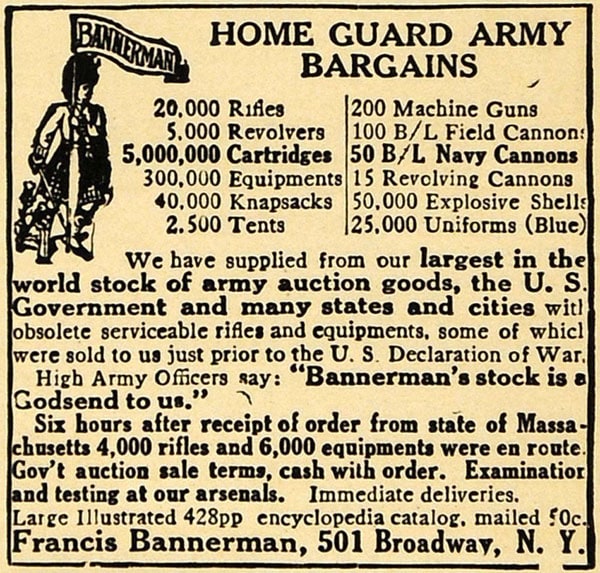 In the 1870s, he bought as many as 200,000 Springfield muskets and sold them for $5 each, keeping the same price on them until they sold out in the 1930s. When the army switched from blackpowder cannons to more modern smokeless powder breech loading guns in the 1890s, he was there again and paid scrap iron prices for guns ranging in size from small Parrott field guns to giant US Navy 16-inch cannons. Ever seen an old Civil War era cannon downtown? Odds are it came from Bannermans and was installed around 1900—he sold thousands of these weapons to villages, veterans groups, and the like for a slight profit. In 1942, they were still selling Civil War-era Spencer carbines for $2, having bought them for just 35-cents the century before. 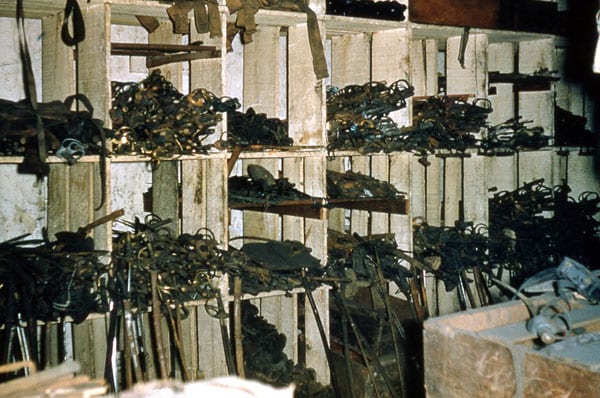 In 1898, he lucked into having the winning bid on just about every one of the thousands of Spanish rifles and millions of rounds of ammunition that the US Army captured in Cuba and the Philippines after the Spanish-American War. This went well with the 250 .45-caliber Colt Gatling guns and 8-million cartridges he bought surplus when the Army went to machine guns in 1909. 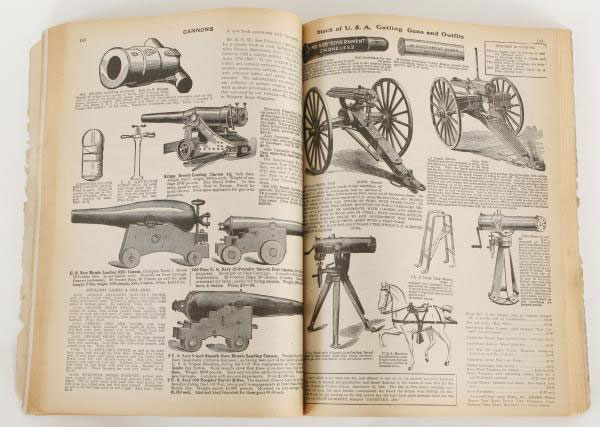 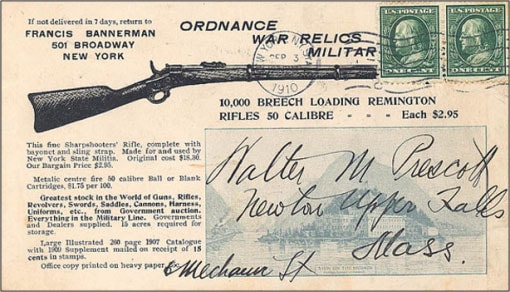 Stacks of belts and harnesses from Bannerman’s on Broadway. (Photo: Bannerman Castle Trust) 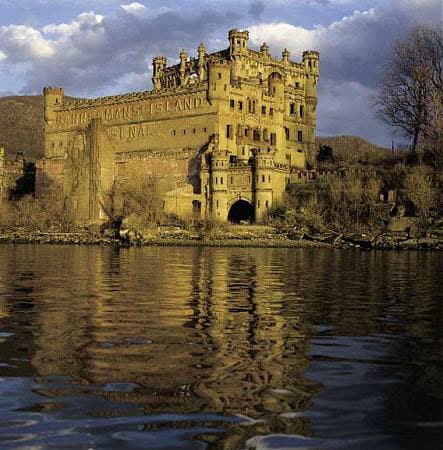 The business grew so much that by 1905 they had taken over nearly a whole block of Broadway from #499-501, amounting to over 40,000 square feet of floor space. When this filled up, Bannerman bought a 7-acre island in the Hudson River 50 miles north of the city. On this island arms depot, he built a huge castle from cement bought at a surplus auction, filled it with enough arms to take over several countries, and built a breakwater made from thousands of Springfield musket barrels banded together.

Whom did they sell to?

No visit to New York in the early 20th century was complete without some time spent browsing Bannermans. Their huge block long store located along Broadway was probably one of the best places to see weapons from all over the world all in one place. Better yet, these swords, cannon, firearms, and uniforms all had a price tag. 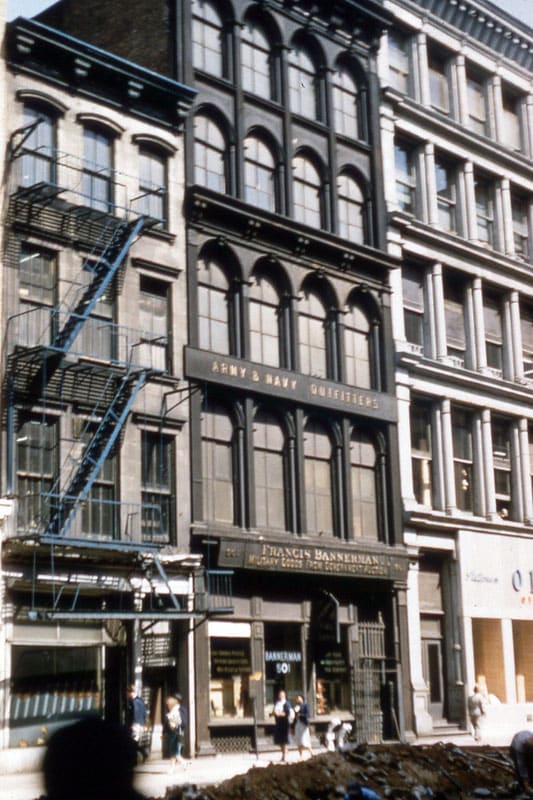 Bannerman’s on Broadway, circa 1950s. 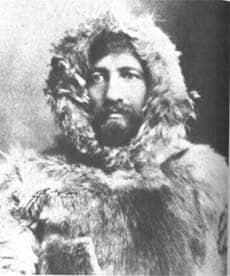 Sportsmen the world over would order entire collections of rifles from the warehouse, as would resellers, those who had an interest in collecting, and those looking for good deals on historical arms. Explorers such as Admiral Perry, Frederick Cook, and Richard Byrd were known to have expeditions equipped in whole or part from Bannerman’s catalog. Soldiers of fortune, ranging from Lee Christmas who became the commander of the Honduran Army in the 1920s to the idealistic young men of the Abraham Lincoln Brigade who fought in the Spanish Civil War wandered the dusty stacks of the surplus dealer’s leviathan store before catching their steamships to destiny.

Long before the National Firearms Act or the Gun Control Act, Bannerman’s put into effect a number of policies to control their products. They were one of the first large gun sellers to refuse munitions sales to minors. By the 1920s, they refused to sell either cane swords or cane guns from their collection to any but museums. This of course did not stop the company from making large-scale weapons deals to foreign governments. 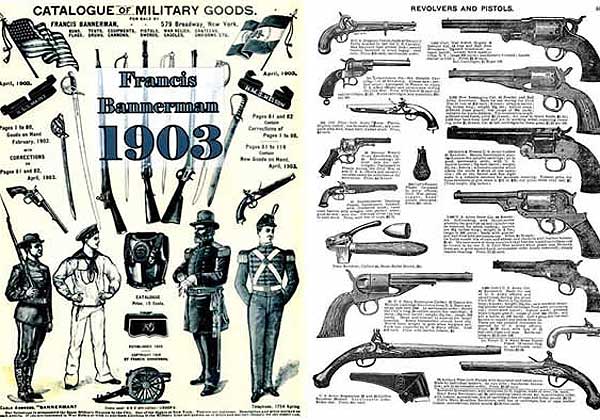 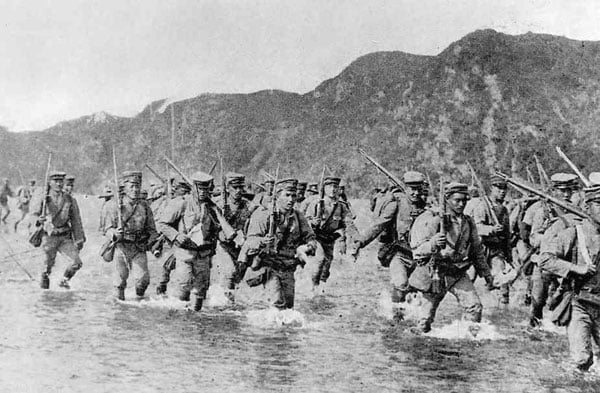 In 1905, when the Japanese were fighting a bloody war with Russia and were running short of everything, Bannerman sold them 10,000 surplus US cavalry saddles, 100,000 rifles of all sorts that they just had lying around, and 20-million rounds of ammunition. The Haitian and Dominican governments, sharing the same island in the Caribbean and often coming to blows with each other, were frequent customers of the New York surplus empire. Several times in the 1920s, large yachts would quietly pull into New York and leave a week later, completely fitted out as warships complete with Hotchkiss deck guns and WWI-surplus Lewis guns, soon to be owned by a South American government or some far-off African state. 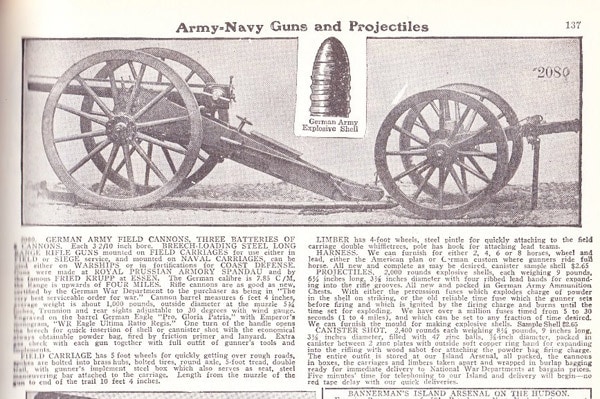 If you wanted a complete eight-gun battery of German 77mm artillery pieces complete with limbers, shells, and tools, the 1927 catalog advised they could ship by the end of the week, price on request. 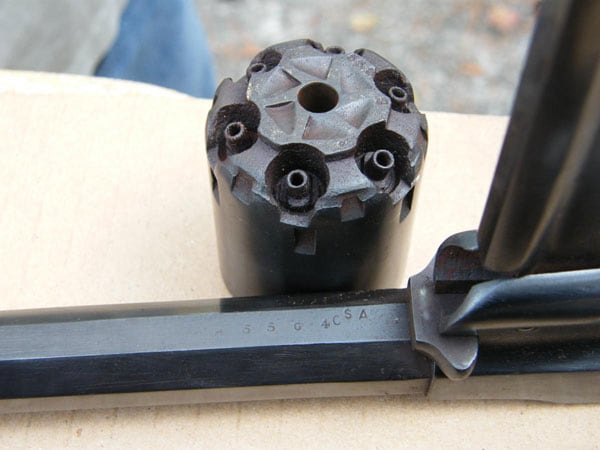 This US Army issue Remington 1858 revolver in the authors collection has very interesting CSA markings in several places and is likely a ‘Bannerman’s Special’. (Photo: Chris Eger)

Always a salesman, Bannerman’s often modified their products to sell better. When it was seen that customers would turn their noses up at beautiful US Army Remington revolvers only to pay twice as much for a Confederate Colt Navy from the same period, increasing quantities of US guns started appearing on the company’s shelves and catalogs with fresh CSA markings. When customers wanted sportier rifles to go hunting with, the hacksaws came out and some of the first bubba-special milsurp guns hit the market. Some guns had parts swapped while others had calibers changed on the fly, with no warranty. With that being said, do not fire a Russian Mosin chambered in 30.06.  None of this makes Bannerman popular with collectors. 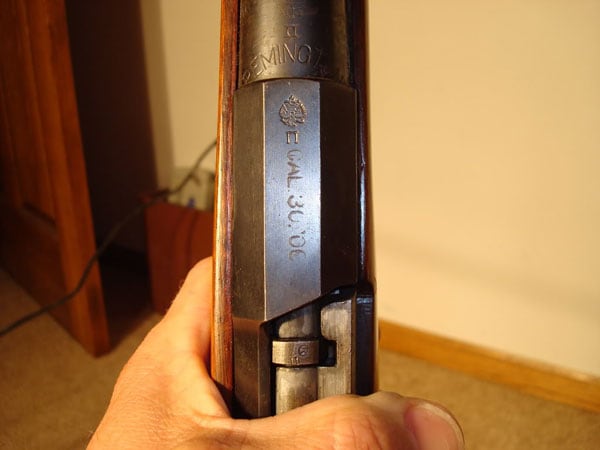 A Remington made Mosin rifle modified by Bannerman’s to fire .30-06. (Photo: Chris Eger)

Yet the salesman was also a patriot and often gave away or sold at token prices huge quantities of guns, cartridges, and equipment when the country found itself in trouble. In both world wars, the company packed up most usable weapons and passed them back to Uncle Sam at every opportunity. This of course, was repaid after each war when he could pick up nearly new surplus to replace his old stocks thanks to this relationship. 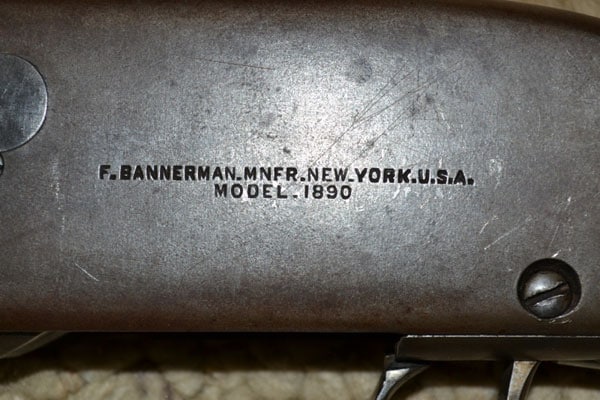 Bannerman markings appear on thousands of guns and add collector’s value to most. (Photo: Chris Eger)

A champion of military preparedness, (the US Army in 1914 was smaller than that of Belgium’s), he sold 5-pound ‘Quaker Guns’ made from old broken muskets at bargain prices to schools, churches, and Boys Brigades across the country. These guns, incapable of shooting, were still good enough to train young men how to drill with rifles in formation.

Decline and fall of the empire 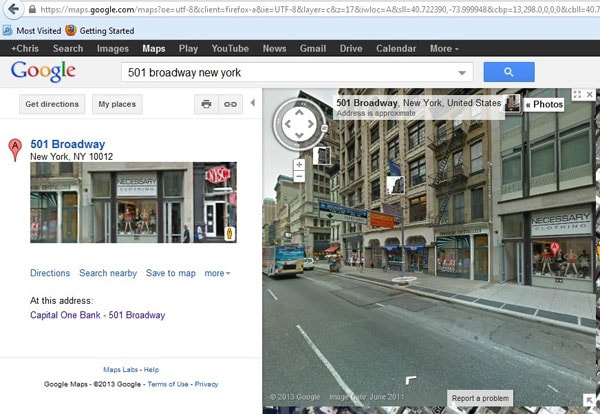 Interest aside, old guns, artillery shells, and bullets don’t do very well when stacked and left to gather dust. By the 1940s, the seven-floor mecca that was 501 Broadway was collapsing upon itself due to the weight of an army corps worth of munitions. Thousands of uniforms from dozens of armies throughout time mingled in boxes, often sold by the pound to theatre companies and marching bands. There was no system or organization to it, with ancient swords mingling next to German Maxim guns. Items in the catalog, once sold out, were never dropped because odds are, there were still some in the warehouse or the island—they just needed to be found. In short, both the warehouse and the island arsenal had turned into immense and unstable junk collections. 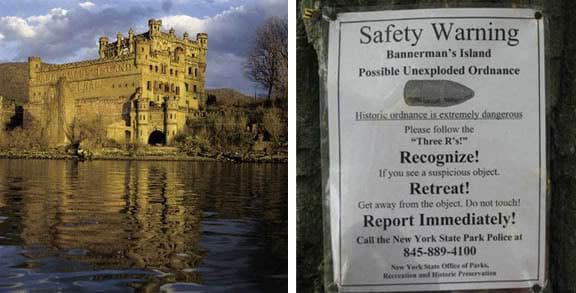 The island operates today as a museum and still has unexploded ordinance on it. (Photo: Brian Altonen, MPH, MS)

Old man Bannerman died in 1918 and by the 1960s his company had followed suit. The NYPD bomb squad and the Army took most of the remaining inventory and burned it up, blew it up, or sank it in the harbor. The island sat moldering and was given to the Taconic Park Commission in 1967. Today a volunteer group, The Bannerman Castle Trust, is trying to preserve the place and the old merchant’s memory. Even though it is largely a ruin, it is on the U.S. National Register of Historic Places. After all, had there been no Francis Bannerman, there would be no IMA, J&G, or AIM Surplus today.

Still, do any of them have their own castle?

This article originally ran on Guns.com as “Bannermans Legacy: The ultimate Army-Navy store” on September 14, 2013 and has been edited for content.