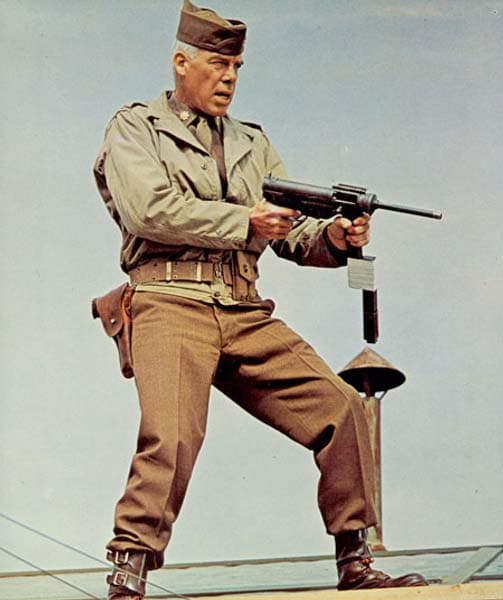 M3 submachine gun in the hands of Lee Marvin in The Dirty Dozen.

World War 3 just broke out, soldier, and Soviet T72s are streaming over the wall into West Germany. You take to your high tech, M1 Abrams tank to greet the Pinkos behind 4.5-inches of reinforced steel but when you take fire and have to bail out, what protection do you have then? Well, just remember to grab your gas mask (dirty Russians) and your new old best friend—the vintage M3 Grease Gun left over from the last World War. As they say in America “if it ain’t broke, don’t fix it”, right?

While the M3 never had to serve in WWIII, it was a war baby of a previous conflict. Just months after the US entered the Second World War; the Army was in dire need of a small, compact submachine gun to equip drivers, squad leaders, tank crewmen, and others who just didn’t have the space to store full sized rifles or carbines. After seeing the crude effectiveness of the British STEN design when compared to their own wooden-stocked Thompsons, the US Army asked for the new submissions to be as simple as possible, and use all metal construction. 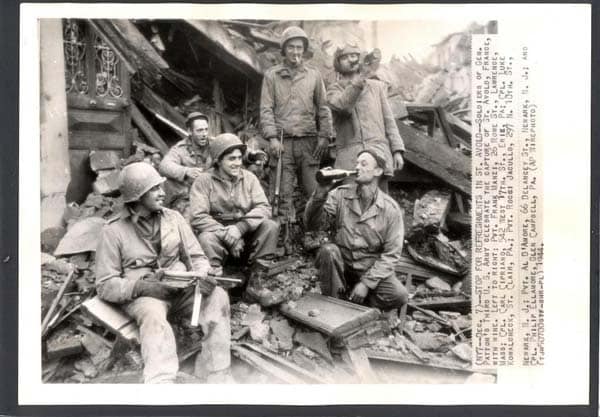 Soldiers of Patton’s Third Army stopping for refreshments after a hard day of greasing. Note the comfy portability.

The dynamic duo of George Hyde and Frederick Sampson, engineers for the Inland Division of GM (yes, that GM) kicked around a few concepts before they settled on the gun that would become the M3.

While Inland was more experienced in making steering wheels than submachine guns, they knew manufacturing, which was fine because Hyde and Richardson knew guns, both holding several patents. Having grown up a toolmaker and gunsmith with German roots, Hyde had even invented an earlier subgun, Marlin’s M2. 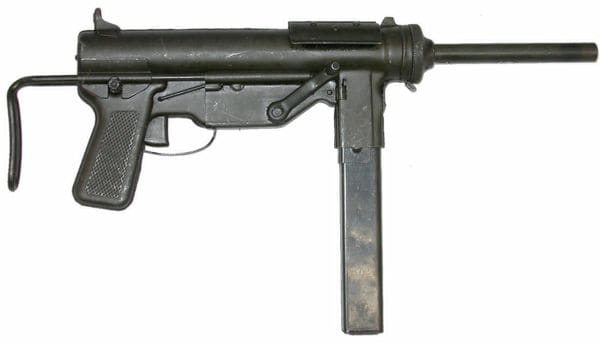 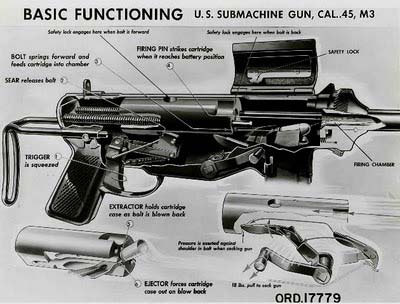 The action of the gun, like many subguns, is a basic blowback design that eliminates the need for an extractor. It fires from an open-bolt, which is quite heavy and does not support great accuracy. Using an 8-inch barrel and a collapsible wire buttstock, the gun had an overall length of 29.8-inches with the stock extended and 22.8 with it closed.

With a loaded 30-round stick magazine inserted and sling attached, the new gun tipped the scales at 10.5-pounds, which gave it balance issues.  It could hose out .45ACP rounds at nice 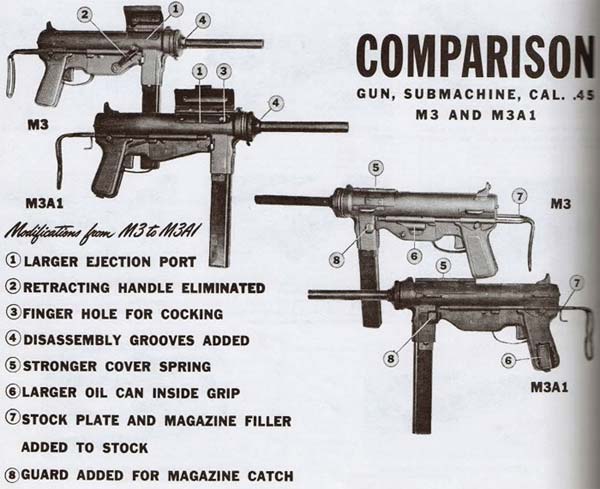 and controllable 400-rounds per minute, and was full-auto only with no selector switch. A toggle bolt just behind the magazine well on the right hand side of the receiver racked the chamber open and popped the spring loaded ejection port cover. Made of all metal stampings, the gun was not easy on the eyes by any means. It had no milled parts, no beautifully turned wood, no adjustable sights. It was just so many pieces of turned sheet metal with a firing assembly and barrel stuck into it—but man did it work. 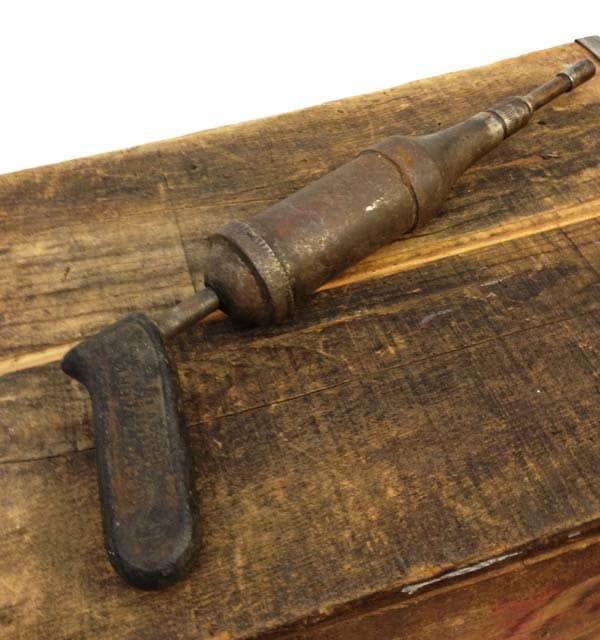 A 1940s era mechanics grease gun. Can you see the resemblance?

It took Hyde and Richardson just two months to design the gun, which the Army accepted in December 1942 as the M3. GM won the contract and started production at its Guide Lamp division, a.k.a. makers of stamped metal headlights, who were practically destined to turn this design into reality. Its distinctive appearance soon earned it the unofficial nickname of the ‘grease gun.’

Overall, Guide Lamp was able to make each grease gun for slightly under $20 including royalties, shipping, R&D, parts, and assembly. When compared to the $225 cost of the Thompson submachine gun, it was a deal and even adjusted for inflation ($20 in 1943 dollars is about $261.95 in today’s money) looks like a bargain. It was so inexpensive that at the time it was considered disposable, and no spare parts other than extra magazines were purchased. It was literally thought to be more expensive to fix than to replace.

Guide Lamp produced 606,694 of the M3 variant submachine gun between 1943 and 1945. These guns were rushed into service in both the European and Pacific Theaters and show up in pictures from Normandy to Bastogne, Iwo Jima to Austria. Many veteran soldiers and marines preferred their battered Thompson subguns to the ugly M3, but it still saw hard service and was grudgingly accepted. 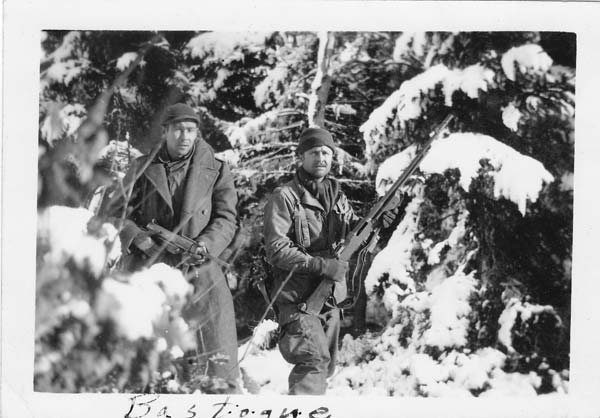 M3 Grease gun at Bastone in WWII, during the Battle of the Bulge. 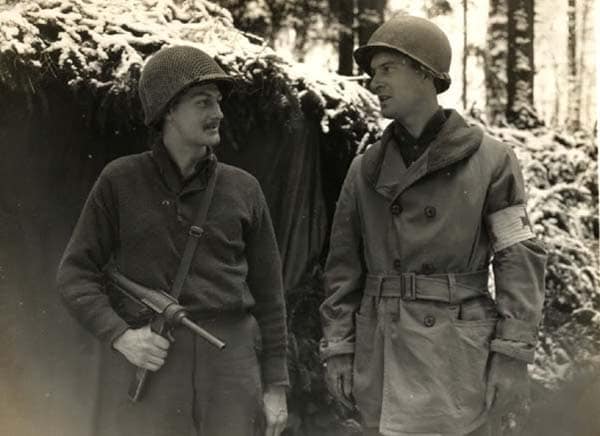 The gun had some minor problems in service, which is to be expected in a weapon that had an R&D of just 60-days. This led to the M3A1 improvement. This variant among other things, lost the charging handle—replaced by simply having the operator stick their finger into a groove on the bolt and pushing it open. It was a simpler time back then. 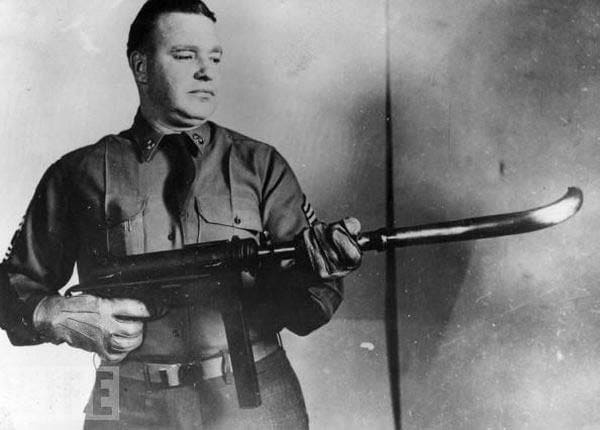 M3 submachine gun with curved barrel for shooting around corners, 1953. 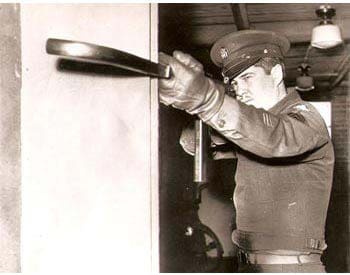 Another 15,469 M3A1 submachine guns were produced before the end of World War II. Some others were made in 9mm with integral suppressors over and around the barrel for use by the shadowy OSS guys operating behind the lines. The Army even experimented with a model that had a curved barrel model that could fire around corners. The bad thing is it broke up the round and had no accuracy, but hey, it still shot around corners.

Of the five SMGs (M1928/M1928A1/M1/M1A1 Thompson, M2 Hyde, M3/M3A1 ‘Grease gun’, Reising M50/M55, and United Defense M42) issued to US forces during World War Two, the M3 had by far the longest service life. While over 1.5 million Tommy guns were made, a figure more than twice as large as the Grease gun, they were rapidly pulled from service after WWII. The M2, Reising, and UDM42 likewise were made in small numbers and largely discarded by the late 1940s by the military. 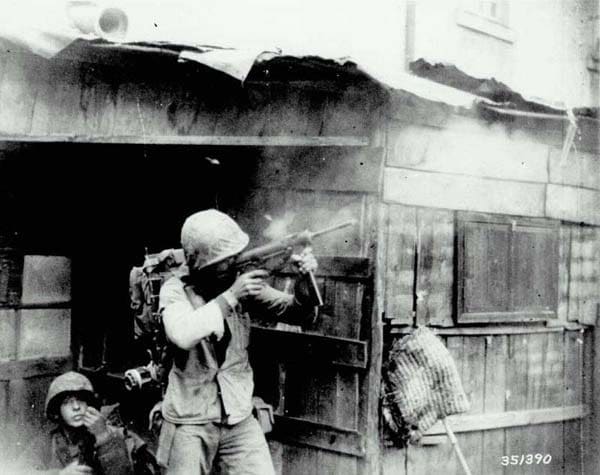 M3 with Marines in Korea. 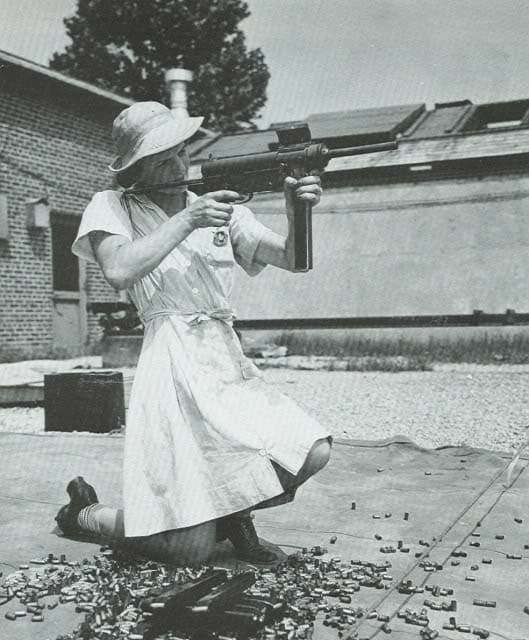 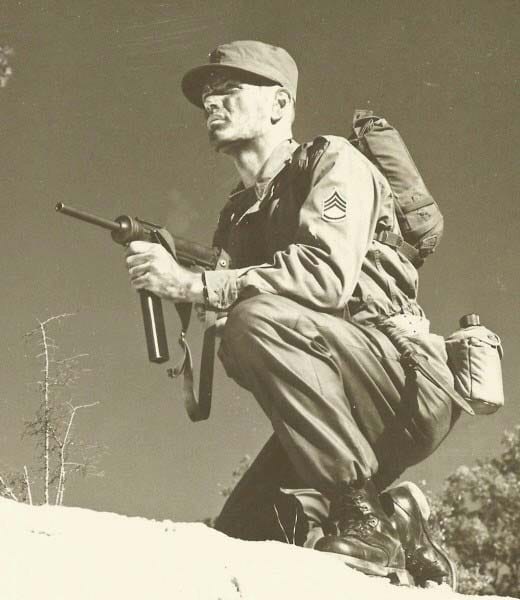 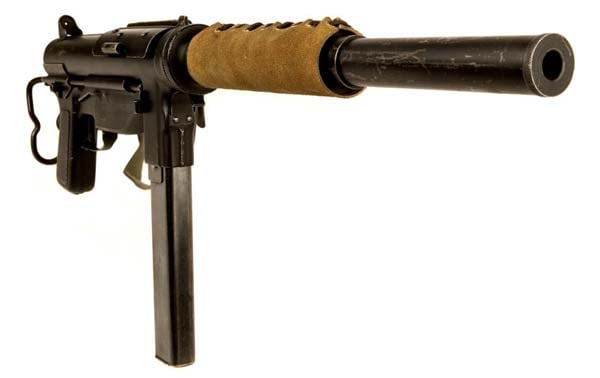 M3A1 with suppressor as used by the OSS. 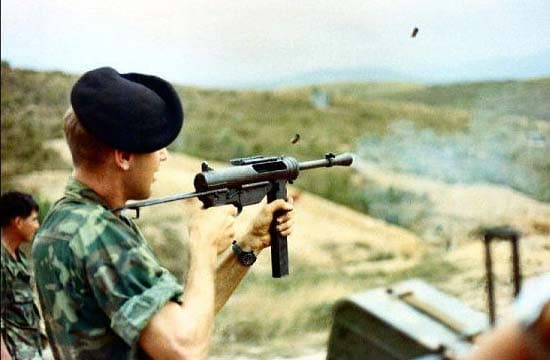 The M3, on the other hand, saw front line service in Korea and, even though it was officially replaced by the M14 in 1957, popped up in Vietnam from time to time. Unlike other US subguns, the military ordered 33,000 more of these made in the 1950s by Ithaca, and for the first time requested large lots of spare parts. You see, the humble greaser had the benefit of being super compact, only 22-inches with the stock collapsed. Even the later shorty CAR-15 carbines, forerunner of today’s M4, couldn’t get down to this dimension. This kept it in limited use with tank and vehicle crews all through the Cold War. 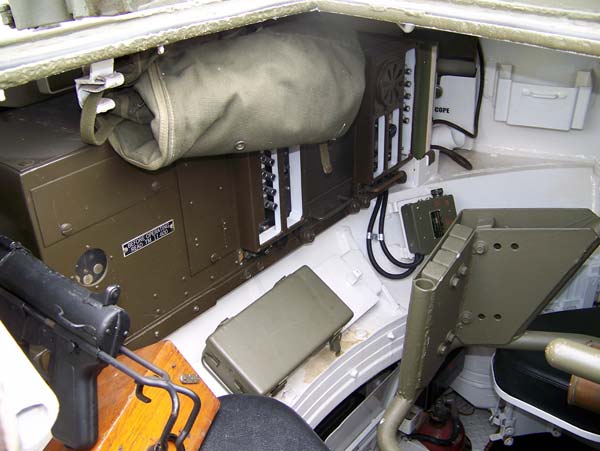 The M3 (right) rode shotgun with US tank crews for more than 60-years from Patton to Schwartzkopf. 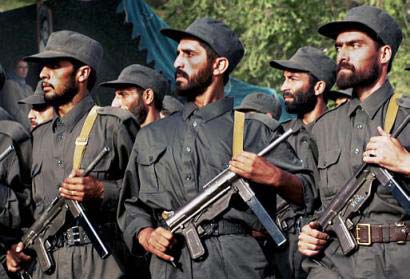 The Afghan National Army has gotten a large number of surplus M3s from the US army.

As such, it was one of the last WWII-era weapons that the US Army used, taking it to combat as late as the first Gulf War in 1991, which doesn’t count the few that have even made their way with National Guard armored units to more recent adventures in Iraq and elsewhere (the last such weapon is the M2 Browning heavy machine gun which traces back to WWI and still remains in service with US troops). While not completely removed for US service, there are very few left out there in unit armories.

And it seems these guns will still be around for a long time in certain military circles. Over the past half century, the US passed surplus 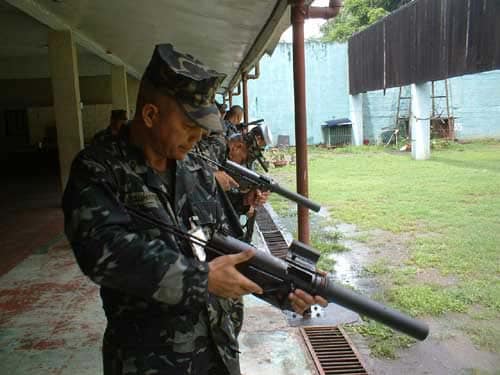 examples on to friendly allies that needed .45ACP subguns such as South Korea and the Philippines where they still serve today. The Philippine Marine Corps started a rebuilding program a few years ago where they took their WWII surplus M3s, added a Picatinny 1913 rail with a red dot and a suppressor and stopped for the day. Argentina made some 30,000 of their own, scaled down, and chambered in 9mm. Shockingly, the Argentine soldiers in the field call it, La Engrasadora (the Greaser).

All in all, not a bad legacy for a gun that was considered disposable and has not been in production for 60 years. 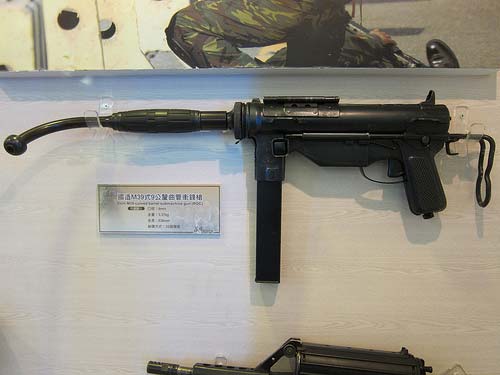 Most of the 600,000+ WWII made M3/M3A1s came off Signal Guide Lamps line. In the 1950s, the Korean War era guns and most of the spare parts were produced by Ithaca, the New York based company known for their shotguns. Over the past 40 years from then till now, parts and guns were constantly swapped around during arsenal rebuilds and local armorer repairs to where most of the late Army M3 were hybrid Frankenguns that may have started out as a WWII M3, then got Korean war A1 magazine wells and other parts mixed in to keep it clicking. The thing is very few of these guns were passed to the surplus market. 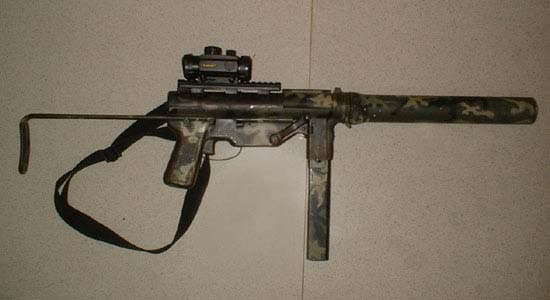 Most surplus parts and kits that have come ashore here in the states have been from liquidated stocks of M3s that were given away to allies who got rid of them on the open market. Magazines have always been plentiful (millions were made) as have random parts. During the 1960s, the Fox and Eagle series semi auto carbines were made from M3 parts and borrowed liberally from the design. Many have taken old Grease gun mags and converted them to run .45 ACP M-10s, H&K USCs, and others. 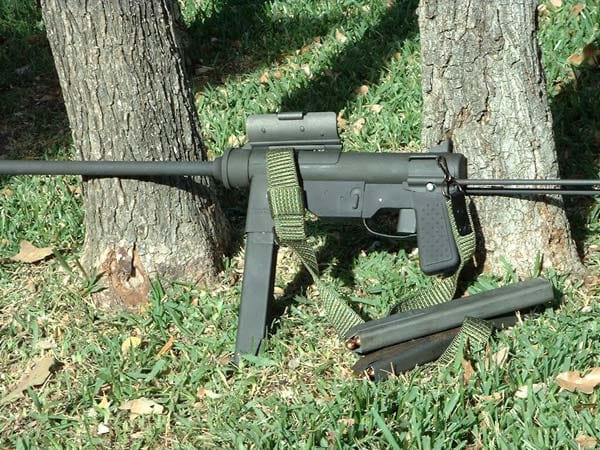 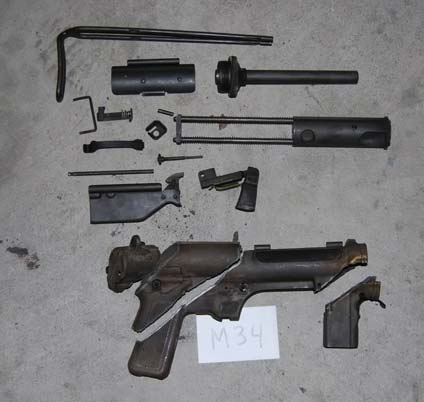 Valkyrie Arms of Olympia Washington has been in and out of the M3 reproduction biz for the past 20 years. They have made several semi-auto closed bolt carbines (16.5-inch barrel), pistols (8-inch barrel but no stock), and SBRs that have sold for inflated prices (up to $3K) to scratch the itch of those who want to get greasy. To add a touch of the original GI feel back to the guns, they use a few handfuls of surplus parts as well.

Speaking of parts, badly torched up parts kits are out there but run about $395. Getting your hands on one of these can lead to a dummy gun on a solid receiver, a nightmare of a reweld if you are a SOT, or a semi-auto carbine, pistol, or SBR build.

And you may even get a little greasy.

This article originally ran on Guns.com as “The M3 Submachine gun: Let’s get greasy” on July, 15 2013 and has been edited for content.