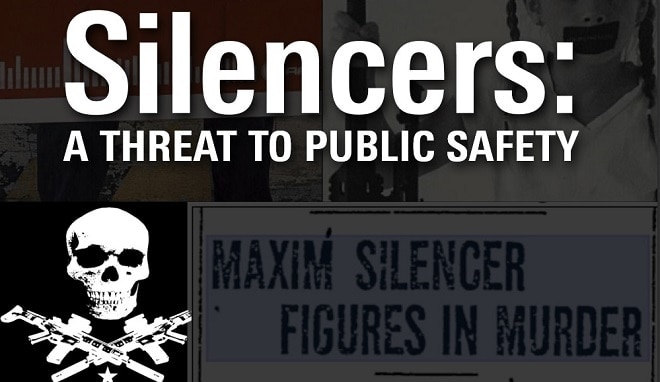 The Violence Policy Center, citing primarily the criminal use of illegal suppressors, feels the devices are a threat. The murder headline used by the group is from 1915. (Photo: VPC)

A Washington D.C.-based nonprofit is arguing that suppressors are a military product marketed with little concern for public safety.

The Violence Policy Center, founded in 1988, has an extensive history of backing pro-gun control legislation including recommending bans on .50-caliber rifles, arguing that concealed carry holders lead to more violence, and calling for a ban on most firearm imports.

The group’s latest effort takes aim at the growing industry in National Firearms Act-regulated suppressors and efforts to deregulate them.

The report released this month, “Silencers: A threat to public safety” briefly details the evolution of suppressors from Hiram Percy Maxim’s 1908 Silencer device through their use in World War II, Vietnam and by special operations forces today in, “all sorts of sneaky ops, from dumping guards to out and out assassinations.”

Moving past the brief historical rundown, the VPC paper goes on to blast the reforms made in silencer and suppressor laws over the past several years, arguing they are due to the gun lobby looking for a new sales avenue. In particular, the group casts shade at the Hearing Protection Act, currently gaining traction in Congress, which would move suppressors out from under NFA scrutiny under the guise of increased safety benefits of the devices.

“But in fact, the campaign to deregulate silencers is merely the latest attempt by the gun lobby and gun industry, in the wake of declining household gun ownership, to market yet another military-bred product with little concern for its effect on public safety,” reads the paper.

Arguing against cutting back the rules on acquiring a suppressor, the VPC contends they have been involved in fatal shootings that “graphically illustrate the threat to public safety that making them widely available to the general public would represent.”

However, of the eight instances of recent criminal use illustrated in the report, almost all are cases of criminals using otherwise illegal devices in the first place.

One involved a terrorist who illegally bought a suppressor from an undercover FBI agent, another was a serial killer who used a homemade device, one was an underground and unlicensed manufacturing operation while another was a militia group who sought unregistered silencers to take on the government. Next on the list is a gang hit in California – a state where legal suppressor ownership by civilians is banned – followed by the use of suppressors by Christopher Dorner and in the murder of a vineyard owner in the same state.

The final case, that of an Ohio man who was found guilty of shooting his boss at work only had a legally owned silencer tied to it because police surmised a suppressor was used in the killing because the sound of the shot went unnoticed, though they admitted noise from shop machines could have also muffled the gunshot. That case, in which the spent shell casing found at the scene matched the defendant’s gun but the recovered bullet did not, is on appeal to the Ohio Supreme Court.

With this in mind, suppressor industry trade groups that have backed NFA reforms term the VPC paper absurd.

“The VPC’s unserious policy paper illustrates perfectly that those opposed to suppressors have no valid reason on which to base their opposition,” Michael B. Williams, general counsel for the American Suppressor Association told Guns.com Monday. “This paper speaks only in generalities and seeks to accomplish nothing more than perpetuate the myth that suppressors are scary.”

Williams contends criminal use of legal suppressors is slim to none.

“As the ATF itself noted in its 41F rulemaking, there is no evidence that any crimes were committed with registered NFA items between 2006-2014,” he said. “Despite claims to the contrary, suppressors are the hearing protection of the 21st century sportsman.”

Suppressor manufacturers are similarly dismayed by the VPC effort.

“It’s unfortunate that the Violence Policy Center is perpetuating myths and hearsay that was born from the minds and mouths of Hollywood,” Joshua Waldron, CEO for SilencerCo, a company whose logos and images were used extensively in the gun control group’s paper, told Guns.com.

SilencerCo, makers of the popular Salvo shotgun suppressor among others, has been active in spreading the word about silencers and similar devices to help demystify what they feel is an incorrect reputation they have been given by organizations such as the VPC. As exemplified by this, the numbers of NFA-registered suppressors have skyrocketed in recent years.

“The boom in the silencer market has been due in large part to the realization by sportsmen and hunters that silencers have a wide range of benefits for the responsible use of firearms,” said Waldron.

The company head pointed overseas to countries like Finland and the UK where, even with comparatively stronger gun laws than in the U.S., they enjoy much more relaxed regulations when it comes to suppressors.

“We should also consider that in many European countries, silencers are required for use during hunting and other sporting activities due to a high regard for the protection of health, hearing, and the right to those in the surrounding area to maintain peaceful conditions. It’s a sad day when Europe is outpacing the United States when it comes to understanding the reality of suppressor usage,” explained Waldron.

The VPC paper was funded by a grant from the Lisa & Douglas Goldman Fund, a California-based foundation which has made extensive donations to gun control groups in recent years to include Americans For Responsible Solutions, MomsRising, the Educational Fund To Stop Gun Violence and the Law Center to Prevent Gun Violence.

As for the ASA, Williams told Guns.com they stand ready to meet with the VPC to help clear up misconceptions.

“We will happily put on an educational suppressor demonstration for VPC’s benefit at any time of their choosing,” he said.