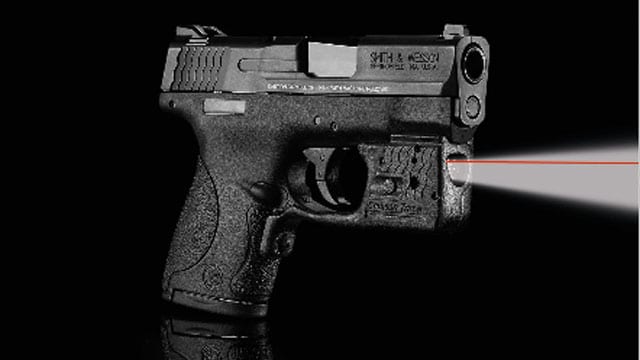 Crimson Trace announced this week the first public appearance of Laserguard Pro, its compact light/laser combo that attaches to the trigger guard, at a live-fire event.

It’s a move to meet apparent demand for compact light/laser devices.  Crimson Trace is the second major company to make such a device that attaches to the trigger guard of concealment guns.  These firearms are typically so compact that popular Picatinny rail mounts aren’t practical as accessory holders.

The Laserguard Pro comes with a green or red laser and a 150-lumen LED light. It has both a master on/off switch and Crimson Trace’s “instinctive activation.” The user may choose to use the laser, light, or both at any time. The light also has a strobe feature. The laser is adjustable for elevation and windage.

In addition to the Shield, the Laserguard Pro is being made for the most popular concealed carry guns including the Glock 42 and 43, and Springfield XDs series.

Manufacturer Suggested Retail Prices are $279 for the red laser sight and $370 for the green laser sight. As of this writing, all models are listed as being on pre-order status, available later this summer.

This offering by Crimson Trace, primarily a laser sight company making a foray into the tactical light arena, is similar to the TLR-6 laser/light device by Streamlight, a tactical light company that added a laser to a similar device for concealment guns.

Though the price of the Laserguard Pro is more than double that of the TLR-6, the latter has a shorter one-hour battery life and no battery replacement program.