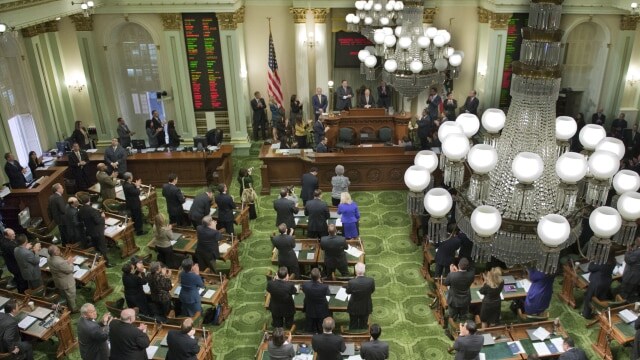 While the Assembly’s video feed through the California Channel is freely accessible, those seeking to use it were prohibited by law. (Photo: Sacramento Bee)

Gov. Jerry Brown signed legislation on Thursday that codified a legal victory allowing the use of videos taken during lawmaker debate in the California Assembly.

In May, Second Amendment advocates took the state to federal court arguing an obscure law preventing the use of the videos violated the First Amendment. On June 22, U.S. District Judge Morris C. England found that public interest favored allowing use of the footage and sided with the advocates by blocking the state from preventing its dissemination.

This led Assemblymember Richard S. Gordon, D-Menlo Park, to introduce legislation, AB 884, putting legislative video in the public domain, which passed unanimously in both chambers last month. Brown signed the bill into law Thursday with a host of other measures without comment.

The new law reverses a 1991 statute prohibiting the use of the public video feed from the Assembly for any political or commercial purpose under threat of up to six months in jail and a $1,000 fine for each occurrence.

The Firearms Policy Coalition sued as they had retained two Emmy-award winning filmmakers, Kris Koenig and Stephen Chollet, who wanted to use footage of the otherwise public debate between lawmakers in videos and political advertisements for the gun rights group but are unable to for fear of violating the law.

“We applaud the Legislature and Governor Brown for recognizing the constitutional issue raised in our lawsuit and appreciate that they responded to the court’s injunction by enacting this much-needed reform bill,” said FPC President Brandon Combs in a statement emailed to Guns.com.

The new law takes effect immediately. Yet, elsewhere on Brown’s desk with a deadline to sign or veto by the end of the month are two anti-gun bills: AB 450, which could hike the cost of gun permits and SB 1332, a bill that could lead to the Department of Justice raiding DROS firearms fee funds under the guise of allowing both spouses and domestic partners as owners of firearms.