Lawsuits against Taurus continue to mount despite settlement 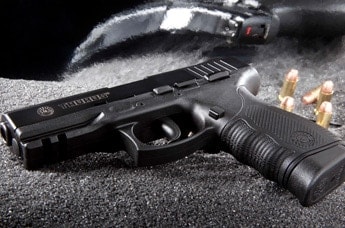 Taurus is fending off another batch of lawsuits regarding a defect that causes certain models to fire if bumped. (Photo: Taurus)

Taurus International continues to wade through lawsuits even after the company settled a $239 million product liability class action suit in federal court over the gun maker’s alleged defective trigger design.

The latest iteration of lawsuits, filed in the company’s home state of Florida, suggest the company knew about the “drop-fire defect” but failed to adequately warn consumers.

In the newest civil case filed in August, Nicholas Adams targets the company and key members after an accident involving a defective Taurus pistol left him with several muscular damage. In October 2014, Adams was stationed at Fort Campbell, Kentucky, with the U.S. Army when his PT 24/7 Pro fell off a bookshelf. The .40-caliber semi-automatic pistol struck the floor and upon impact discharged a round, even with the gun’s safety engaged.

Adams’ case was preceded by another suit filed by the estate of Nelson Martinez, Jr. in April 2016. Court documents show that Martinez purchased a used Taurus PT 24/7 in early February 2014. A couple of months later, while firing the gun at a Florida range, Martinez experienced a malfunction in which the gun fired multiple rounds with only one pull of the trigger.

Martinez reported the issue to Taurus who advised him to send the gun in for repairs. Soon after, Taurus sent the pistol back to Martinez stating that it had been fixed at their facility. A month later, Martinez dropped the handgun and it discharged, striking and killing him. Martinez’s parents filed suit on his behalf.

This year’s suits follow two other cases, also filed in Florida, against Taurus last year. The two cases, brought on by Donald Dewayne Simms, Sr. and Jason Friend, illustrate two more allegations in which Taurus handguns have fired after a jolt.

Simms says his PT 609 fired after he bumped the magazine well while trying to seat the gun’s magazine. The bump resulted in the gun firing, striking Simms in the hand, continuing through his wife’s arm and fatally wounding his 11-year-old son. Simms did not touch the trigger at the time of the accident.

Meanwhile, Friend’s case hinges on his Taurus 24/7 PRO DS discharging after a fall from its holster. The 9mm pistol fired immediately upon hitting the ground and struck Friend in the leg. He suffered massive tissue, bone, nerve and muscle damage as a result of the incident.

Taurus has attempted to have both cases thrown out, but requests for dismissal has been consistently turned down. Though both Friend and Simms’ cases have been tied up in Florida court since last year and neither has received an official trial date as of yet.

All four lawsuits lodged against the gun maker are for unspecified funds plus attorney fees and court costs.

Taurus originally found itself in hot water after Iowa sheriff’s deputy Chris Carter sued the company as the main plaintiff in a 2013 class action case when his PT-140PRO fell out of its holster during a pursuit. The gun fired after hitting the ground.

Carter won his case against Taurus, triggering a federal judge to mandate that the company either repair defective pistols or exchange them for a cash payment of up to $200 per gun. Taurus was required to also pay $9 million in attorney’s fees as well as a $15,000 award to Carter.