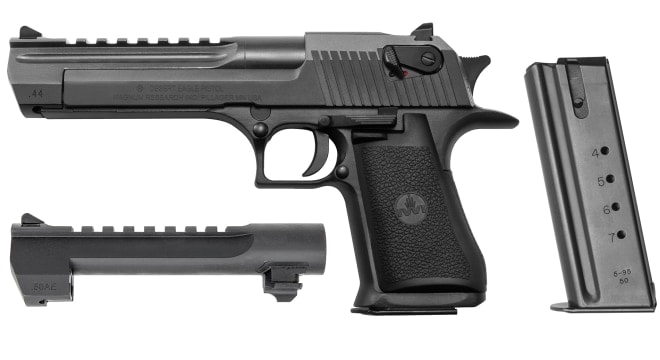 Why choose one when you can have both, right? (Photos: Magnum Research)

If you are a Deagle fan but have problems deciding between running your Israeli supersized pistol in .44 Magnum or .50 Action-Express, Magnum Research now has you covered.

A new offering announced this week pairs a standard black Desert Eagle Mark XIX in .44 Mag in a combo pack that includes a .50 AE caliber barrel in a black finish and a .50 AE magazine. Both barrels are 6-inch and have a combat-type fixed sight as well as a standard top rail.

The company bills the swap between the two upper halves and magazines as taking just 15 seconds, giving the user the quick option of changing calibers on the fly.

To put the package in perspective, the standard 6-inch DE .50 barrel by itself costs $438 and mags run $47, when you add a stock black DE .44 pistol with a 6-inch pipe that MSRP’s at $1,530, prospective buyers save about $65 by picking up the combo, plus they get it all at once as a set rather than piecing it together.

Interestingly enough, MR has a “Desert Eagle Mark XIX 6-inch Component System” listed on their site for $3,035 that includes everything above as well as a 6-inch .357 Magnum barrel, bolt assembly and 9-round companion magazine all in a protective case.

Want to see it? 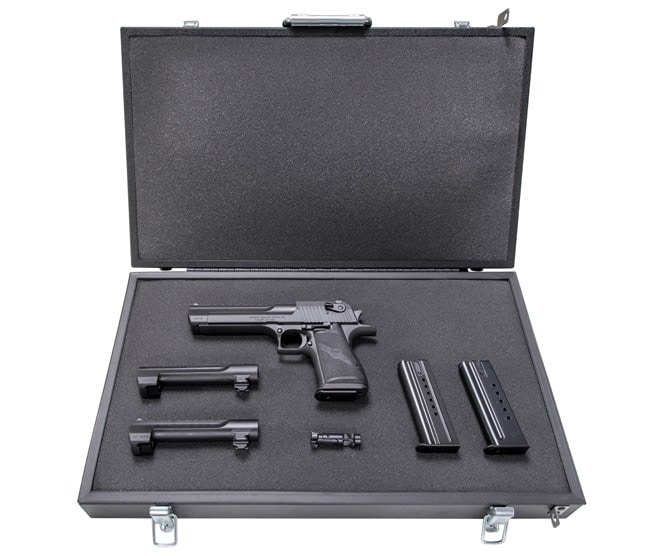