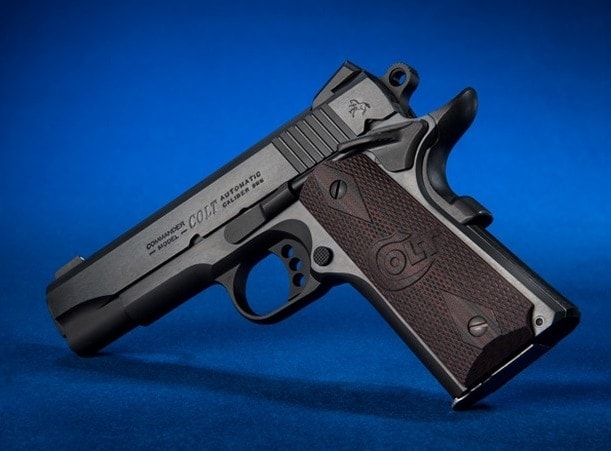 Reaching back into the vault to update a design long on hiatus, Colt announced Thursday that a redesigned version of the Combat Commander is making a comeback.

The new Combat Commander–available in both 9mm and .45ACP (sorry guys, no .38 Super) is an all carbon blued steel 1911 that clocks in at .75-inches shorter than the standard longslide and comes in from the cold with the addition of a dual-spring recoil system, wide-angled cocking serrations, and Novak LoMounts.

Bringing the pistol in line with their current Lightweight Commander and Competition series, Colt has upgraded the rebooted pistol with new ergos.

“The new Combat Commander features an upswept beavertail grip safety and undercut trigger guard to allow users to get good purchase on the grip, and our great Colt G10 grips,” said Justin Baldini, Colt’s product director, in a statement.

In the way of a brief history lesson, the Commander was introduced in 9mm for an Army pistol contract in 1949 aimed at providing a more effective replacement to the .32 ACP Model 1903 “General Officer’s Pistol.” It soon became popular on the civilian market and in 1971 a steel-framed (to differentiate it from the Lightweight Commander) Combat Commander went into production. That 70 Series Colt remained in the stable until 1980 and, after a brief hiatus, was replaced by the 80 Series variant that remained in production in one form or another until 1998 but has sadly been missing from the lineup since then.

Now, to borrow a phrase from John Wick, it looks like the Combat Commander is back, at an MSRP of $949– slightly less than the Lightweight Commander.

As such, it joins the latest edition of the Colt Cobra and a new railgun model of the Delta Elite, announced last week.