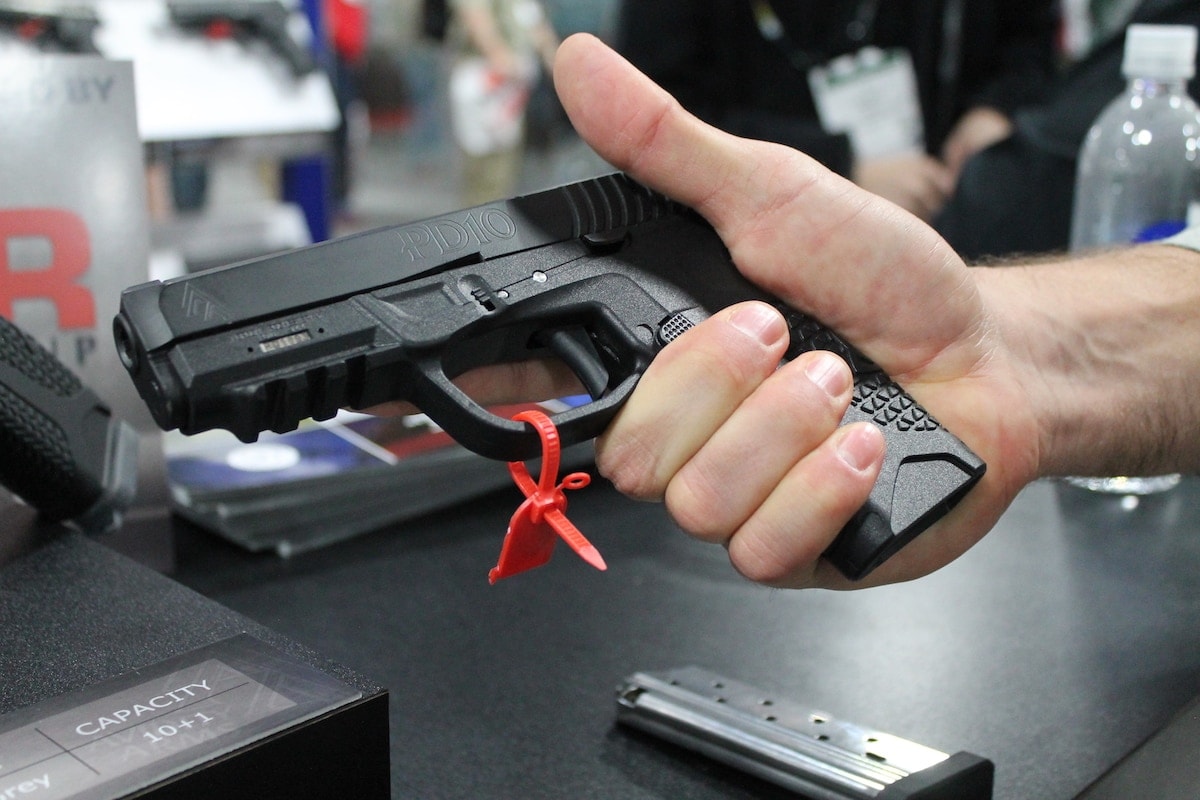 A SHOT Show exhibitor breaks away from his booth to check out the PD10. (Photo: Jacki Billings)

Operating under Avidity Arms, instructor Rob Pincus has been working to bring his pistol design, the PD10, to fruition. This week that became a reality as the new handgun sat nestled in the Eagle Imports booth at the industry’s biggest trade event, SHOT Show.

The PD10 is a snazzy little striker-fired chambered in 9mm. With a 4-inch barrel and 10+1 capacity, this semi-auto aims to break into a market saturated with compact striker-fired pistols. Unlike its competitors, though, the PD10 was designed with one idea in mind — fit. 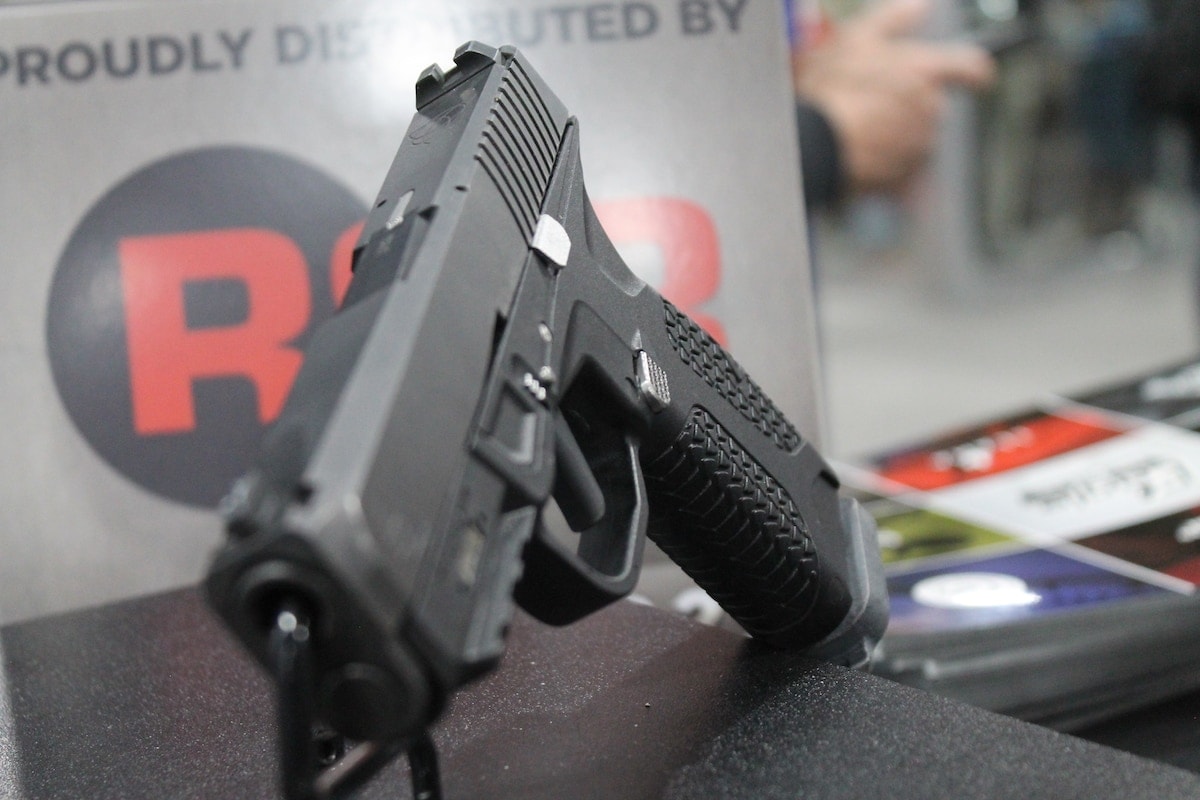 Taking into consideration that smaller shooters need less girth around the grip area, Pincus and his team specifically engineered a slimmer front-to-back grip distance; however, the length of the grip remained to give larger shooters something to hold onto.

“We designed it to fit as many hands as possible and then built a very reliable, very robust gun around that,” Pincus told Guns.com at SHOT Show on Tuesday. 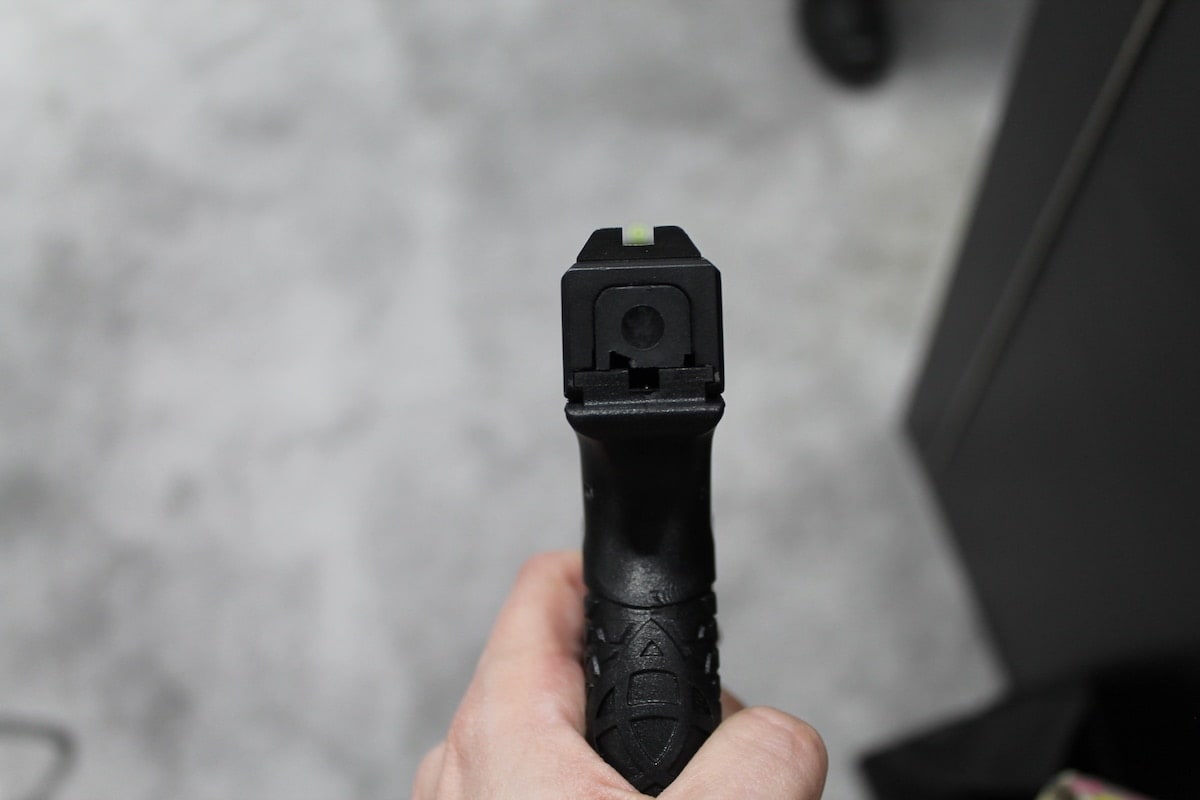 The grip is engineered to fit a variety of hands. (Photo: Jacki Billings)

Pincus’ pistol comes with some interesting quirks that set it apart from standard striker-fire pistols on the market. For one, the slide stop is just that — a slide stop, not a slide release. Pincus said that though other brands sport a stop/release, he doesn’t feel its necessary and instead encourages the a more hands-on approach for driving the slide down. 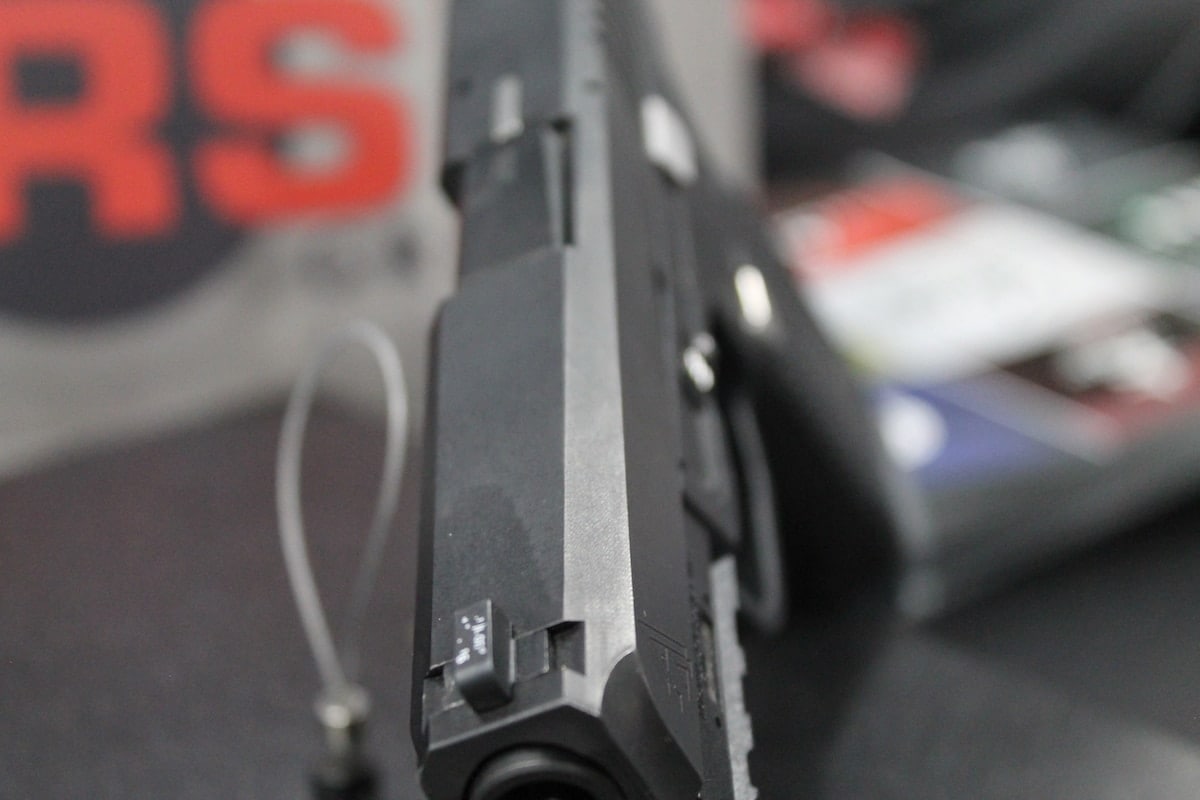 No serrations on the front of the gun; however a Ameriglo Luma Glow front sight helps keeps shots on target. (Photo: Jacki Billings)

Serrations on the back give some more grip to let the slide fly; but the front of the gun doesn’t feature any such serrations.

“I don’t want hands over the muzzle or ejection port. I don’t want press checks. I want people running the gun from back here,” he said gesturing to the gun’s rear. 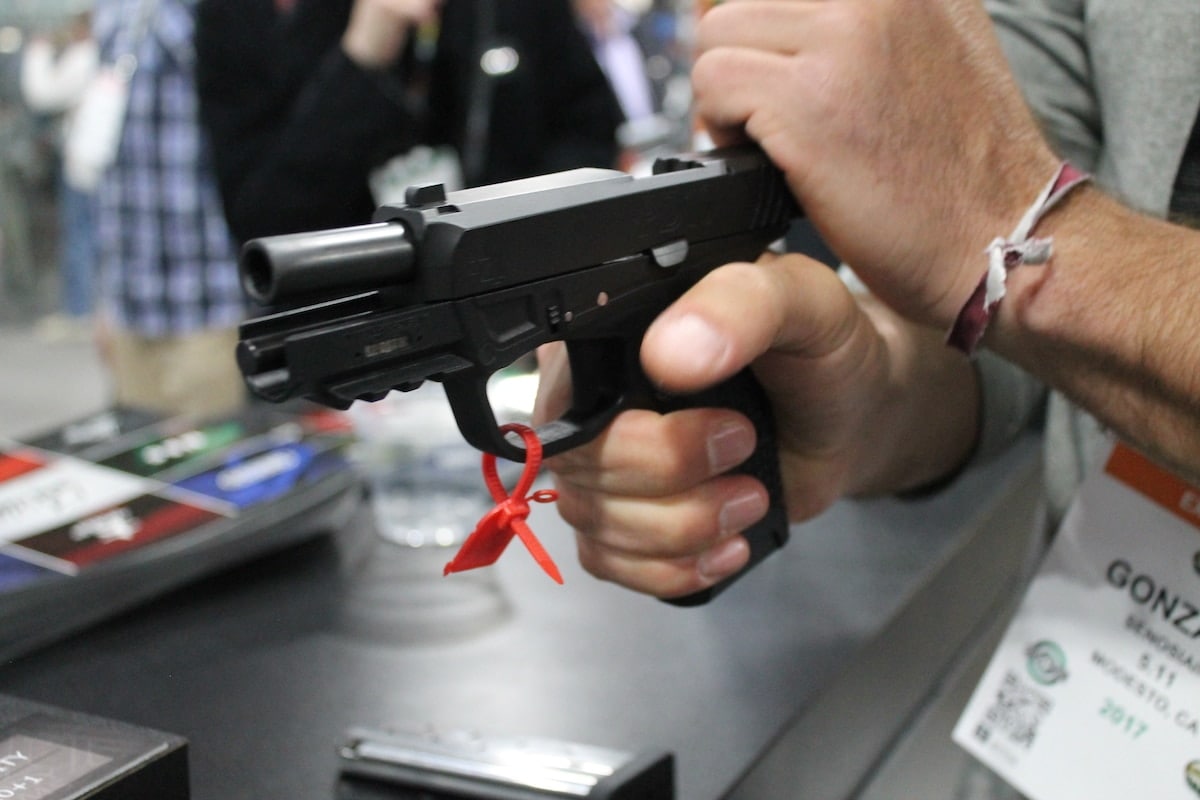 The gun’s slide is easy to manipulate and control. (Photo: Jacki Billings)

Pincus, a celebrated firearms instructor, has clocked thousands of hours on the range with thousands of students. During that time he carefully observed which guns worked and which didn’t as well as how students run their firearms. From there, a sketch on a napkin emerged and the PD10 came to life.

Despite this being the first foray into firearm manufacturing, Pincus is no stranger to designing his own gear. Five years ago he created I.C.E. Claw Emergency Manipulation Sights. Those sights come standard on the PD10 package in addition to an Ameriglo Luma Glow front sight. 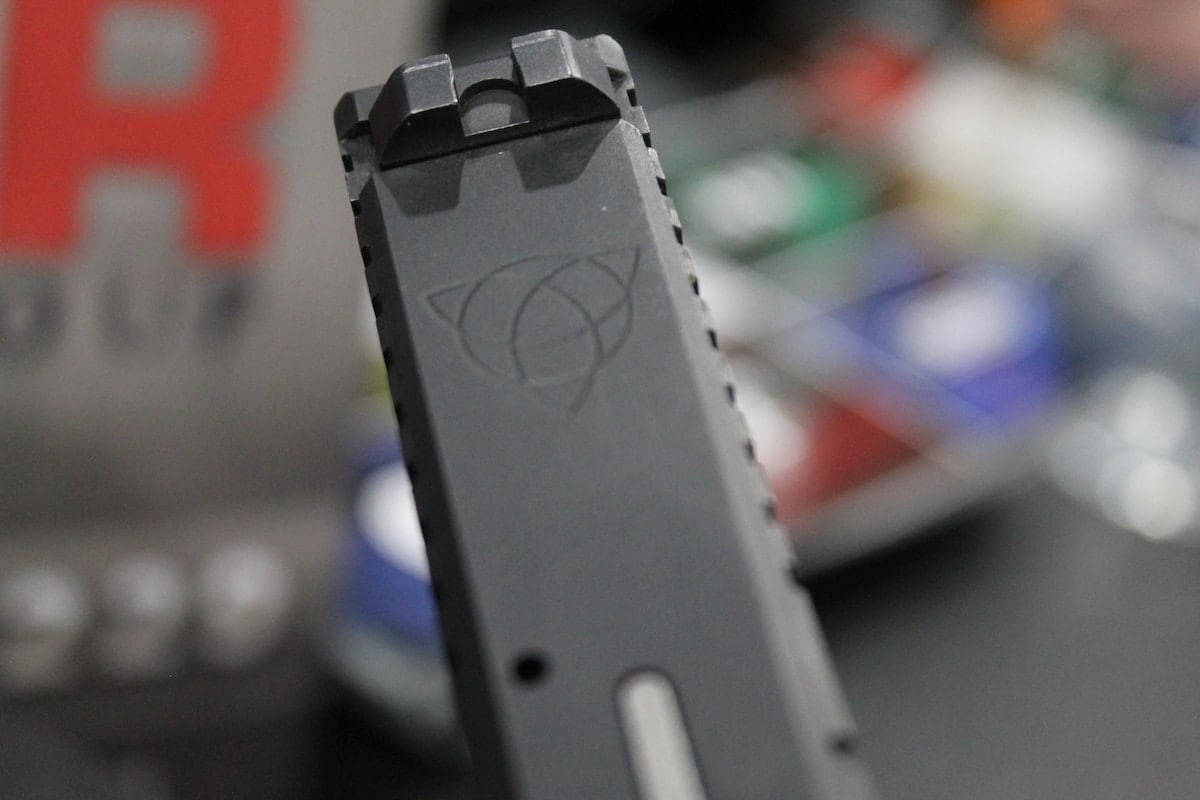 Though the PD10 seems to be a careful creation, it’s hard not to notice the similarities between Glock, Smith & Wesson and Springfield. Pincus doesn’t shy away from that observation, in fact, he explains that all three of those brands have influenced the way in which the PD10 was created. 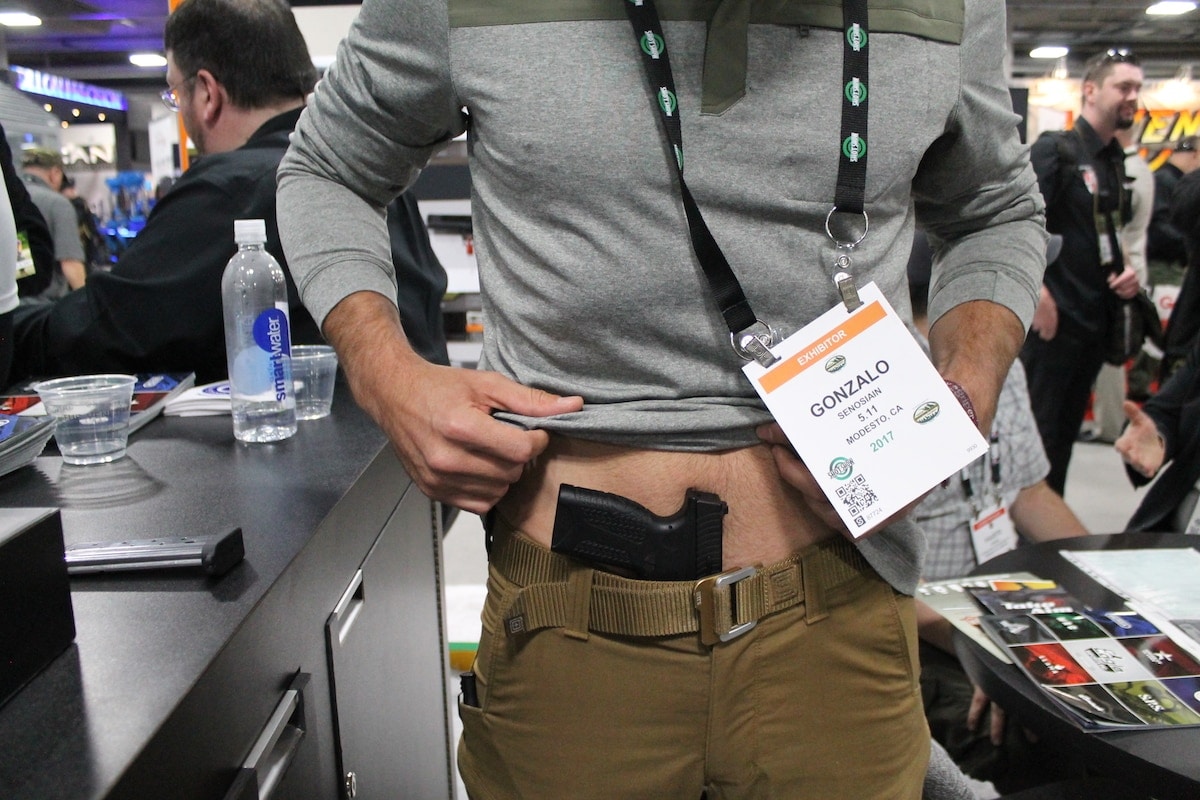 Though the full-size unit conceals well, Pincus says there are plans to downsize to a compact version in the future.

“The compact will come eventually,” he told Guns.com at SHOT Show. “The compact will be cut down to a 6 to 7 shot magazine so it’s easier to conceal and doesn’t print as much. The length will remain the same.”

Going forward, there’s no hard date on when the full-size PD-10 will be in consumers’ hands. Pincus says he’s hoping for the National Rifle Association’s Annual Meeting scheduled for the end of April in Atlanta, Georgia. That all depends, though, on what tweaks are left to be made.

Just recently the gun was revamped to offer a longer accessory rail to accommodate more light/laser options. That minor modification means a longer production time and thus a pushback on potential launch dates. 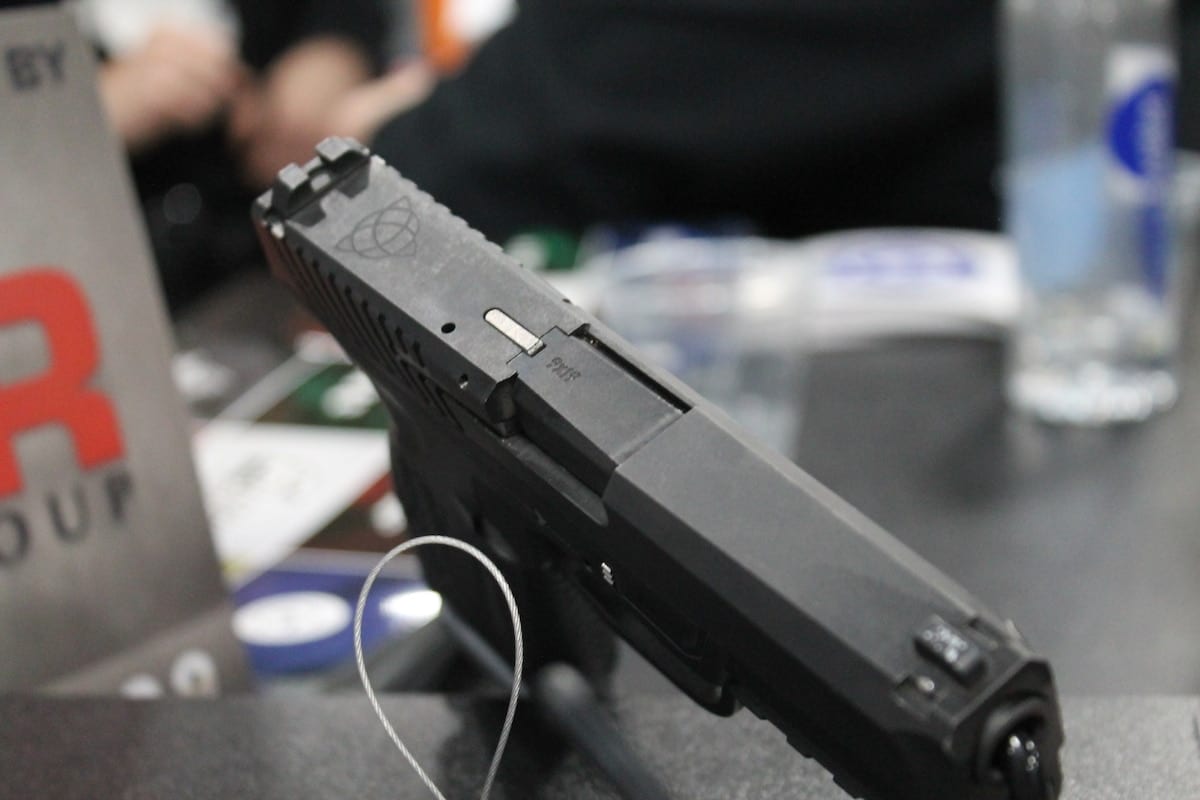 A loaded chamber indicator allows users to visually confirm the presence of a round in the chamber. (Photo: Jacki Billings)

Pincus said as much as he and the rest of the Avidity Arms team wants to see the gun on the market, it’s imperative to get all the kinks worked out now.

“The key is making sure all those major things are right,” Pincus said.

The PD-10 will retail for $499 and will come with a lifetime service contract guarantee for the original owner of the firearm. 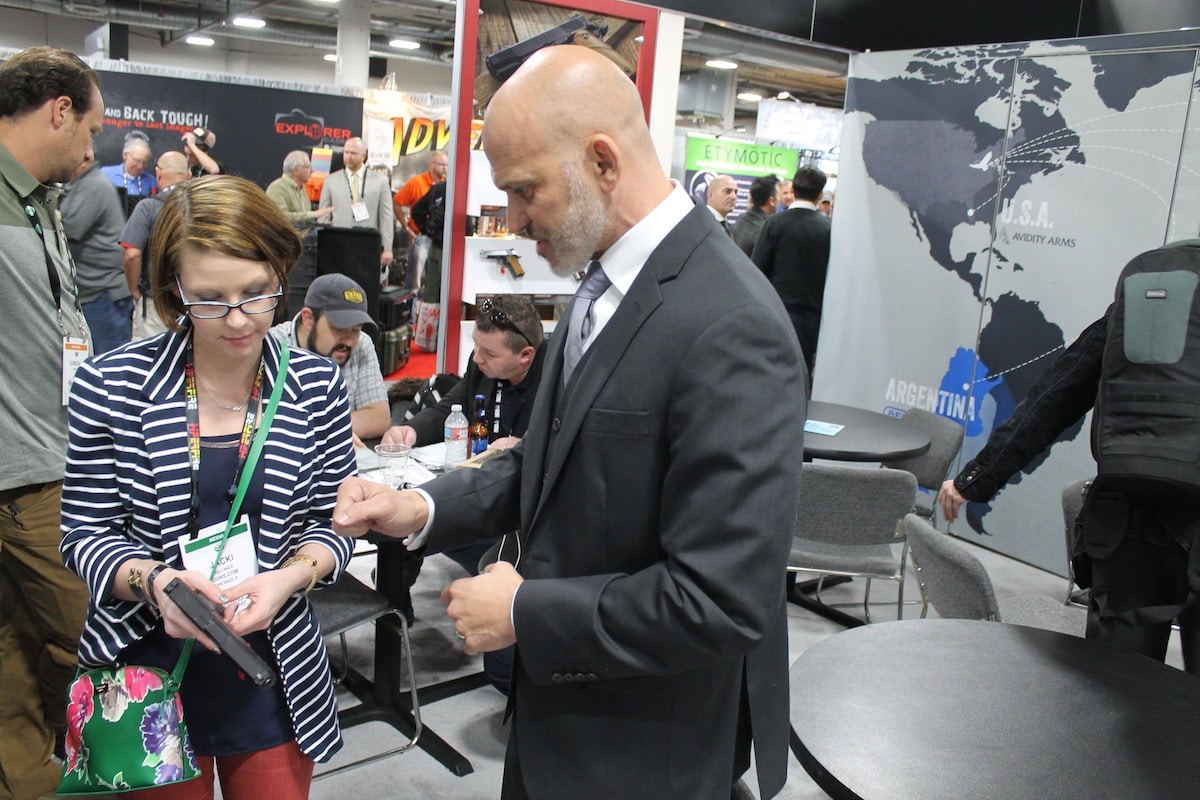 Rob Pincus explains the features of the PD10 to Guns.com while looking snazzy in a three-piece suit. (Photo: Jacki Billings)