The article was originally published on July 11, 2012 as “Do Rifled Choke Tubes Improve Slug Accuracy?” and has been edited for content.

Of the many technological developments intended to improve the accuracy potential of shotgun slugs (and also one of the most summarily dismissed) is the rifled choke tube. After all, claim the device’s critics, how could a few inches of shallow rifling at the end of a smooth barrel do anything to tighten slug groups? Further, won’t the fact that that the slug is engaging the rifling only after reaching near-peak velocity actually be detrimental to accuracy?

Obviously, such theoretical problems with rifled choke tubes must not be as big an issue as the detractors claim. If they were, rifled tubes probably wouldn’t sell well enough for major firearms and accessory manufacturers to justify their continued production.  However, since I’m not one to judge a product based solely on anecdotal evidence, I obtained a rifled choke tube of my own and took it to the range with an assortment of shotgun slugs to see for myself what, if any, effect the addition of a rifled tube would have on slug groups. 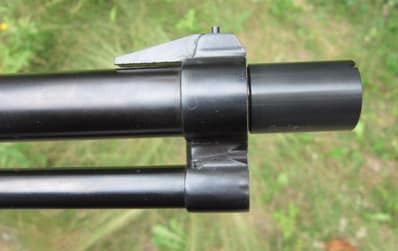 The Carlson’s rifled choke tube installed in the muzzle of the Baikal MP 94. (Photo: Jason Wimbiscus)

The 12-gauge rifled tube I obtained for my test was manufactured by Carlson’s Choke Tubes of Atwood, Kansas and sports a slow, 1 in 35 rate of twist with a groove diameter of .730 inches. When installed in the 12-gauge barrel of my Baikal combo gun the 2-7/8-inch long tube extended 1-1/4-inch past the end of the muzzle. According to the manufacturer, tube length varies depending upon the make and model of the gun to which it is fitted.

Upon examining the tube’s very shallow rifling I had my doubts about how much of an effect the device would have on accuracy. My initial prediction was that the tube would do nothing to stabilize saboted projectiles optimized for fully rifled barrels but would offer at least some additional stabilization for slugs balanced to stabilize from smooth bores (Fosters, Brenneke’s, etc.). 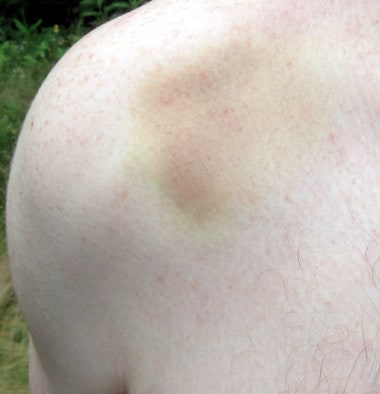 The author’s sore and bruised shoulder. Firing more than 30 12-gauge slugs from the bench in one session takes a toll.

The bulk of my trials concentrated on 50-yard groups as that distance or closer is where most of my game shooting will likely occur while hunting in the Maine woods. For each type of ammo tested, I fired two three-shot groups: one through the rifled tube and one through the straight cylinder tube. The gun used in the test was my 24-inch barreled Baikal MP 94 over/under combo gun (12-gauge over .308 Win.) topped with a B-Square 2.5 power scope. In all, I fired more than 30 12-gauge slugs from the bench during the range session resulting in a very sore and bruised shoulder.

Brenneke Super Sabot slugs are loaded with an interesting, lead-free projectile and are intended for use in fully rifled barrels. I had a box of these slugs collecting dust on my ammo shelf, so I decided to run them through my new rifled choke tube just to prove my hypothesis that the tube wouldn’t adequately stabilize saboted projectiles. 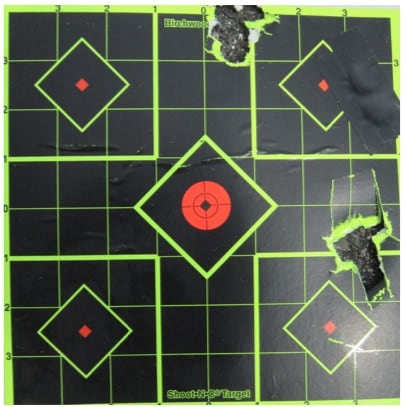 The group printed by the Brenneke Super Sabots through the rifled choke tube. In addition to grouping poorly, the slugs key-holed through the target. (Photo: Jason Wimbiscus)

Not only was the 50-yard group of Super Sabots larger than 6-inches across, examination of the plywood behind the target indicated that the projectiles were key-holing to the fullest possible extent. The holes the slugs punched in the board were perfect profile outlines of the projectiles. I didn’t bother firing the Super Sabots through the cylinder choke tube.

Through the rifled tube the Brenneke K.O. printed a neat, 2-3/4 inch group at 50 yards. This beat out the group printed by the same slug through the cylinder choke which strung along a 3-1/4 inch long horizontal line at the top of the target.

Above: the groups printed by the Brenneke K.O. slug through the rifled tube (left) and the cylinder tube (right). The point of aim on each target was the orange dot at the center. (Photo: Jason Wimbiscus)

Gualandi LBC sabot slugs are engineered for use in fully rifled barrels, but I reasoned that since the lead slug is a hollow base design with an attached plastic cushion/gas seal, it would be appropriately balanced to stabilize from a smooth bore and rifled tube. 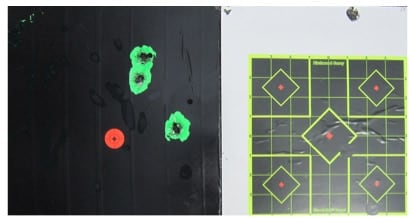 While the resulting 50-yard LBC group from the rifled tube couldn’t be called abysmal – being small enough to fit comfortably in the kill zone of a deer – it certainly wasn’t spectacular at 5 inches. Through the cylinder tube the slugs shot high enough that all but one missed the target completely.

The Remington Sluggers turned out to be the winner of the day. Through the rifled tube three slugs tore one ragged hole 2 inches in length. I once owned a fully rifled shotgun that couldn’t produce such a group at 50 yards with anything I put through it.

The groups produced by the Remington 3-inch Sluggers through the rifled tube (left) and the cylinder tube (right). (Photo: Jason Wimbiscus)

Through the cylinder choke, the Remington Sluggers printed a much larger 4-1/2 inch group. It seems that this particular gun/choke tube system prefers 3-inch, foster slug loads which is something to keep in mind during future load development projects.

In spite of the fact that my battered shoulder was screaming for mercy, I wanted to see if the accuracy improvement the rifled choke tube provided at 50 yards also applied at the 100 yard line.  Since the Remington slugs provided the best group through my setup, I fired one, three-shot group at a piece of poster board stapled to the 100-yard target stand. 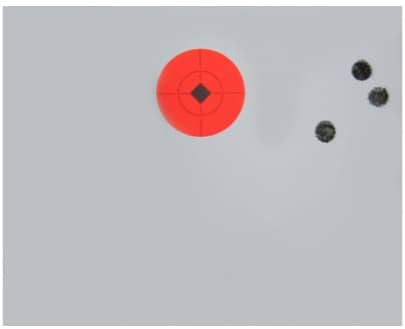 the 100-yard group produced by the Remington Sluggers through the rifled choke tube. (Photo: Jason Wimbiscus)

While the slugs landed noticeably to the right of the point of aim – likely the result of a moderately stiff left to right crosswind – the group itself was more than big game capable, easily fitting into a 3-1/4 inch circle. Had shooter fatigue (shoulder pain) not been a factor, the group may very well have been even smaller. Clearly, the addition of a rifled tube opened a new world for my smooth bore gun.

Why a rifled choke tube? Why not just buy a rifled barrel?

There are numerous reasons why a hunter would employ a rifled tube to improve accuracy rather than a dedicated rifled barrel the most notable being cost. Assuming an aftermarket, fully rifled barrel is even available for a given make and model shotgun, chances are it will cost between $200 and $400. That’s a significant percentage of the cost of a new gun. By contrast, a rifled choke tube can be purchased for less than $50.

Additionally, a rifled choke tube can be employed without sacrificing the versatility of a shotgun. A hunter can easily carry multiple choke tubes and thus be equipped to adapt to changing conditions and circumstances or a change in intended quarry. By contrast, it would be far less practical to carry a second barrel.