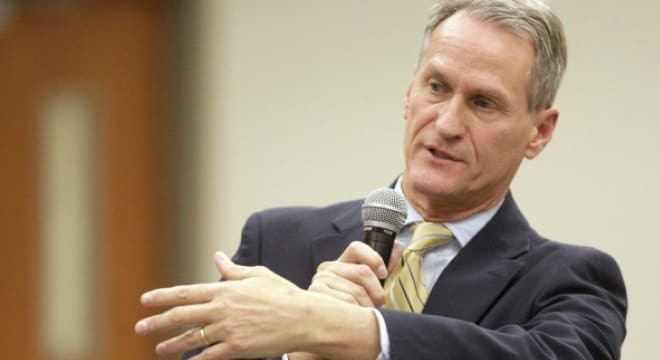 Gov. Dennis Daugaard in his veto measure touted the fact he was an NRA member and supports the right to bear arms but didn’t see the need for constitutional carry. (Photo: Rapid City Journal)

Republican Gov. Dennis Daugaard delivered on a promise to reject permitless carry legislation last Friday, vetoed along with a bill to drop the gun free zone at the state capitol.

The constitutional carry proposal, HB 1072, passed the House 37-30 and the Senate 23-11, arriving on the Governor’s desk on March 9. Daugaard, who shot down similar legislation before, in his veto message painted the legislation as being unneeded due to the what he describes as the state’s minimal and effective permitting system.

“I am unaware of a single instance in which a person who could lawfully possess a gun was denied a permit to carry a concealed pistol,” said Daugaard. “Our permit laws are effective in screening people who are not eligible to carry a concealed weapon. Over the last three years, Minnehaha and Pennington Counties have turned down nearly 600 permit applicants who were disqualified due to mental illness or due to violent or drug-related crimes.”

Daugaard vetoed a similar bill in 2012 and had warned he would do the same this session if given the opportunity. In his message to lawmakers the Governor touted the fact he was an NRA member and supports the right to bear arms.

The legislation, introduced by House Majority Whip Rep. Lynne DiSanto, R-Box Elder, would have retained the current permitting system, which issues basic five-year licenses for concealed carry for $10 and enhanced permits for $143 plus the cost of mandated training. The proposed change would have allowed concealed carry by those lawfully able to possess a handgun without having to first obtain a permit.

DiSanto, who delivered 2,000 letters from South Dakota gun owners to Daugaard’s office last week urging his signature on her sponsored bill, stumped for the concept of permitless carry in the face of the governor’s veto.

“Constitutional carry is about giving the law-abiding citizens the right to carry the way they choose and protect themselves,” she noted on her social media page before going on to call for a veto override effort.

“We have a super majority of Repubs in Pierre, so a veto override should be easy right? NO, because some of the ‘R’s’ don’t know what that means, choosing to raise taxes higher and take away your gun rights,” she said. “Our only hope is those Repubs get pressure from their own districts, and realize their constituents are paying attention.”

An override would need 47 votes in the House and 24 in the Senate.

Also scuttled was HB 1156,  a measure that would allow a concealed pistol in the South Dakota Capitol building in Pierre if the person carrying it had an enhanced permit. The bill had passed the House 46-20 and the Senate 19-15.

Daugaard wrote in his veto memo that armed law enforcement officers assigned to the Capitol were better trained to respond to an incident than the average enhanced permit holder — who is mandated to receive at least eight hours of training — and any use of force on the building’s ground would be better handled by the state police.

“During the legislative session, meaningful debates among the public and legislators are frequent and oftentimes passionate,” said Daugaard. “Where emotions can run high, it is important to be protected by people who are routinely trained to manage dangerous situations.”