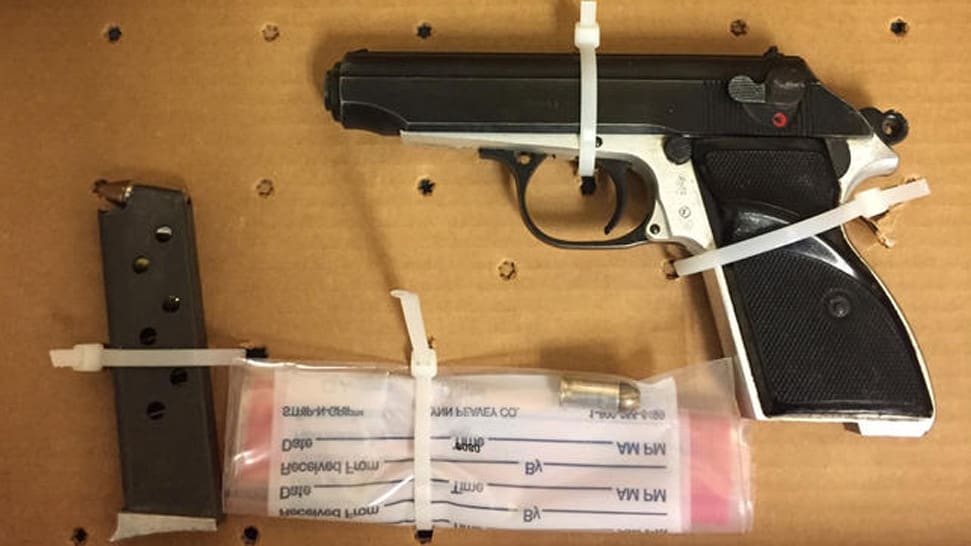 A 9mm TGI pistol recovered from a Hartford suspect in November 2016 on a fancy backdrop. (Photo: Hartford Police Dept.)

The National Rifle Association offered praise to President Trump and the Justice Department for increasing federal gun prosecutions, but it’s unclear it’s actual impact as the rate of violent crime has increased.

“The sad truth is it was all about politics,” Cox said of Obama, arguing that while he expressed concern about gun violence, he intentionally decreased prosecutions of criminals caught with firearms in order to advance gun control policies.

The Justice Department last week touted a 23 percent increase in federal gun prosecutions in 2017’s second quarter. The total number jumped from 2,149 last year to 2,637. Attorney General Jeff Sessions credited efforts pushed by the Trump Administration and a Justice Department memo he sent to prosecutors in March telling them to focus on gun charges..

Yet, Sessions also noted violent crime is up, with 27 of the nation’s 35 biggest cities seeing a rise in homicide rates. According to gun violence researchers, gun deaths across the country are up 12 percent this year and gun injuries are up 8 percent. While the violent crime rate is still at a historic low from its peak in the 1990s, it saw a slight uptick last year, which many experts called an outlier.

Policy expert and Brooklyn College professor Alex Vitale told Newsweek that he wonders if the increase in federal gun charges actually represents more arrests. “My guess is that the increase in the number is the result of taking cases away from local prosecutors, rather than some big increase in federal law enforcement arrests. Guns have always been a priority, and it’s not like they were just letting people go before,” he said.

“It’s also possible that they just sped up some existing cases, which won’t really [affect] numbers in the long run. Let’s see if there really is any difference at the end of the year,” Vitale added.

The Transactional Records Access Clearinghouse published a 2013 study showing gun prosecutions hitting a 10-year low in 2012, with fewer than 8,000 cases. Yet, TRAC noted that state and local gun arrests dwarf federal actions. Using data available at the time, from 2011, they identified 153,519 arrests for weapons by state and local law enforcement, but it’s unclear how many resulted in charges filed. Other than the FBI’s crime report, there’s no recent comprehensive study showing state and local gun prosecutions.

TRAC also keeps monthly tabs on prosecutions brought by the ATF, the agency tasked with enforcing federal gun laws. The group’s analysis shows June’s data also up — some 15 percent — from the year before, but prosecutions still down — by about 3 percent — from where they were in 2012.

According to government records, 8,576 total gun charges were filed in federal courts in 2016, with the majority, 57 percent, being possession by a prohibited person. ATF data shows the agency initiated 31,853 investigations into gun crimes, more than 8,800 cases recommended for prosecution, 6,357 indictments, and 5,517 convictions. In last week’s statement, the Justice Department said it projects it will prosecute 8 percent more gun cases by the end of Fiscal Year 2017 than in 2016, for a total of 12,626.