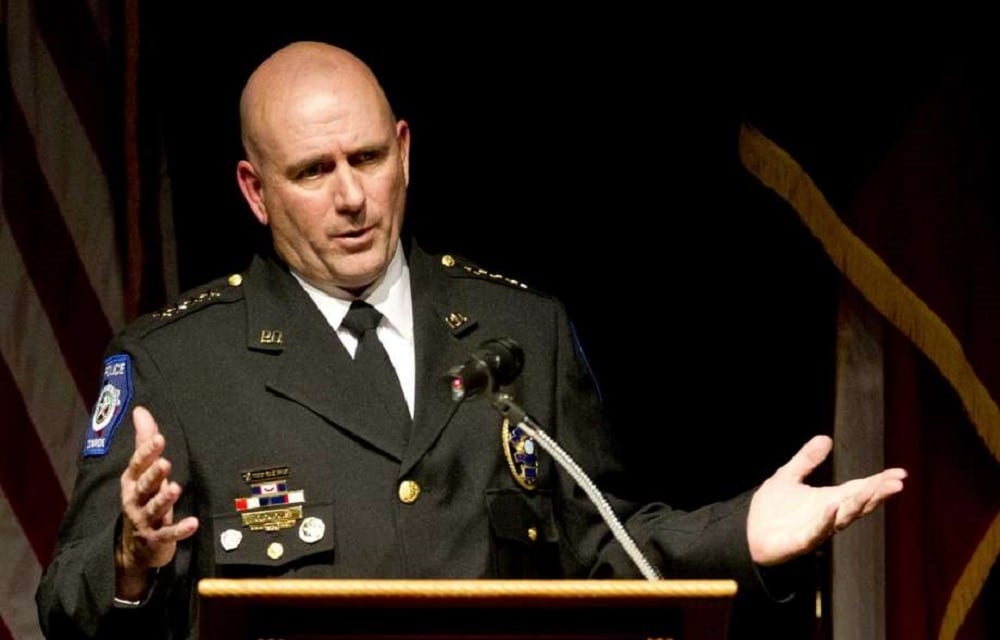 A Texas police chief was asked to leave a doctor’s office Tuesday for carrying his handgun, despite wearing his police badge and ID.

Conroe Police Department Chief Philip Dupuis shared the story on Facebook, saying he had “never been so embarrassed (pissed) in my 35 years of law enforcement.”

Dupuis relayed a more detailed account to Houston’s Channel 2 News about the incident, which occurred while checking in for a Tuesday appointment at the Texas Ear, Nose and Throat Specialists in The Woodlands.

“I walked in, gave them my name and my appointment time. They took my information; my drivers license and insurance card and then the clerk asked me to go put my gun in my car,” Dupuis said. “She said, ‘it’s our policy. No guns allowed.’ I said I’m a police officer and I’m not going to put my gun in my car.”

The chief then left the office with his documents, feeling that the staff member had grossly mishandled the situation, and then took to Facebook to voice his concern. After seeing his Facebook post, a manager with the practice later called Dupuis to apologize and issued the following statement:

“We regret the situation yesterday involving Chief Dupuis and a member of our staff. We have personally apologized to Chief Dupuis for any inconvenience or embarrassment he experienced. Our team is working diligently to insure that a situation like this does not occur again. Our company values law enforcement officers and first responders for their selfless service and will serve them and our communities with the utmost respect.”

While the Texas ENT has informed all supervisors at their various offices about the incident and indicated it was not how the situation should have been handled, Dupuis said he was still not satisfied with an updated Facebook post.

“While the office has made general statements on Facebook that the actions of their employee(s) were out of line and improper, I ask them to affirmatively state that on duty or uniformed police officers that are displaying the proper credentials will not be treated this way in the future,” Dupuis said. “Officers should not be required to disarm or change out of their uniform while seeing their doctors or other professionals.”

The chief also thanked people for showing their support after his initial posting, saying, “I think Texas, Ear Nose and Throat Specialists has heard the passionate voice of Montgomery County.”

According to Texas state law, police officers are legally allowed to carry their guns into private businesses, even if those businesses have posted signs prohibiting firearms, as did the Texas ENT.

Dupuis said this was the first time in 35 years as a police officer that he had ever been asked to leave a business over carrying his firearm.