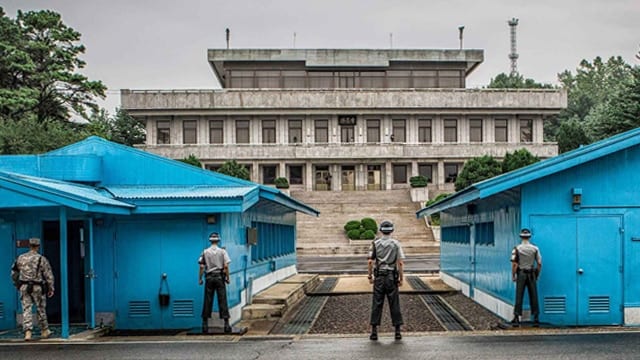 A North Korean soldier was shot by fellow troops Monday as he defected to South Korea, a rare occurrence that comes as President Donald Trump wraps up a two week trip in Asia where he called on leaders there to help confront the nuclear threat from the North.

Four North Korean soldiers fired nearly 40 rounds at their fleeing comrade, hitting him five times, according to CBS News. It was the first shooting in the Joint Security Area in the village of Panmunjom in more than 30 years, according to the South’s military.

South Korean soldiers did not open fire during the ordeal. The soldier was wounded, but made it to the South where he underwent a five hour surgery. A hospital outside Seoul said the bullets were removed, but he now relies on a breathing machine.

Officials with South Korea’s military say he drove a Jeep to the border, but began running when a wheel got stuck in a ditch. That’s when he was fired upon. He was found under a pile of leaves, about 55 yards south of the border. South Korean soldiers had to crawl towards him to rescue him.

Some 30,000 North Koreans have defected to the South, most of them through China, since the end of the Korean War. The last time gunfire rang out at the Joint Security Area was in 1984. In 1998, a North Korean soldier defected to the South without any shots fired. The same thing happened again in 2007. In 1976, North Korean soldiers killed two American army officers in a dispute over a poplar tree near the Demilitarized Zone.

Monday’s defection came as a joint naval exercise took place off the coast of South Korea. Three American aircraft carriers are positioned off the country’s east coast. It’s the first time in more than a decade that such a show of force has been on display in the region, and it comes as President Trump continues to ratchet up pressure on North Korea’s Kim Jong Un to give up its nuclear ambitions.