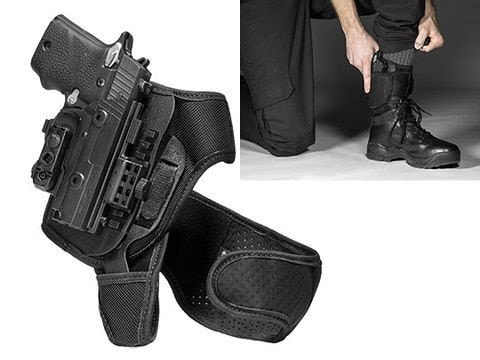 Alien Gear adds to the ShapeShift system with the introduction of the new Ankle Holster. (Photo: Alien Gear)

The ShapeShift Ankle Holster acts as an alternative for concealed carriers wishing to forgo traditional waistline concealment or for those needing to pack some extra heat in the way of a backup firearm. The holster utilizes a two-strap system, anchoring at the heel. This design paired with a polymer spine prevents the rig from slipping down the leg, according to Alien Gear.

The setup is compatible with the company’s ShapeShift Modular Holster System, allowing users to swap between a variety of carry modes to include inside-the-waistband, outside-the-waistband and “tactical” style carry.

Alien Gear says the ankle rig has been in development for two years, as the company engineered and tested the design.

“I can guarantee you have never seen an ankle holster like this,” Alien Gear holster designer Taylor Vold said in a press release. “The time and effort that has been put into this product ensures that it is truly one-of-a-kind.”