The full-sized M17 vs. the more compact M18. The guns use the same interchangeable fire control unit and magazines– either flush-fit 17-round or 21-round extended mags. (Photo: Chris Eger/Guns.com)

A report says the nation’s seagoing branch will go with the smaller version of the Army’s Modular Handgun System, the Sig M18, to replace legacy 9mm pistols.

The Navy will phase out its current M9 and M11 handguns with the M18, the smaller-framed version of the Army’s newly adopted handgun. The MHS winner, based on the Sig Sauer P320 family, can utilize two different-sized frames, the full-sized M17 and a more compact M18. While the Army is issuing the gun in a kit with both frames and one interchangeable plug-and-play fire control unit that makes up the guts of the handgun, the Navy will go with just the single M18 frame.

Navy spokesman Ben Anderson told Military.com that “money has been allocated for contracting this year, with delivery to the Navy to commence in FY19” for some 60,000 pistols.

The Navy currently uses the M9, a variant of the Beretta 92F, and the M11, a more compact pistol based on the Sig Sauer P228. While the M18 is slated to replace both, there is no word on if other platforms used in smaller numbers by Naval Special Warfare units such as the Mk23 and Mk24 pistols — .45ACP guns made by Heckler & Koch — as well as various unit-purchased Glocks, and the Mk25 — a navalised version of the Sig P226 in 9mm — will be replaced by the new Sig as well.

All branches of the U.S. Armed Forces have placed orders for the M17/18 Modular Handgun System, according to Sig Sauer. 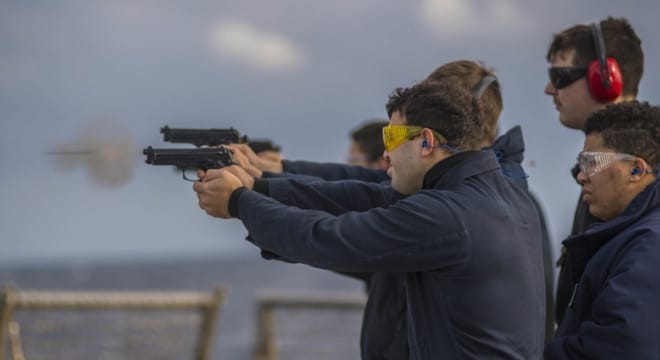 The Navy currently uses the M9, a variant of the Beretta 92F shown above, and the M11, a more compact pistol based on the Sig Sauer P228. The new M18 will replace both. (Photo: U.S. Navy)