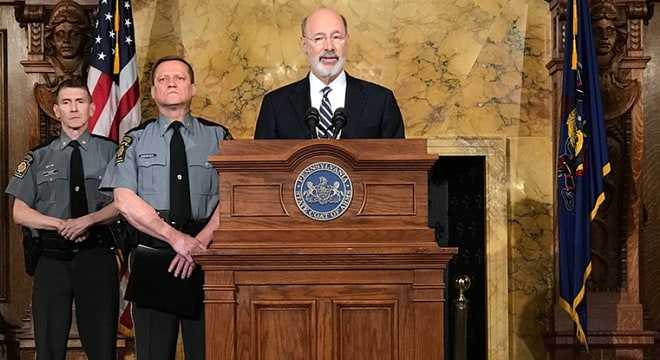 Gov. Tom Wolf, a Democrat, and state lawmakers are embarking on a move to expand background checks to all gun transfers in the Keystone State.

Wolf announced the initiative in a press conference Monday in conjunction with the Pennsylvania State Police to close what he termed “dangerous loopholes” in state law that allowed some guns to change hands, such in private face-to-face rifle sales, without background checks completed by state authorities.

“We should pass legislation that requires all those who wish to purchase a firearm to go through a State Police background check; universal background checks are one of the best ways we can keep weapons out of the hands of dangerous individuals,” Wolf said.

The move would increase the burden on the state’s already controversial background check service. Surveys show that private gun sales account for as much as 13 percent of all firearm transactions.

Most states since 1998 have relied on the FBI’s National Instant Criminal Background Check System alone to conduct background checks. A minority of states — Pennsylvania included — are what is known as “Point of Contact” states, with local authorities, typically using the NICS database in part, to clear checks on gun sales. The Commonwealth uses what is termed the Pennsylvania Instant Check System for both licensed over the counter gun sales and when clearing applicants for a concealed carry permit. PICS is often characterized by opponents as troublesome, drawing millions from the state’s coffers while delaying gun transfers as much as 15 days and has been subject to lengthy outages in the past. In comparison, the NICS process allows gun dealers to proceed with a transfer after a maximum of three days.

Still, acting State Police Commissioner Lt. Col. Robert Evanchick is in favor of upping the load on PICS in the interest of public safety. “In the commonwealth, a firearms transaction between two private parties does not require a background check if the firearm falls within certain criteria,” Evanchick said. “It is this void in the current law we are in support of changing. The Pennsylvania State Police encourages closing this void in the current law and requests that all firearm purchases and or transfer of ownership require a universal background check.”