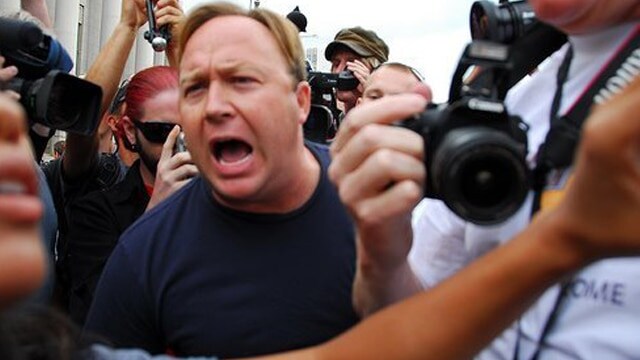 Allegedly, Alex Jones used to be comedian Bill Hicks until he faked his death. (Photo: InfoWars via Facebook)

Newtown families have filed suit against conspiracy theorist Alex Jones and his media companies like InfoWars for perpetuating false narratives about the 2012 Sandy Hook school shooting.

The families of six victims and one first-responder say Jones maintaining his baseless conspiracies about the attack and urging others to follow suit has resulted in their further victimization as they “have faced physical confrontations and harassment, death threats, and a sustained barrage of harassment and verbal assault on social media.”

In the lawsuit, they argue Jones launched a “Sandy-Hook-based business model,” meaning Jones and his companies use “fabrication, propagation, and amplification” to spread “conspiracy-minded falsehoods” about Sandy Hook and other tragedies. The effort taps into an audience’s “paranoia, social anxiety, and political discord” that in turn generates views, which increases ad and sales revenue.

Jones’ website offers products that are oftentimes promoted as solutions to the very issues he discusses. “In other words, the Jones defendants concoct elaborate and false paranoia-tinged conspiracy theories because it moves product and they make money,” the lawsuit says.

The 39-page complaint, filed in a Connecticut state court last week, lists more than two dozen times Jones, under the guise of a journalist, claimed the Sandy Hook shooting — that claimed the lives of 20 first-graders and six educators — was a hoax oftentimes saying the government staged or fabricated the incident to advance gun control. He also repeatedly accused victims’ families of being crisis actors.

This is the fourth defamation lawsuit against Alex Jones this year. In April, two other Sandy Hook families sued Jones for his truther narratives. Jones was named in another by a Massachusetts’ man whom Jones misidentified as the gunman in February’s school shooting in Parkland, Florida.

The Newtown families are seeking damages that exceed $15,000. Relief includes monetary and punitive damages plus court costs and attorneys’ fees.