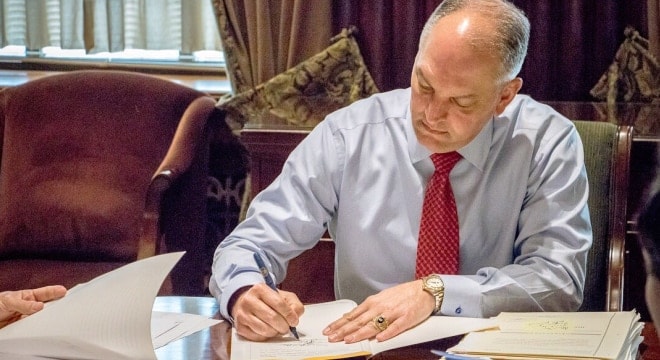 The proposal, SB 402, changes state regulations on security guards in places like churches and synagogues while dropping the current eight-hour annual training requirement for approved concealed handgun permittees to carry firearms while attending services. The bill was popular with lawmakers, passing the House 81-10 and the Senate 34-3, veto-proof margins that all but ensured a signature from the Democrat Edwards — who approved the bill without comment.

The new law makes it possible for volunteers who are law enforcement or have a valid concealed handgun permit to serve houses of worship as armed security, either in a paid or unpaid capacity. Prior law did not allow concealed carry unless the permit holder had eight hours of tactical training each year, a requirement the modification signed this month leaves behind except in cases where it is required by the church’s insurance underwriter. Neighboring Mississippi adopted a similar law granting allowances for concealed carry by members of designated church programs in 2016.

The Louisiana measure was prefiled in March by Republican state Sen. Neil Riser, R-Columbia, four months after a man killed 26 parishioners at a Sunday morning church service in Sutherland Springs, Texas. The killer was interrupted by a responding neighbor who confronted the suspect with a rifle.

Louisianans have nonetheless seen violence in their own churches. In 2006, a man killed four people at The Ministry of Jesus Christ church in Baton Rouge before abducting his wife from service while in 1999, a homeless man killed three including his estranged wife at the New St John Fellowship Baptist Church in Gonzales.