Why AIWB is attracting a new generation of gun owners 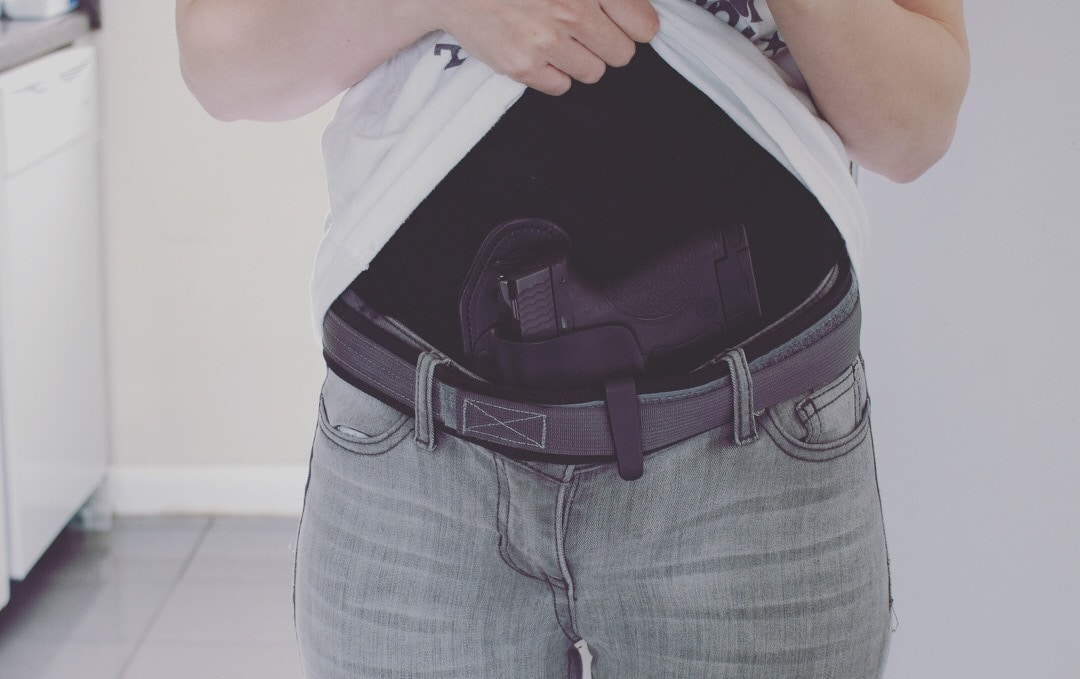 AIWB places the gun, in this case a Smith & Wesson Shield in 9mm, around the centerline of the abdomen. (Photo: Jacki Billings)

Appendix inside-the-waistband, commonly referenced as simply AIWB, has been steadily catching the eyes of gun owners committed to the concealed carry lifestyle.

This means of carry, which places the gun on the abdomen — around the 1 o’clock position — has been steadily trending upwards, gaining a stream of followers who swear by the position’s efficiency and draw stroke. It’s not without its naysayers, though. For years AIWB has been lauded as an unsafe means to carry. “You’ll shoot your junk off” are the cries of those vehemently protesting what they term as a fad among youngsters in the gun community. This fad, however, has been going strong for the past few years, according to holster makers, and shows no signs of slowing down.

Dark Star Gear was one of the OG’s — one of the first holster makers who begin crafting gear for AIWB before it was trendy to carry on the abdomen. Tom Kelley, the driving force behind Dark Star Gear, said that though AIWB has been around for years, 2012 was when he and other began noticing AIWB surfacing in more conversations.

“I’d say 2012 or so was when many of the stragglers in the online shooting community started to become more accepting of AIWB and we always seemed to wind up in those conversations,” Kelley explained to Guns.com in an email. “We have seen a much more rapid expansion into other segments of the shooting/training community though, largely because we were one of the first AIWB companies out there.”

While Dark Star Gear heavily targets the AIWB market, Hidden Hybrid Holsters sells a variety of holsters for both AIWB and IWB. Matt H. with the company told Guns.com that Hidden Hybrid is seeing more and more interest and sales of its AIWB gear. Matt credited a large portion of this uptick in interest to the help of online videos which have brought new conversations and ideas to the table.

“I think that the interest has increased from the increase of available videos and images that are out on websites and on social media networks,” Matt commented to Guns.com. “People that are new to carrying a firearm seem to be doing a lot of research looking for what is right for them. They find that there are more options than just carrying on their side.”

Accessibility and draw stroke have become the words du jour in the realm of AIWB. Followers dedicated to the style advocate it so heavily because of the gun’s convenient placement. The 1 o’clock position, according to AIWB carriers, lends to a quicker and more efficient draw stroke with less chance of accidentally sweeping body parts.

“If a body style can comfortably accommodate and conceal their appendix carry rig, a couple aspects of the carry style have drawn widely discussed interest: immediate accessibility and a convenient draw stroke,” Jake Smith of Alien Gear Holsters said. “And as modern society has adopted more convenience and accessibility in their daily lives, that search for simplicity may have bled into gun owners’ daily practices.”

In addition to draw stroke, the placement of the holster and gun at the front of the body allows gun owners to visually see the gun go into the holster — an advantage not afforded to those that carry behind-the-hip.

“Traditional IWB can be an issue and for me I can’t look down into the holster as easily as I can with AIWB,” Kelley of Dark Star Gear said. “With AIWB I can move my hips out a little, step back with the strong side leg, and look down the holster and know that there’s a straight path from muzzle to dirt.”

AIWB holsters, like their traditional IWB brethren, comes in a variety of styles and flavors to suit the needs of gun owners. While no two holsters is exactly alike, there is a key component to AIWB that sets it apart from everyday IWB rigs.

“We’ve always tried to stick to defining AIWB holsters as a holster with features beyond a straight drop IWB, those being a muzzle extension, muzzle pad, belt wedge, or belt lever/claw/wing,” elaborated. “A good, purposeful balance of these features is what I feel makes a good AIWB, so long as nothing extra is added and the ride height allows a proper grip.”

Retention as well as full trigger guard protection also assemble to produce a quality AIWB holster, one that will seat the gun properly and help prevent accidental bangs.

“At minimum, consumers must choose a holster with full trigger guard coverage. A rigid polymer blend is a common, go-to material now,” Smith with Alien Gear said. “Retention and fitment is also imperative for not only AIWB, but all carry styles.”

Despite the increased visibility of the AIWB community and the holster makers behind the curtain providing rigs to safely carry, there will always be those who view AIWB as unsafe. Guns.com asked each holster maker their opinions on whether this mode of carry was a dangerous or risky option. Each holster maker responded with a slight edge of amusement at the notion that AIWB was any more dangerous that any other means of carrying a loaded weapon.

“Any type of carry can be unsafe,” Matt of Hybrid Holsters said. “No matter the position of the pistol on the body safety, practice and training should be done to help prevent the possibility of a personal injury. There are different techniques for drawing and holstering depending on where you carry. The shooter should become familiar with them and practice them to become safely proficient with them.”

“AIWB carry is only unsafe if the carrier is unsafe. Proper training, equipment, retention and trigger guard coverage should provide the necessary means to prevent negligent discharge, no matter the carry style,” Smith added. “There are perceptions of unsafety with AIWB carry because of its placement near the groin and in the vicinity of the femoral artery. Altering the holster cant/placement, protecting the trigger guard from obstruction, maintaining trigger discipline and practicing a safe draw stroke all dissolve any argument that AIWB carry is unsafe.”

Kelley rounded out the opinions, supporting the idea that a loaded gun carried improperly is unsafe regardless of the actual position on the carrier. “Any carry method can be unsafe, AIWB is no different,” he said. “I think where most folks get mixed up in the safety talk is when they don’t really consider the carry method they suggest as safer.”

AIWB is the concealment community’s rising star and that meteoric rise to popularity doesn’t seem to be slowing down any time soon.