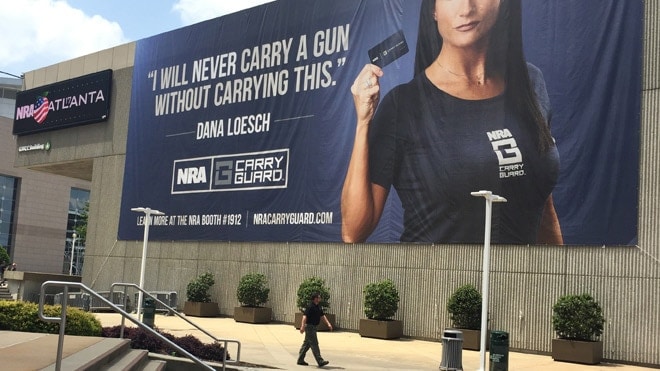 The NRA draped a sign over the side of the Georgia World Congress Center to promote the new self-defense insurance during the NRA annual conference April 27-30, 2017. (Photo: Daniel Terrill/Guns.com)

New York officials called the National Rifle Association’s lawsuit against the state government an effort to “distract” from the gun lobby’s “various violations of the law” in a motion to dismiss the case.

The motion, filed this month, describes the lawsuit as retaliation for enforcing New York insurance laws that have undercut the gun lobby from selling self-defense policies to state residents.

“[T]he NRA brings this action attempting to characterize the lawful acts of (the state)—including providing guidance to insurers and financial institutions to evaluate and manage risks that might arise from their dealings with gun promotion organizations—as unconstitutional simply because they indirectly affect the NRA,” the motion says.

The motion asks the court to dismiss allegations that such enforcement violates the NRA’s right to free speech. State regulators faulted policy underwriters rather than the NRA directly, but the action prohibited the NRA from operating the business endeavor in the state, the motion says.

The NRA has long opposed New York gun control laws and the politicians who support them, the motion says. But, despite regulatory enforcement, the organization has maintained its “ability to continue its mission, and communicate its message, in opposition to the regulation of firearms has not.”

“[T]he NRA has failed to—because it cannot—allege any particularized instances of speech that have allegedly been stifled. As such, (the NRA’s) First Amendment claims should be dismissed,” the motion says.

In response to the filing, the NRA’s legal defense, William A. Brewer III, a partner at Brewer, Attorneys & Counselors, maintains that state officials “exceeded their regulatory mandate by issuing guidance that essentially directed banks and insurance companies to cease doing business with the NRA.”

“The NRA believes this is blatant viewpoint discrimination – designed to attack the First Amendment rights of the NRA and its law-abiding members,” Brewer said in a statement to Guns.com. He added:“There is no question that DFS urged the institutions it regulates to disassociate themselves from the NRA – at the expense of the NRA and many New York insurance consumers.”

The NRA filed the case in May after the state’s Department of Financial Services announced an agreement with insurance broker Lockton Affinity and underwriter Chubb Ltd. Both companies agreed to pay millions in fines and to no longer service the NRA’s Carry Guard and similar policies in the state.

The gun lobby said the enforcement effort was politically motivated and claimed state officials conspired with gun control group Everytown for Gun Safety to hurt its pro-gun message. The state launched an investigation into Carry Guard in October after advocacy groups launched a campaign targeting the policy and characterizing it as “murder insurance.”

Alongside the case against New York, the NRA named Lockton in a breach of contract lawsuit for failing to protect the organization by violating New York law.