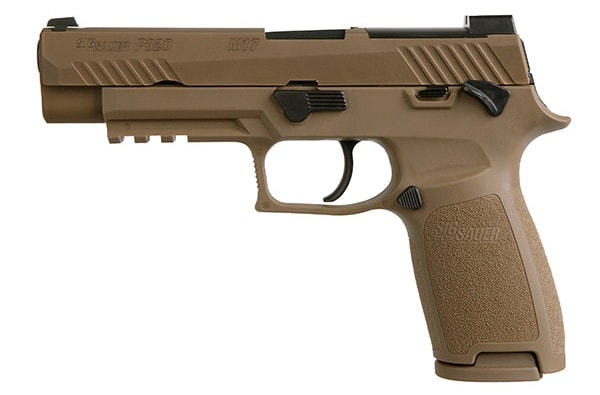 The P320-M17 is dressed up in coyote tan and ready for the consumer market. (Photo: Sig Sauer)

The M17 is headed to the civilian market as Sig Sauer announced the new commercial version of the U.S. Army’s M17 service pistol — the P320-M17.

The P320-M17 closely models the Army’s M17, offering a 9mm, striker-fired design with two 17-round magazines. Coated in coyote-tan, the PVD coated stainless steel slide features the same optic cut as the MHS contract in addition to all black controls. Featuring a SIGLITE front night sight with a removable Night Sight rear plate, P320-M17 is available in three sizes with a manual safety. The pistol measure 8-inches in overall length with a 4.7-inch barrel and weight of 29.6-ounces.

The pistol’s modularity made it both a success in the Modular Handgun System selection process and will be its strength in the consumer market, according to Sig Sauer. 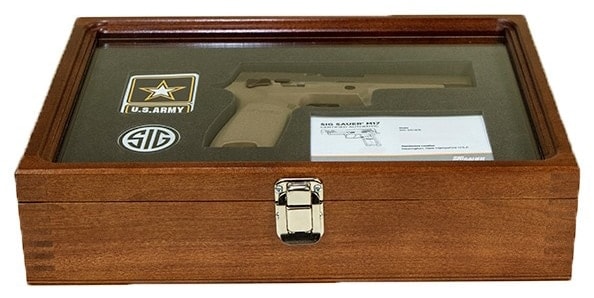 Sig Sauer offers a special case for those that wish to misplay the P320-M17. (Photo: Sig Sauer)

“It was truly an honor for Sig Sauer to be chosen as the U.S. Army’s choice with the M17. When the selection was announced, civilian interest in the pistol was immediate,” Tom Taylor, Chief Marketing Officer and Executive Vice President of Sig Sauer, commented in a news release. “We are proud to bring this P320-M17 to the marketplace to meet the substantial civilian interest, and the high demand, to own the pistol the Army uses as well as the other branches of the U.S. Military.”

Sig Sauer was awarded the MHS contract in early 2017, beating out Beretta, Glock and Smith & Wesson with the M17 design.

The P320-M17 will begin shipping to dealers in August 2018 with a price tag of $768. A special M17 collector’s case will also be available for purchase to display the pistol. The case features a cherry box with dark mahogany stain, tempered glass top and U.S. Army logo.