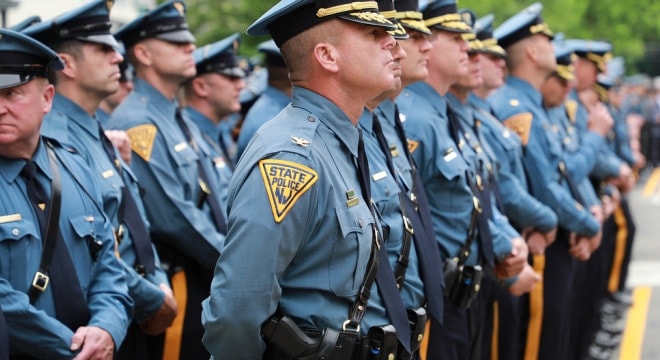 The bill clarifies existing law on when an officer can possess and carry a “large capacity magazine” capable of holding more than 10 rounds. (Photo: New Jersey State Police)

The state Senate on Thursday approved a rushed proposal to add a carve-out to New Jersey’s ban on “high-capacity” magazines for off-duty law enforcement.

The measure, S2846, was sponsored by the chamber’s top two Democrats, Senate Majority Leader Loretta Weinberg and Senate President Steve Sweeney, sailing to a 29-0 approval just two days after it was introduced. The bill allows off-duty officers in the state to have a detachable magazine loaded with as many as 17-rounds of ammunition in their possession for an issued-weapon, going beyond the current 10-round limit signed into law by Gov. Phil Murphy last month as part of a sweeping gun control package.

“This restriction ensures that the officer is not limited by civilian restrictions, but we also are being responsible by not giving carte blanche to an unlimited number of sanctioned large-capacity magazines,” said Weinberg in a statement.

The measure, whose Assembly companion, A4304, is still pending, fixes what lawmakers contended was an omission to the new statute that reduces the legal maximum capacity of detachable magazines in the state from 15 to 10 rounds. Those not exempted who currently own such mags are only able to keep them if they have a registered firearm and the magazine is permanently blocked to comply with the law. The state’s National Rifle Association affiliate is currently challenging that limit in court, arguing the state is taking property without compensation, a violation of the Fifth Amendment.

A similar magazine cap in California outlawed even formerly grandfathered magazines capable of holding more than 10 rounds in 2017 except for a carve-out for active and retired law enforcement, a move that generated a lawsuit from West Coast gun rights groups triggering an injunction that has kept it from taking effect. The U.S. 9th Circuit Court of Appeals earlier this month upheld that injunction. Meanwhile, California Gov. Jerry Brown recently signed an expansion of the magazine carve-out to include some former reserve officers as well.