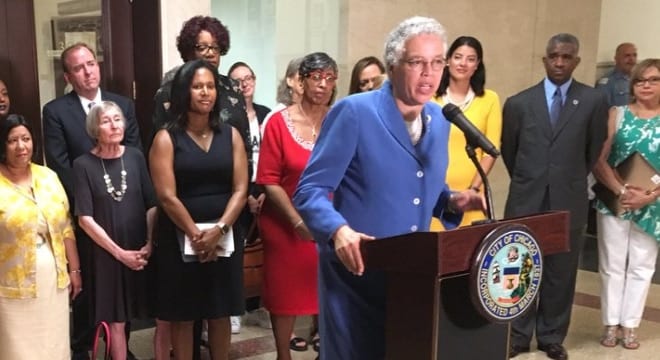 A legal challenge to gun restrictions in the second-most populous county in the nation was beaten back in a federal court last week.

Two area gun owners, Troy Edhlund and Matthew Wilson, filed suit against Cook County, Illinois officials over the vagueness and constitutionality of the county’s local ban on some semi-auto firearms and magazines.

In a short seven-page memo handed down last Friday, the court sided with Cook County, saying the local government’s 2005 ordinance on assault weapons falls “outside the scope” of the Second Amendment protections on an individual right to keep and bear arms.

Judge Manish S. Shah, a 2014 appointment to the federal bench by President Obama, held there was fundamentally no difference between the contested Cook County regulations and one adopted in 2013 by the Chicago suburb of Highland Park, the latter of which was upheld by the U.S. 7th Circuit with further challenge subsequently turned away by the Supreme Court.

Edhlund and Wilson argued through their attorneys that the Cook County ban used fuzzy, ambiguous definitions that could be broadly applied to outlaw almost any semi-auto. For instance, one of the men owned an M1 Garand — a rifle with an eight-round internal magazine — as well as several rifles such as a French MAS 49/56, Egyptian Hakim and Romak 3 which used detachable magazines capable of holding less than the legal limit in the county, but since the law defined an assault rifle as one with “the capacity to accept” a larger magazine, the guns in question may be illegal if viewed through such a theoretical lens.

Similar arguments were made against regulations on a “protruding grip” and “barrel shroud” under the law, holding that such innocuous guns as the Winchester 1905 had a forend that mostly encompasses the barrel while the subject of a grip is open to interpretation.

County officials were energized by the court ruling, with Cook County Board President Toni Preckwinkle saying on Tuesday, “Our ordinance is the kind of common sense gun legislation we need. It is a responsible and meaningful law aimed at protecting our residents and our law enforcement officers.”

As for the plaintiffs, their attorneys have already filed an appeal with the 7th Circuit.