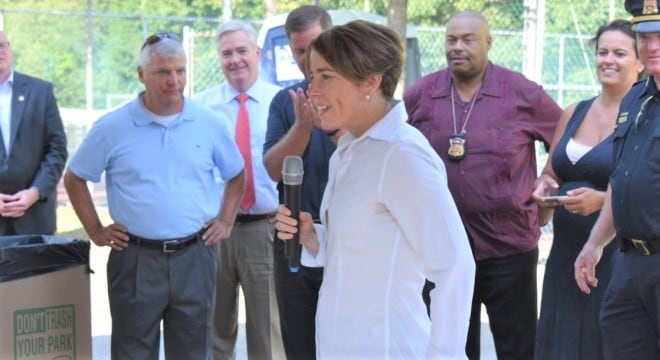 Massachusetts Attorney General Maura Healey, now facing reelection in November, has spent most of her first term in legal combat with pro-gun advocates and picked up another lawsuit this week. (Photo: Healey’s office/Twitter)

A pair of gun retailers are taking state Attorney General Maura Healey to court over her shifting interpretation of the Commonwealth’s regulations on semi-auto firearms.

Baystate Firearms, of Peabody, and Cape Gun Works, of Hyannis, filed their challenge in a Suffolk County court on Wednesday to Healey’s 2016 enforcement action. The shops argue that instead of enforcing the state’s “assault weapon” ban as written, Healey issued an “entirely new interpretation” of the law that deemed some constitutionally protected firearms once considered “Massachusetts compliant” as illegal.

Just over a year after taking office, Healey announced she was ratcheting up enforcement of the state’s assault weapon ban by targeting “copycat” guns whose actions were similar or interchangeable to AR-15s and AK-47s but otherwise met legal requirements by being sold without features such as a flash suppressor, bayonet lug or telescoping stock. She contended as many as 10,000 such rifles were sold in the Commonwealth in 2015.

The lawsuit filed this week argues that the state lawmakers who crafted the current law only allowed a “features test” similar to the now-expired federal assault weapon ban, not a similarity test, which was only added by Healey without legislation or public input.

Although not named as a plaintiff, the lawsuit is supported by the National Shooting Sports Foundation, who has argued the new interpretation by Healey compromised the retailers’ livelihoods without increasing public safety. Larry Keane, the organization’s senior vice president and general counsel, said that Healey and her staff “clearly overreached their statutory authority and decided to legislate from that office without the benefit of any public process and in total disregard of 18 years of Massachusetts firearm law, under which firearm retailers operated.”

The case is not the first legal challenge to be mounted against Healey’s enforcement action. Early last year a group of state residents wanting to buy such firearms and two licensed gun dealers interested in continuing to sell them allied with the National Rifle Association to take Healey to federal court on the matter, arguing their gun rights were being violated.

Yet, Judge William Young this April stood by the Attorney General, saying that “Assault weapons and LCMs [large capacity magazines] — the types banned by the Act — are not within the scope of the personal right to ‘bear Arms’ under the Second Amendment,” going on to elaborate that magazines capable of holding more than 10 rounds of ammunition were likewise “indicative of military firearms” and thus out of Constitutional protection. The ruling has been appealed to the U.S. 1st Circuit.