Amazon and Reddit are the latest to join in the fight against 3D printed gun files, banning the computer codes in various forms from their respective platforms early last week.

Reddit kicked off its ban around Aug. 19, updating its user agreement to effectively ban 3D gun files from being sold or gifted on the site.

The policy change raised flags in the sub-reddit “NOWTTYG: No One Wants To Take Your Guns,” a section of the site dedicated to indexing news stories regarding bans and confiscations of firearms and firearm related content. Reaction was swift.

“Oooh, ‘memba (sic) a couple months ago when they were spamming their users with messages about fighting back against the evil corporations that wanted to censor, restrict, and/or block portions of the free exchange of info. over the internet?” Redditor SnarkyUsernamed posted.

“I just think it’s important that every one know Reddit doesn’t want gun related content on its site as (sic) is more than happy to restrict the free exchange of ideas it finds problematic,” Gunsmyth replied.

A few days after the Reddit change, online retailer Amazon jumped on the anti-3D bandwagon pulling The Liberator Code Book: An Exercise in Freedom of Speech from its self-publishing book storefront. Within the confines of the 584-page printed book were computer codes for the Liberator — a plastic pistol — that could be copied and fed to a 3-D printer.

On July 31, a federal judge blocked the company behind the Liberator’s code, Defense Distributed, from publishing the files through a temporary restraining order. The Liberator Code Book went live on Amazon’s self-publishing platform on Aug. 1. 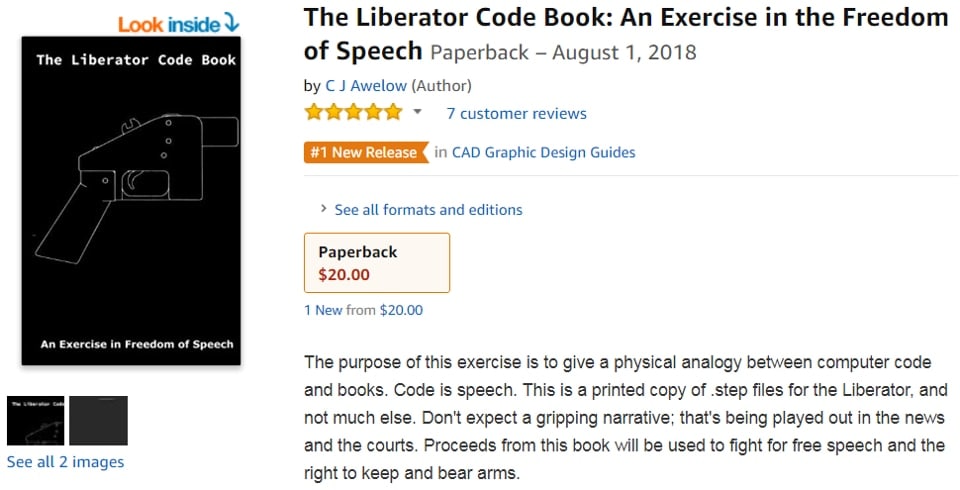 A screenshot of The Liberator Code Book prior to its removal Aug. 22. (Photo: Screengrab via Forbes)

The book is not the workings of Defense Distributed founder and Liberator creator Cody Wilson, but rather author CJ Aewelow, a supporter of Free Speech and the Second Amendment, who used the open source files to create the book. Aewelow’s description on Amazon said proceeds from the sale of the book would be donated to fight for both the First and Second Amendment.

“Code is speech,” The Washington Post reported, “Proceeds will be used to fight for free speech and the right to bear arms.”

The book was removed from Amazon just a few days after it launched, disappearing without a trace on Aug. 22. An Amazon spokesman told The Washington Free Beacon that the move was due to a violation of content guidelines.

According to Kindle Direct Publishing content guidelines, the retailer can ban the publication of pornography, offensive content, illegal and infringing content, public domain and other non-exclusive content as well as books causing a “poor customer experience.”

The Washington Free Beacon said its source within Amazon would not elaborate on exactly which guideline the book violated.

“This book was removed for violating our content guidelines,” Jack Evans, an Amazon spokeman, told the publication. “Don’t have any additional comment beyond what I’ve shared.”

Interestingly, Amazon still allows the sale of controversial titles and instruction manuals such as The Anarchist’s Cookbook, The U.S. Army Improvised Munitions Handbook and the U.S. Department of the Army Field Manual on Boobytraps.

No word yet on whether the book will migrate to another retail platform.

The move by both Reddit and Amazon to eradicate 3D printed gun files is the latest in a series of attempts by retailers aimed at preventing the gun codes from being shared openly on the internet and to consumers.