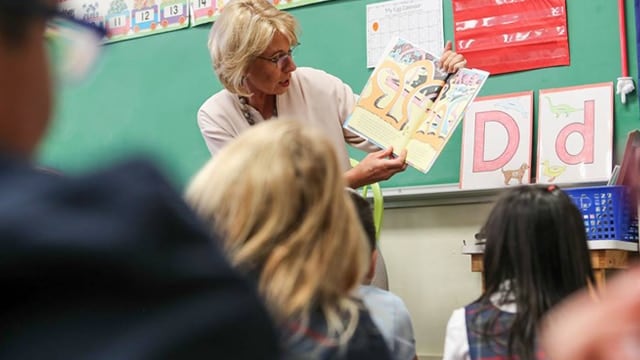 Secretary of Education Betsy DeVos denied that her department had planned to use federal grant money set aside for struggling schools to buy guns. “Let me be clear: I have no intention of taking any action concerning the purchase of firearms or firearms training for school staff,” DeVos told House Democrats in a letter.

However, in the letter, she continued to say that per an Obama-era policy that state and local educational agencies have the authority to “tailor” their investments for their own needs. “I will not take any action that would expand or restrict the responsibilities and flexibilities granted to State and local educational agencies by Congress,” she said.

In closing, DeVos added that lawmakers should contact her “directly to discuss policy matters, instead of relying on faulty reporting.”

Details about the effort surfaced in an article by The New York Times that explained the Education Department had been reviewing a federal program for loopholes to fund arming teachers. While the federal funding bill, the Every Student Succeeds Act, prohibits using grant money for arming teachers, an act within it, the Student Support and Academic Enrichment program, does not.

In an initial response to the article, an Education Department spokeswoman suggested the department would keep options open. “The department is constantly considering and evaluating policy issues, particularly issues related to school safety,” she said.

Last month, more than 160 House Democrats penned the letter asking DeVos for clarity on her plans, but they also warned about federal law dictating how the funds should be used. Whether or not DeVos’s letter satisfied Democratic lawmakers is unclear, but what is clear is that gun control advocates want more of an answer.

Everytown for Gun Safety announced in a press release the filing of a Freedom of Information Act request to the Department of Education. The FOIA request specifically asks for internal documents discussing an effort to arm teacher as well as any written communication between the department and the National Rifle Association.

The idea to arm teachers is supported by the Trump Administration, which appointed DeVos to head a School Safety Committee following deadly school shootings in Florida and Texas. DeVos has also previously expressed support for arming teachers. Despite support by the powers that be, a majority of educators and the public criticize the policy.