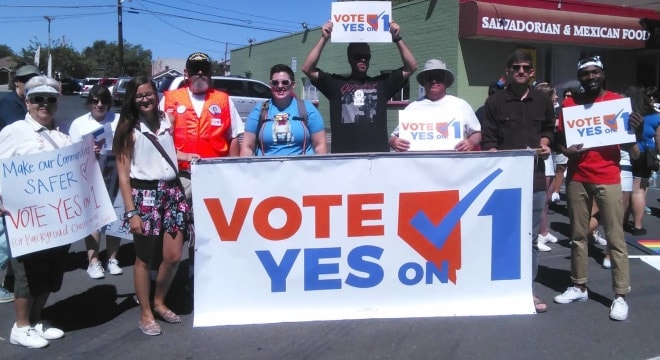 Although funded in a $20 million campaign, Question 1 was only narrowly approved by voters and has been in a holding pattern since 2016 after the state attorney general deemed it unenforceable. (Photo: Nevadans for Background Checks)

A Bloomberg-backed group is moving forward with an appeal of a lawsuit to enact a dormant gun control measure narrowly approved by Nevadans in 2016.

The three, filing as individuals, kicked off a legal challenge last year against Gov. Brian Sandoval and Nevada Attorney General Adam Laxalt to move forward with implementing the approved initiative, which Laxalt had labeled unenforceable.

“This case centers of the failure of the executive branch of the State of Nevada to enforce legislation enacted via ballot initiative by a majority of Nevada voters,” says the statement of appeal to the Nevada Supreme Court filed by the advocates Wednesday.

“Due to Governor Sandoval’s failure to take required actions and a flawed and incomplete opinion from the Attorney General, the Background Check Act has not been enforced and remains in limbo, contravening the will of the people of Nevada who exercised their constitutional right to change the law to promote public safety and protect the communities of this state.”

Laxalt moved to halt the measure after receiving feedback from the Federal Bureau of Investigation, explaining the state’s private party background checks are in the purview of Nevada’s own resources as one of the 13 “point of contact” states that conduct their own checks through a central repository. With the federal government declining to process the expanded checks directly, and the Nevada Department of Public Safety neither authorized nor funded by the ballot measure’s language to run the checks, Laxalt contended the law was junk.

Running for governor to replace the term-limited Sandoval, Laxalt gave an apparent nod to the unenforced ballot measure on his campaign website, saying, “I am a proud and firm supporter of the Second Amendment, and I take particular pride in the work my office has done, during my time as Nevada’s Attorney General, to stand up for the right of citizens to bear arms.”

“Almost two years after Nevada voted to expand background checks to unlicensed gun sales, that deadly loophole remains wide open,” said John Feinblatt, Everytown’s president. “Now Nevadans are looking for leaders who understand that respecting the will of the people is not optional.”

Polling data has Sisolak with a healthy lead over Laxalt with six weeks to go before voters head to the polls. Two years ago, Question 1 failed in 16 of the state’s 17 counties with only Nevadans in Clark County approving the measure, in the end passing by around 10,000 votes.