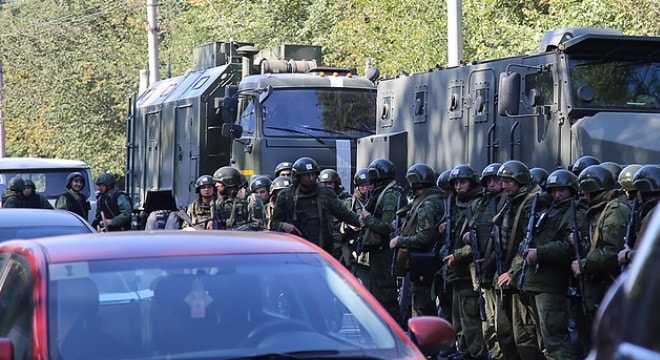 A high-profile shooting at a college in the Crimean city of Kerch last week may result in Russia’s already strict gun laws ratcheting tighter.

Viktor Bondarev, the head of the Federation Council’s Committee on Defence and Security — the chief oversight committee for military and police matters in the upper house of the Russian parliament — is ready to strengthen regulations on guns and ammunition in the country, state media outlet TASS  reported.

“In order to prevent such terrible incidents in the future it is necessary to tighten control of trade in firearms and cartridges for them,” said Bondarev, the former head of the Russian Air Force.

The attack at the Kerch Polytechnic College on Oct. 17 has been blamed on an 18-year-old student, Vladislav Roslyakov, who legally bought a pump-action shotgun and 150 shells in the weeks prior to the event. State-controlled media say that he used the shotgun and homemade nail bombs to kill 20 and wound at least 70 before taking his own life.

Russia is widely regarded as having restrictive gun laws, with no right for gun ownership recognized under the law. Since the fall of the Tsar in 1917, increasingly strict regulations have eliminated legal private handgun ownership and sharply curbed rifle possession. All legal firearms are registered and gun owners have to pass extensive background checks and in many areas are required to secure their firearms at gun clubs. However, Western gun policy groups estimate there are upwards of 11 million illegal guns in circulation in the county.

Bondarev is reportedly exploring a special legal act to better regulate the transfer, marketing and production of guns in the country as well as to monitor the Internet for information about illegal gun trafficking.

At the same time, Vesti News, wholly funded by the Russian government, this week editorialized that stepped up gun control was essential. Vesti’s Dmitry Kiselev, described in the West as “Putin’s favorite TV host,” specifically argued that an 18-year-old who had never served in the military shouldn’t have been able to buy the shotgun he used in the attack.

“Never has something like the Kerch tragedy happened in Russia before,” said the host. “We all remember Beslan, but it was a terrorist attack. This story is totally different. One may reflect on the peculiarities of the killer’s personality and the environment he was brought up in but I believe that one thing is clear. We must tighten the regulations for private sale of firearms.”