Vigilante: That time the Army tried to make a 37mm Gatling gun (PHOTOS)

What’s not to like about a 37mm Gatling gun that could fire at 3,000 rounds-per-minute (Photos: Springfield Armory National Historic Site)

While today we think of the 20mm Vulcan and 30mm Avenger as the go-to in brrrrt technology, back in the 1950s the Army planned for something even bigger.

With jets replacing prop-driven airplanes in combat after WWII, the Army was in need of replacing their legacy anti-aircraft guns such as the M45 Maxson quad-50, which was designed to swat Japanese Zeros and German Messerschmitts from the sky. The new Atomic Age military required something more modern. The answer came from Springfield.

Starting in 1956, the Army’s Springfield Armory in Massachusetts in conjunction with Watervliet Arsenal in New York began a feasibility study of a multi-barrelled 37mm Gatling type weapon for use as a vehicle-mounted gun. Under a team led by Dr. Alexander Hammer — yes, a gun designed by a guy named Dr. Hammer — the largest *modern Gatling gun developed soon went from the drawing board to the developmental stage. (*Hotchkiss made 47mm and 53mm revolving cannons for naval use in the early 1900s but they were hand-cranked ) 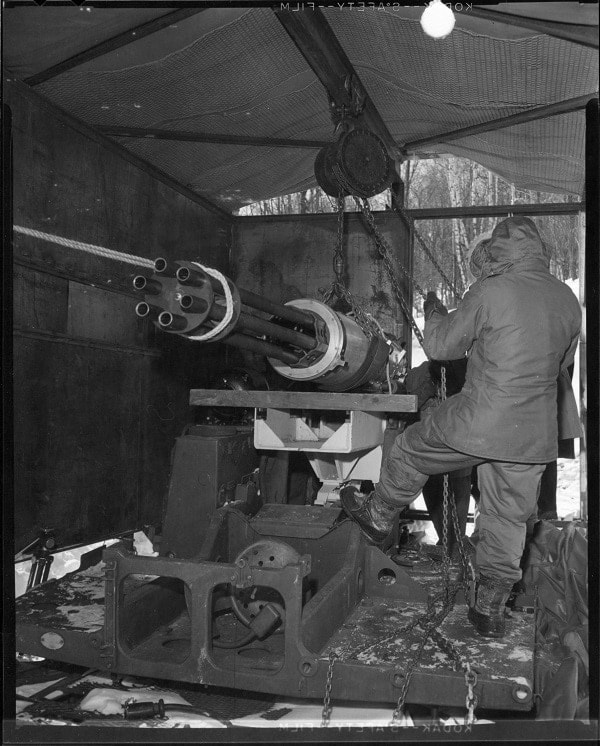 Basically a scaled-up version of the 20mm Vulcan, the new 37mm monster used a half-dozen barrels that all went just past 8-feet in length. The electrically-driven gun was designated the T250 Vigilante in development. The gun’s fodder was the 37x219mmSR round, which was based on a shortened and necked-down 40mm Bofors case. Its planned rate of fire? Some 3,000 chili-dog-sized shells per minute in 48-round bursts with an eye towards anti-aircraft use, although this could be dialed down to be used against ground targets. Could you imagine 37mm shells raking an enemy pillbox in the latter? 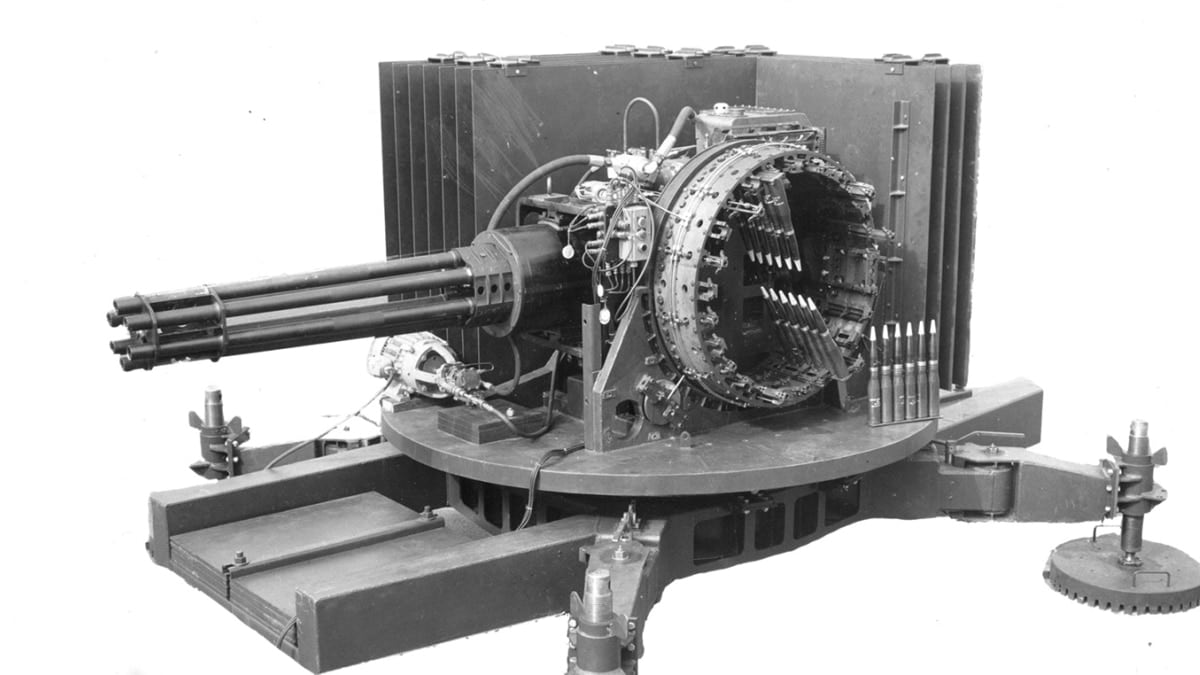 Note the 192-round pan magazine on the left side of the gun, with blocs of 37mm shells. Keep in mind each of those barrels is over 8-feet long. The gun could empty its magazine before you could say, “Look at the size of that giant Gatling gun over there!”

With Vickers making a hydraulic gun drive, a prototype was ready for testing in late 1958 although the Vigilante’s loading mechanism proved to be slower than expected. Improvements were made, including dropping the weight for each of the gun’s six barrels from 73 pounds to 63 pounds each. That, coupled with other modifications such as redesigning the bolt assembly to be able to survive the punishment delivered to the mechanism when fired, drove the rate of fire closer to the intended 3K rpm mark. 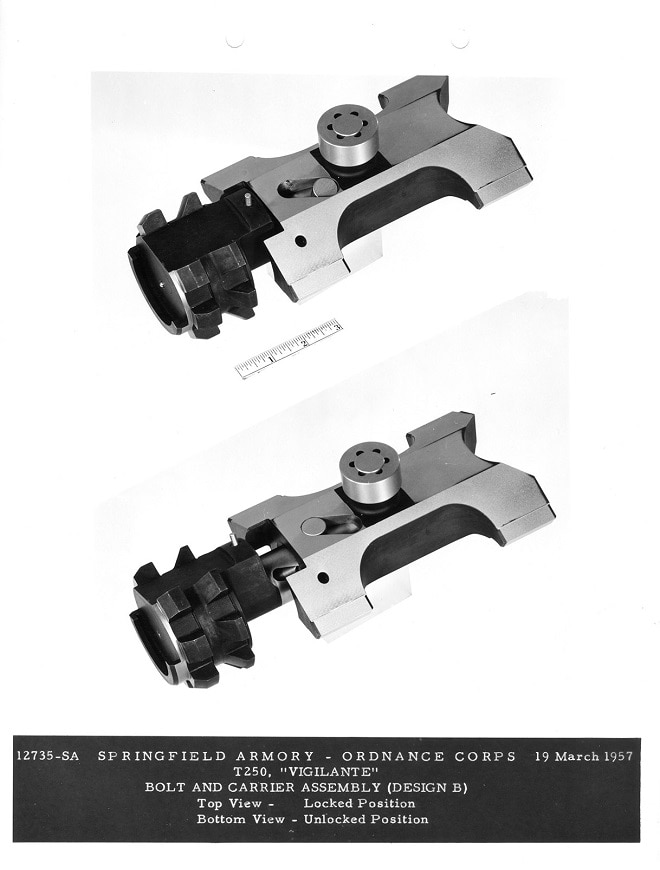 Examples of the 37mm gun’s bolts, locked and unlocked. Note the size compared to the 3-inch ruler

Also, according to Alex MacKenzie with the Springfield Armory National Historic Site, “it fired out of battery a couple times in testing, which absolutely wrecked the guns.”

By 1960, mock-ups of the T250 on an armored vehicle chassis — the T249 — were created, incorporating an integrated pulse-doppler radar fire control system mounted to help track incoming aircraft and slew the big 37mms to the target. On the downside, the vehicle had just 192 rounds in its ready magazine, which allowed for only four bursts at the maximum rate of fire before it had to be reloaded by hand. 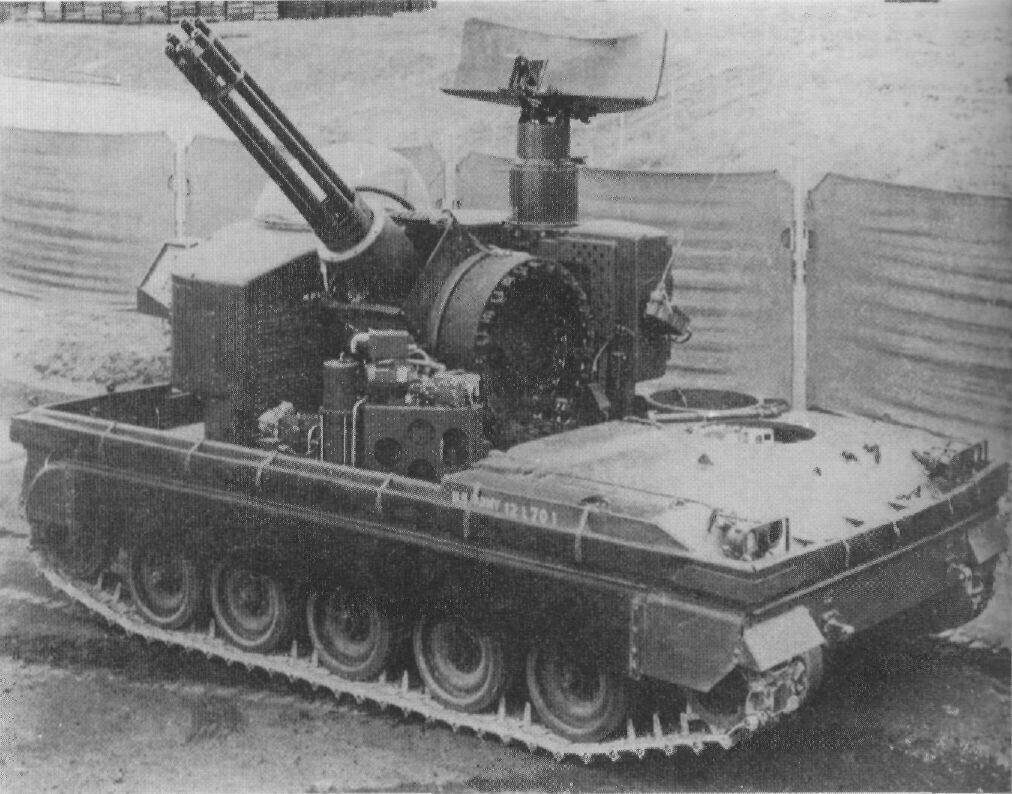 The T249, the planned wheels for the T250 cannon. The radar was to help track incoming aircraft. The gun could also be fired at ground targets at rates of as low as 120-rounds-per-minute.

However, it was not to be and the Army went with the combined Vulcan Air Defense System (VADS), a smaller 20mm Vulcan-based answer to air defense that had more flexibility. That, coupled with Hawk, Redeye, and Chapparal surface-to-air missile systems, proved to be the military’s primary anti-air package through the 1960s and 70s until they were in turn replaced by the Patriot, Stinger, and the Avenger systems.

During Vietnam, when the Air Force was using old C-47 transports as mini-gun-filled “Spooky” gunships and were looking to upgrade to larger C-130 models, thought was put into a big side-firing gunship cannon. Meetings held at Wright-Patterson Air Force base in 1968 and 1969 considered the never-produced 37mm T250 Gatling at first but then ruled it out in favor of other designs. Today, AC-130s carry a mixture of 20mm and 30mm guns as well as 40mm Bofors and 105mm howitzers.

Sperry-Rand also later envisioned the Vigilante for their entry to the Army’s ill-fated Division Air Defense (DIVAD) gun system competition in the 1970s, chambered in 35x228mm Oerlikon. It was not successful.

A few elements of the Vigilante survive today. Springfield Armory National Historic Site has the first of six T250s built, gun X1, still in their collection where it has been since 1960 after they got it back from Picatinny Arsenal. They also have a plastic mock-up as well.

If you want to see the only T249 vehicle, which mounts the big 37mm Gatling, it is in the U.S. Army Artillery Museum, at Ft. Sill, Oklahoma on macro display.

Special thanks to Alex MacKenzie, curator, and the staff at Springfield Armory National Historic Site for their help with this article. The museum boasts the world’s largest U.S. military small arms collection.