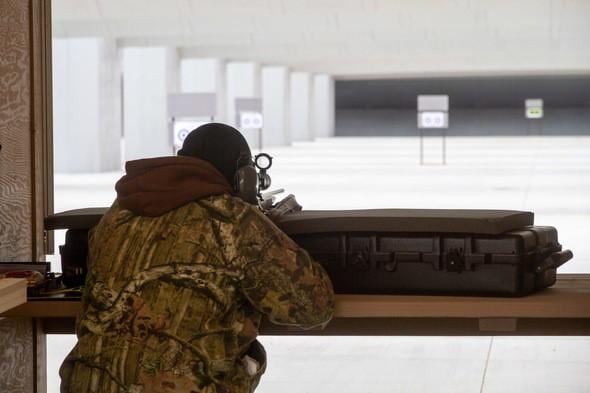 The August A. Busch Shooting Range has seen over 44,000 visitors in the first year in operation. (Photo: MDC)

A Missouri Department of Conservation shooting range opened outside of St. Louis has been very busy. The new August A. Busch Shooting Range in Defiance hosted 44,419 shooters during its first year of operation since it opened last October, MDC announced this month.

“All and all, it was a good first year,” said Busch Range Outdoor Education Center Manager Bryant Hertel, who noted a surge of first-time users in the weeks leading up to this November’s deer season.

About two out of three shooters used the rifle/pistol ranges while visitor surveys found that rifle use was most popular, followed closely by handguns. Additionally, the site hosted about 2,200 people during educational events.

Open five days a week, the range features 100-yard and 50-yard firearm ranges for benchrest or standing position shooters, two shotgun patterning ranges and five trap/skeet ranges. Costing $3 per booth per hour or per clay round, use of the range is free for hunting education, youth, and conservation-related programs.

The reason the costs are so low is that, like all states and territories, Missouri benefits from the Wildlife Restoration Act of 1937. Commonly referred to as Pittman–Robertson after the two lawmakers pivotal to its passage, it uses an excise tax levied on all firearms and ammunition sold or imported into the county to perform conservation-related tasks as varied as restoring elk habitat to funding safety programs, and establishing public shooting ranges.

Paid for by manufacturers and producers, the fund has been pushed into overdrive in recent years because of a spike in gun and ammunition sales.

Missouri was apportioned $28 million in Pittman-Robertson funds this year alone. Legislation, backed by firearm industry groups, is currently in Congress that would make it easier for conservation agencies to use such funds to establish more ranges.