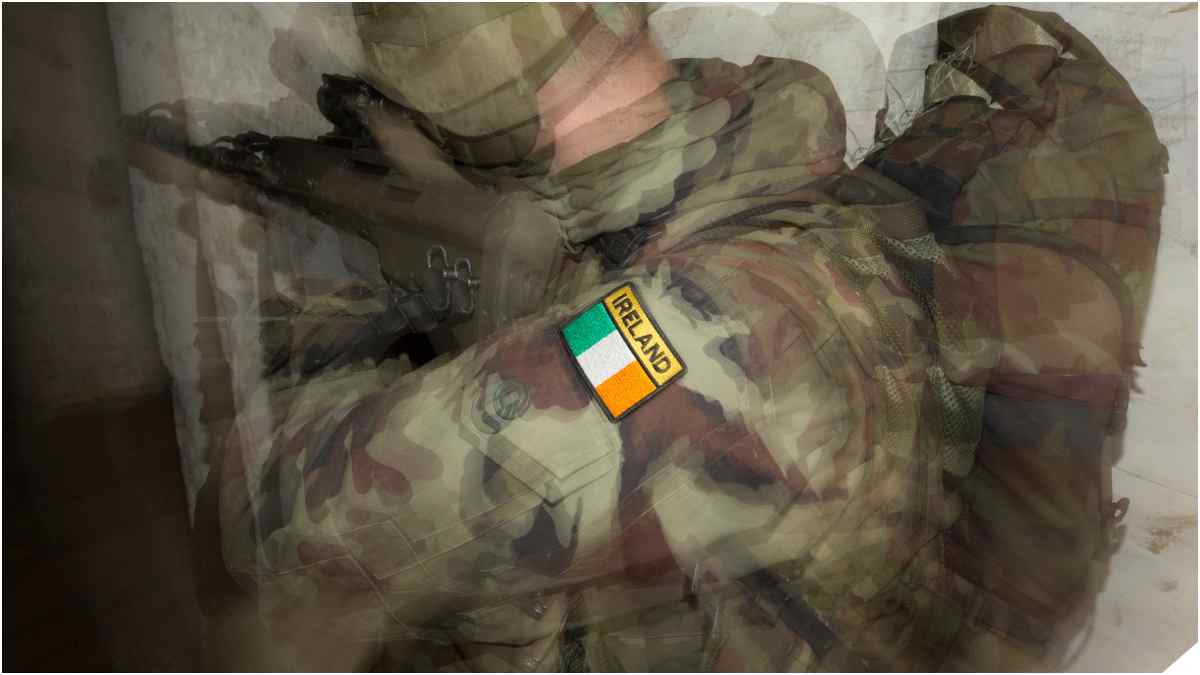 Enough with the green beer, leprechaun jokes, and Armalite memes, here is the hardware of the modern Irish Army. An outgrowth of the “Old” IRA that fought in the Irish War of Independence, the current Army of the Republic of Ireland traces its origins to 1922 when the country broke with London.

The original arms of the force, supplied in an agreement with the British to the Irish Free State, included Commonwealth-standard Lee-Enfield .303 rifles, Lewis light machine guns, and an assortment of pieces left over from the IRA days to include Thompson submachine guns. 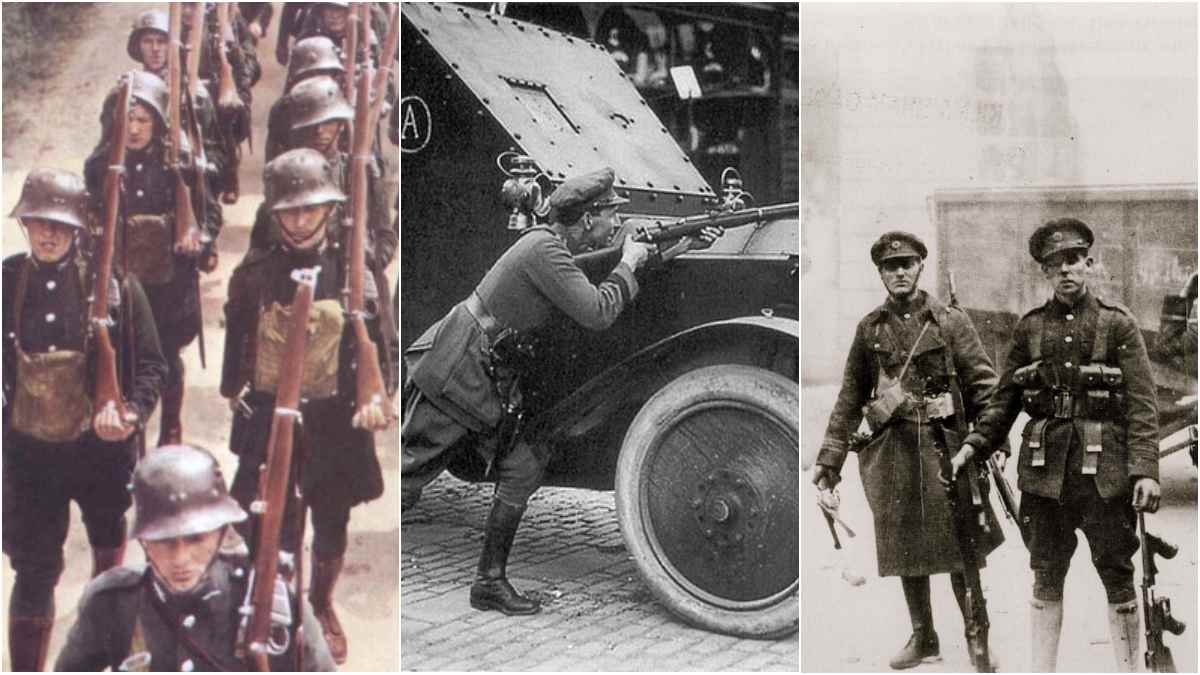 From 1922 through WWII, the Irish Army carried Enfield .303s, Webley revolvers, and the occasional Tommy gun as well as Lewis and Vickers machine guns. Their steel helmets, looking very German, were actually made by Vickers.

They later picked up some P.14 sniper rifle variants made by BSA, one of which recently came up at auction.

The below 1933 film shows the Irish Army, looking very out of place with their German-style helmets, tooling around in Rolls-Royce Armoured Cars and generally mucking about with their Enfields, Vickers heavy machine guns, and other odds and ends.

This WWII-period film, from the Irish archives, shows 1940s additions such as the BREN light machine gun and Boys .55-cal anti-tank rifle in addition to the older hardware.

After a period of armed neutrality during World War II, the Irish modernized by ditching their aging gear for a new generation of small arms which included the FN FAL as their primary rifle, Browning Hi-Power pistols, and Swedish “K” m/45 9mm submachine guns. 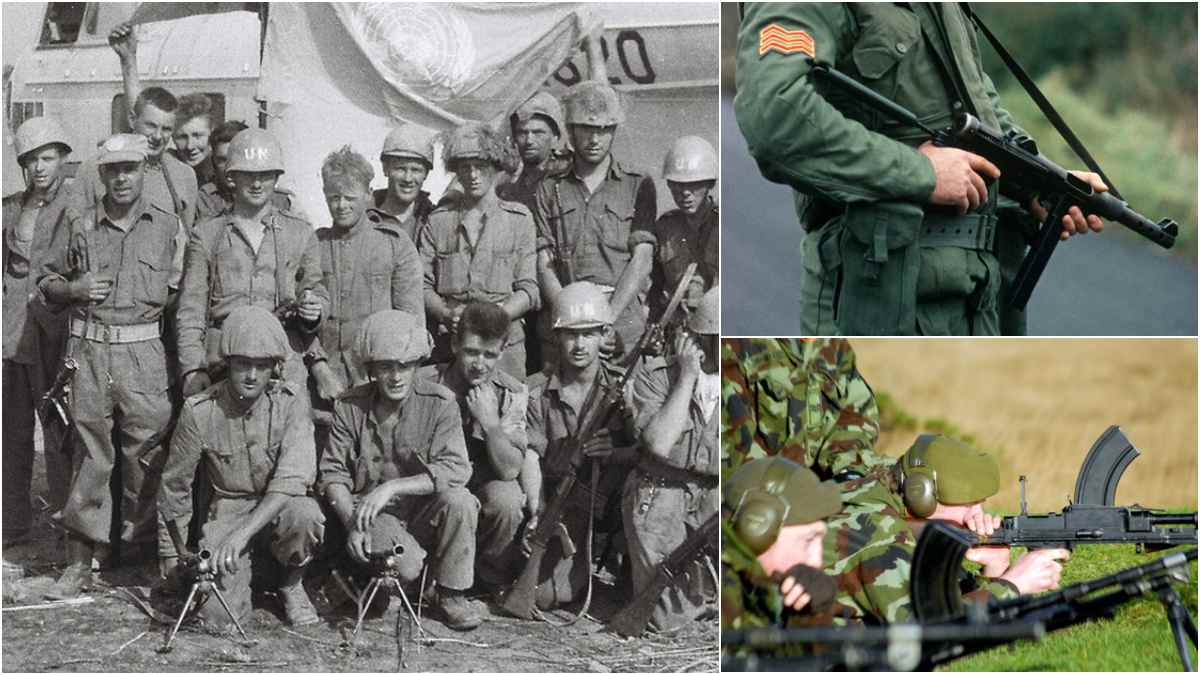 Many of the old guns became very popular on the surplus market. For instance, Interarms imported some 800 former Irish military Lewis guns into the U.S. in 1959, and many of the vaunted “Belgian Rattlesnakes” still in circulation in the states today come from that shipment.

This new hardware saw extensive service in the 1960s, 70s, and 80s as the Irish deployed on dozens of UN peacekeeping missions including the famous mission to the Congo that resulted in the Siege of Jadotville. That battle, in which an isolated company of Irishmen held off a much larger force of Congolese troops and allied mercenaries until their ammo was exhausted, was the subject of a recent Netflix movie of the same name.

The film got the weapons right at least, giving much camera time to the Irish FALs, Enfield snipers, K-guns and Vickers HMGs.

Today, the Irish Army consists of two brigades and the Army Ranger Wing, the small country’s special operations force. In the past couple of decades, they have undergone another generational change in small arms. This has included ditching most of their FALs and K-guns for Austrian-made Steyr AUG Mod 14 bullpup 5.56mm rifles in 1988, phasing out their legacy machine guns with the FN MAG 58, and tapping in the HK USP for the aging Browning Hi-Power. 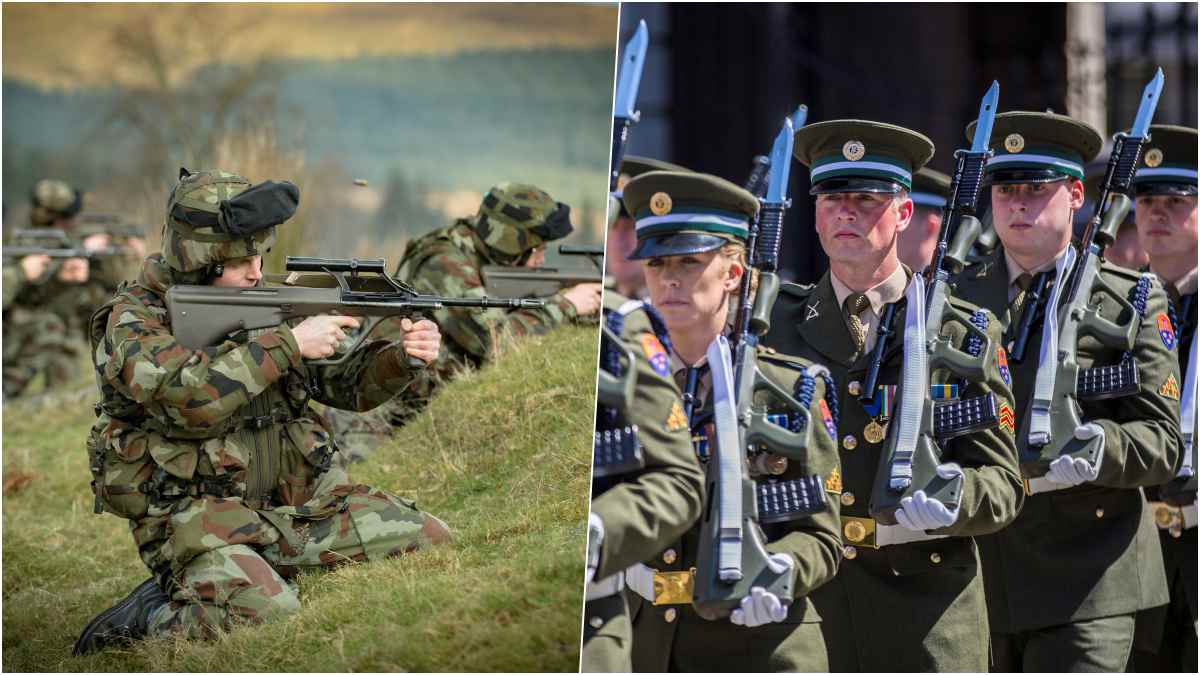 The go-to modern shillelagh of the Irish military since 1988 has been the Steyr AUG. The military is in the process of an upgrade program to add Picatinny rails and a Trijicon ACOG to the guns in place of the older optics. (Photo: Irish Army) 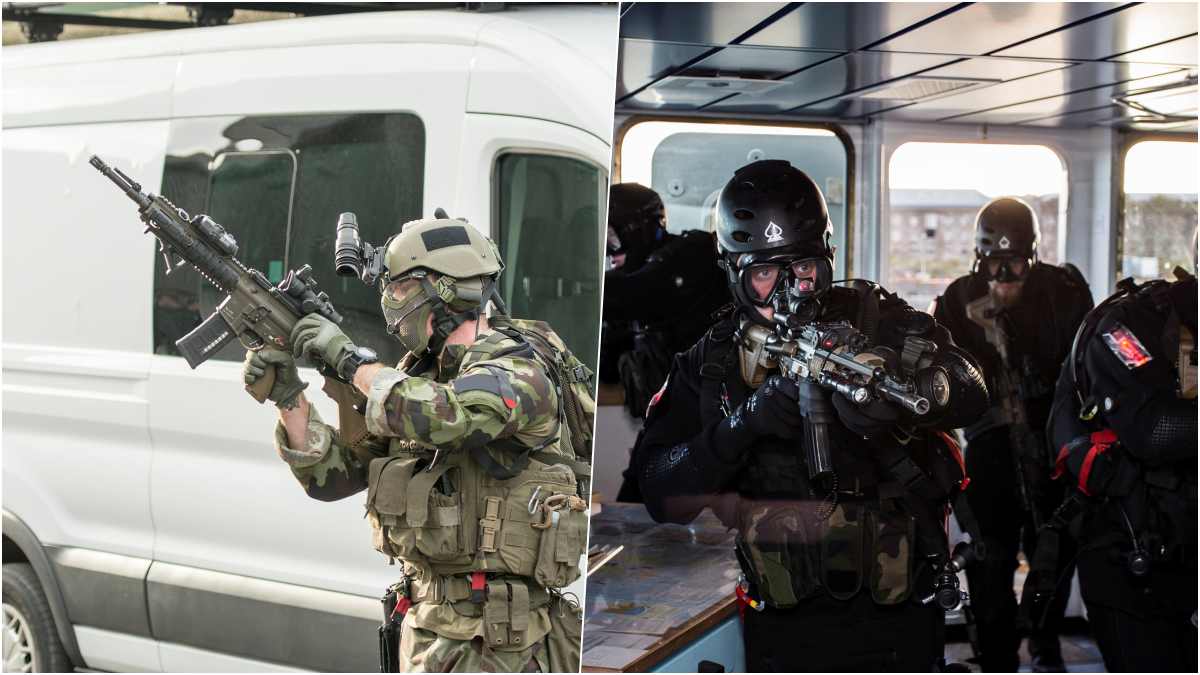 The Irish Ranger Wing sports HK 416 and 417s with all the aftermarket extras (Photo: Irish Army) 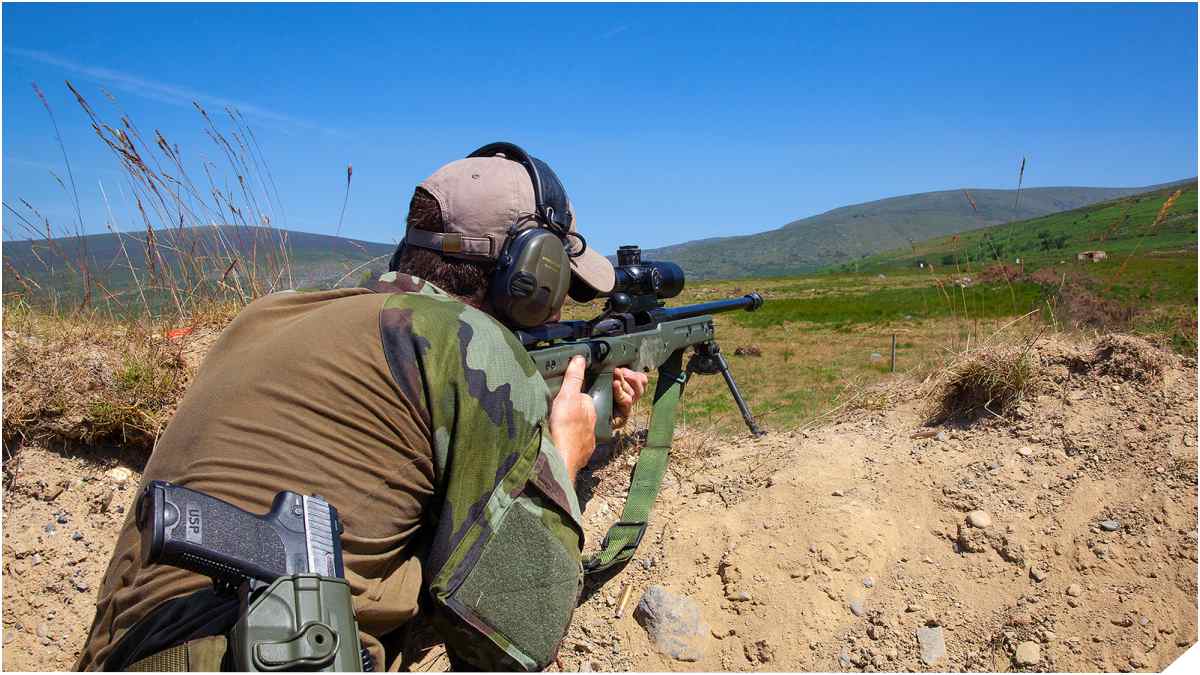 And finally, the FAL is still around in small numbers, doing its part. Since 2011, the vaunted 7.62x51mm battle rifle known internationally as “The Right Arm of the Free World” has been upgraded with a Schmidt & Bender optic, bipod and adjustable stock for use as a DMR rifle. 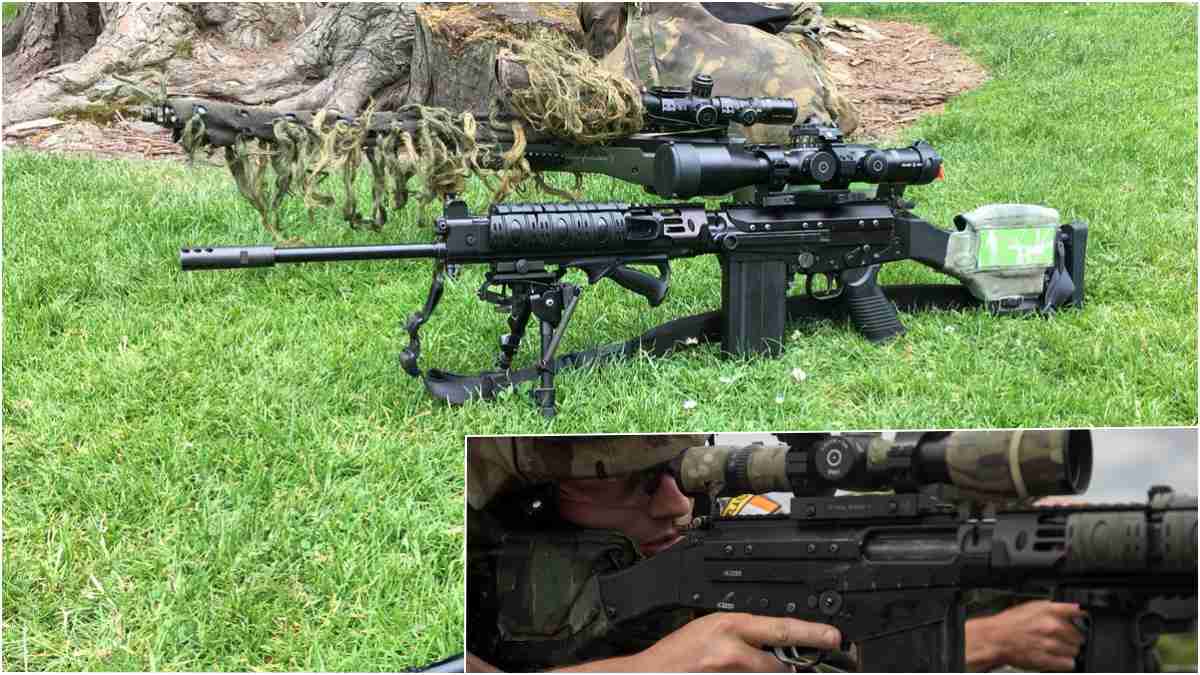 And any force that still appreciates the FAL has to be ok. Hell, somebody has to keep the snakes out of Ireland.