From the Guns.com Warehouse: A Pile of Colt Gold Cups (PHOTOS) 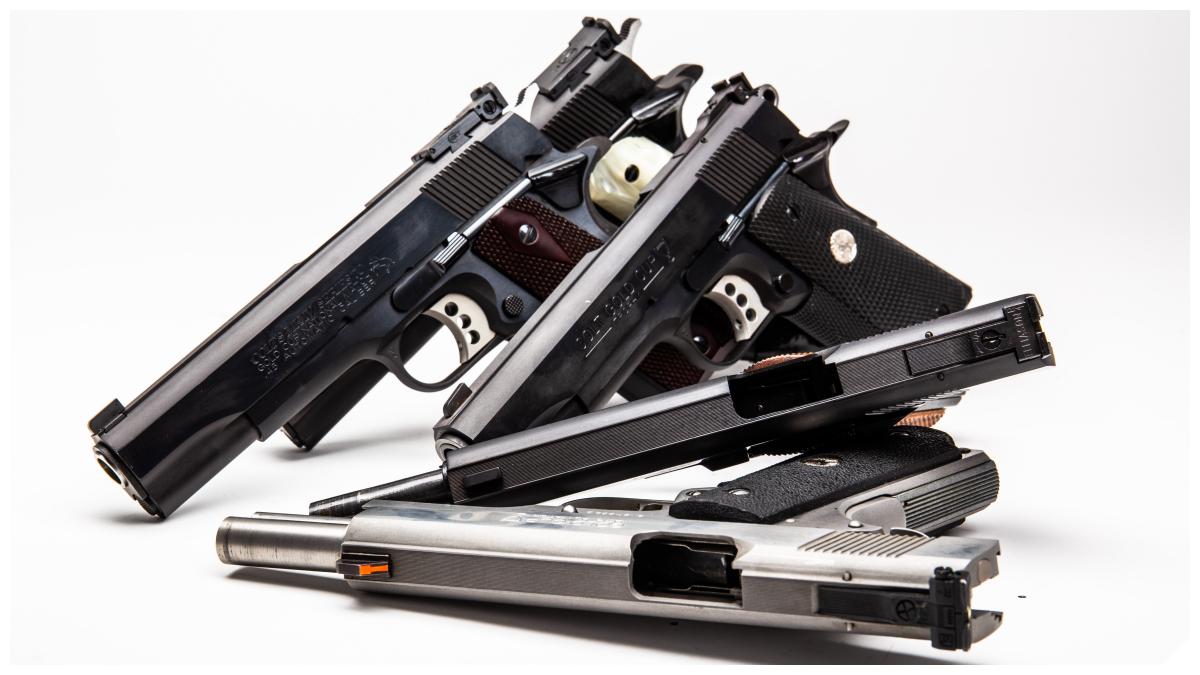 What’s not to like about a Colt Gold Cup? (Photos: Richard Taylor/Guns.com)

An absolute classic offshoot of the standard M1911, the Colt Gold Cup series are iconic match pistols, and we have several up for grabs from the Guns.com warehouse.

John Moses Browning’s celebrated 1911 design was adopted by the U.S. military just in time for World War I and soon after Colt began to respond to feedback to tweak the gun for further use. In January 1932, Colt responded to the common fine tuning done to service pistols by military marksmen at the National Match competitions in Camp Perry by introducing the National Match series of accurized 1911s that offered upgrades such as hand-fitted internals, match barrels, checked triggers and mainspring housings and adjustable sights. This model proved popular until it was suspended in 1942 due to the pressing needs of World War II.

In 1957, Colt rebooted the concept as the “Gold Cup National Match” line and has retained the terminology ever since. Fundamentally, these guns have been the benchmark for right-out-of-the-box competition pistols for more than a half-decade with Colt long describing them as “the finest shooting semi-automatic in the world.” With that being said, many have also turned to the reliable all-steel longslide for personal protection and in the good old days when the wheel gun was king for law enforcement, it was not uncommon for members of LE shooting teams to carry their otherwise competition NM 1911s for everyday use.

Originally introduced with the square-bladed Colt Accro adjustable rear sight — which was later changed out as the series progressed, the guns featured slanted serrations on the slide as well as a grooved 7/16-inch flat rib in the 12-o’clock position, the latter feature giving the gun a distinctive “flat-top” appearance. Other improvements include a flat mainspring housing, larger ejection port and several minor internal differences from the standard GI 1911.

Our current selection of Gold Cups that is up for grabs from our extensive gun library covers a wide range of the gun’s production history, covering about a 30-year range. 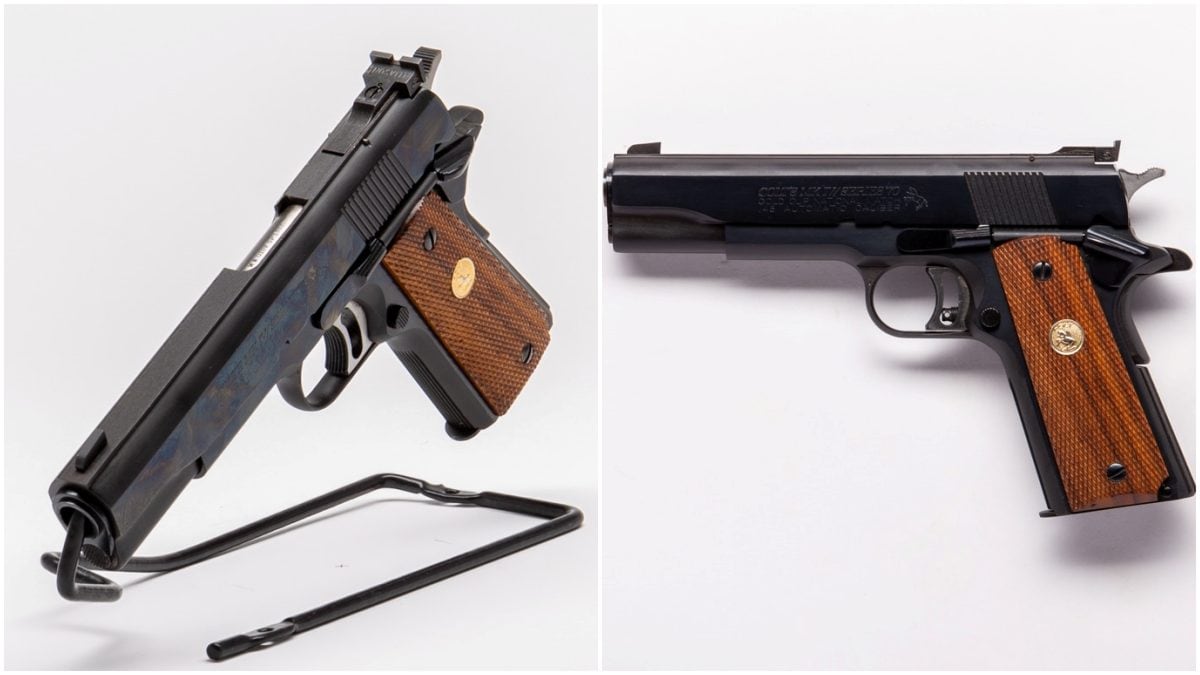 This MK IV Series 70 Colt Gold Cup National Match from 1983 and includes factory Elliason rear sights, an adjustable trigger, and a beautiful finish for its age. It comes with its original box and paperwork. Colt stopped producing this model in 1983. 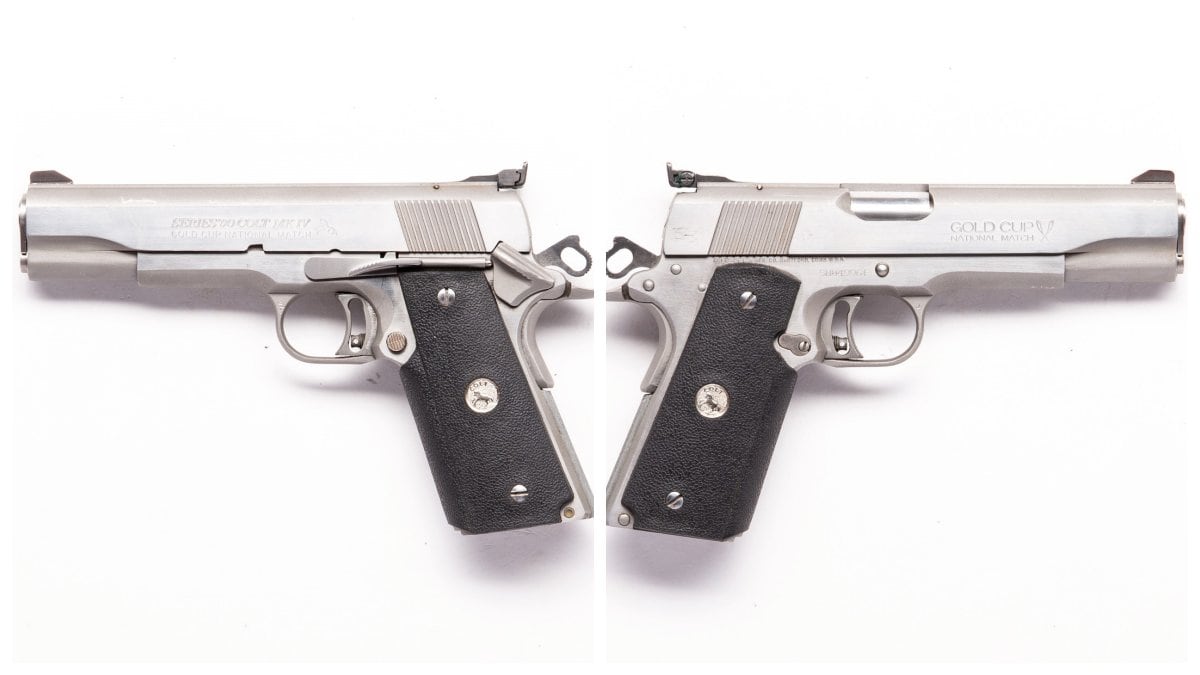 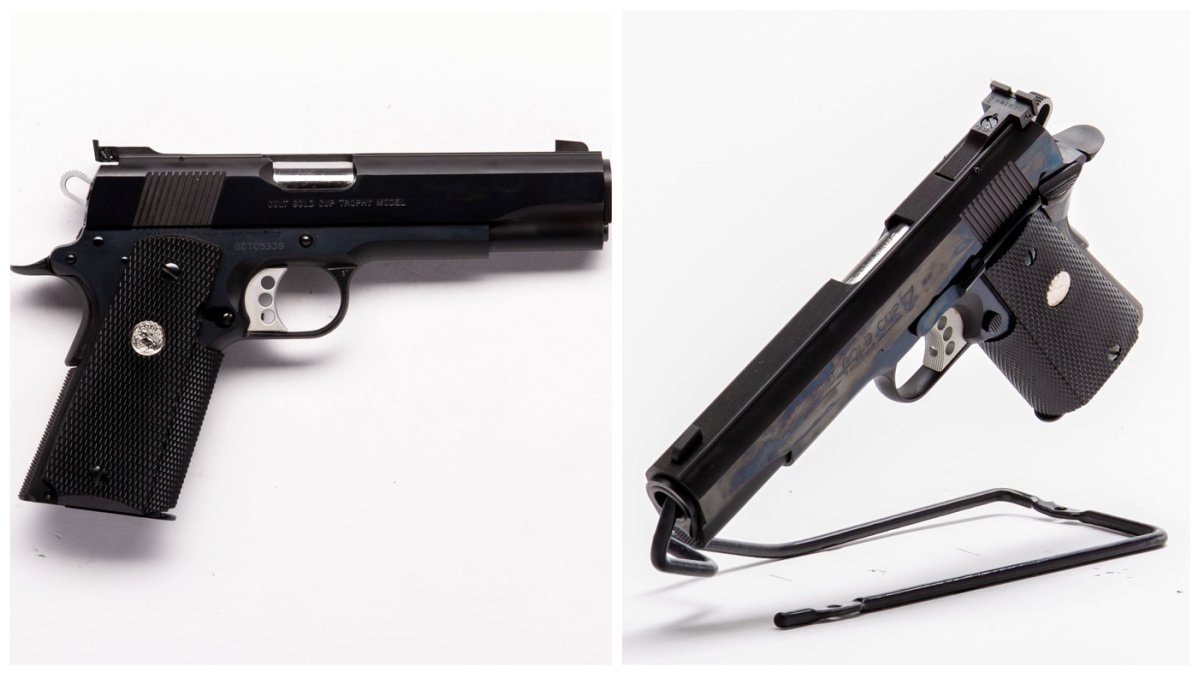 This Colt Gold Cup Trophy is a 1999-vintage gun. The Trophy series started in 1997 and this example includes Elliason rear sights and a wraparound grip. Of note, this beautiful Colt is currently just $999. 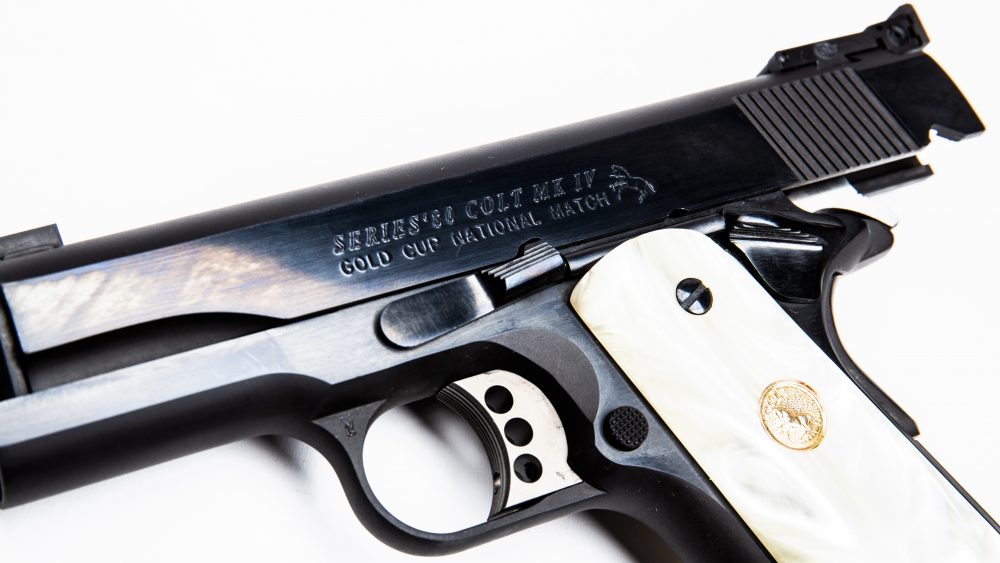 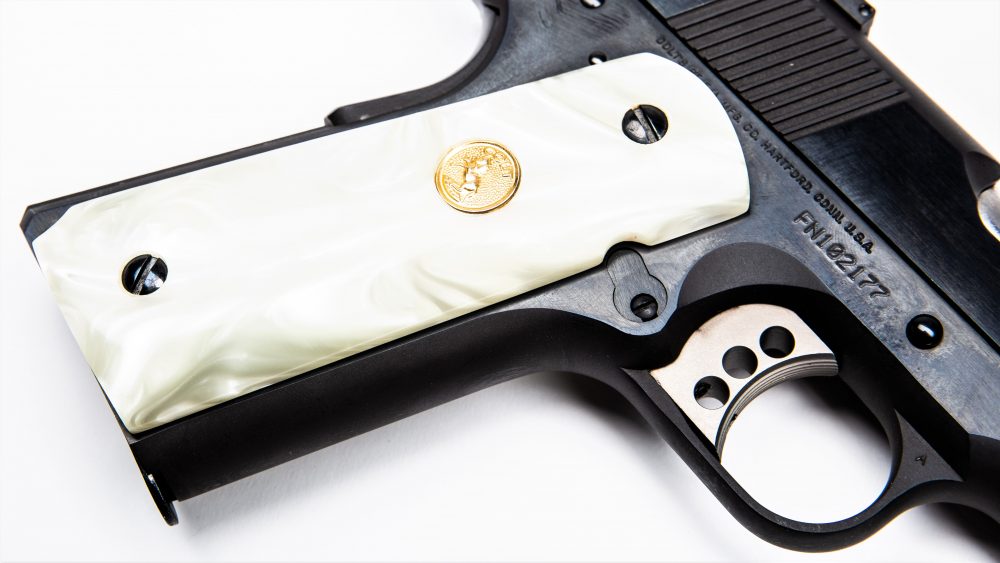 This certified gun still has the original Colt rubber grips as well as an extra mainspring in its original factory case. 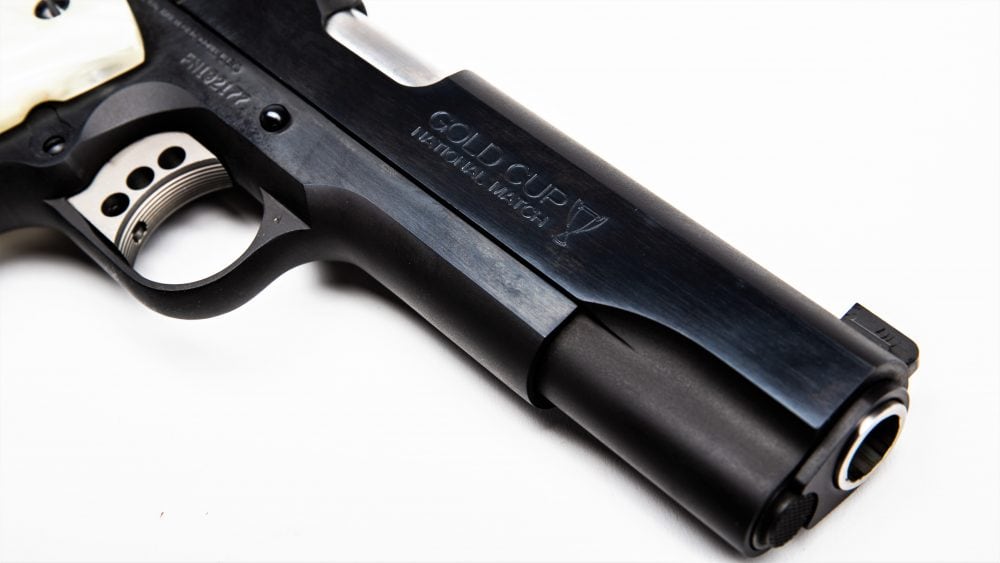 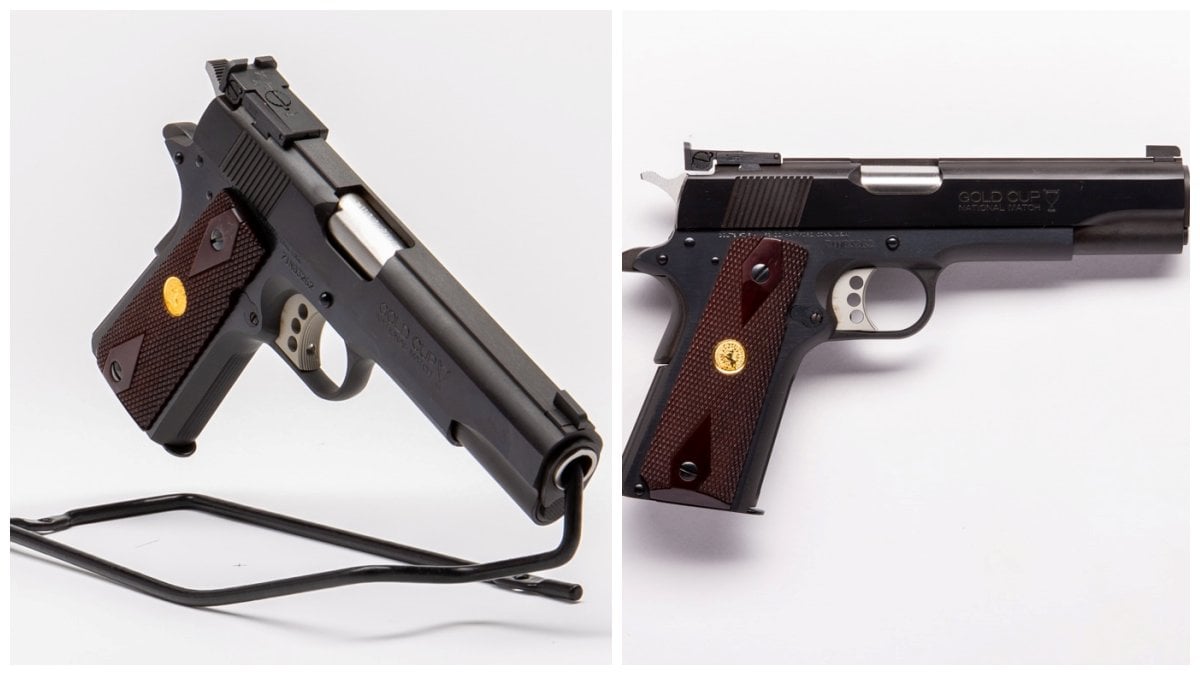 This Gold Cup National Match, of recent manufacture, is one of Colt’s Series 70 O5870A1 style flat tops, a more retro styling that Colt has been going with in recent years.

For home defense, competition use or sheer collectability, it is hard to beat a vintage Colt Gold Cup 1911. 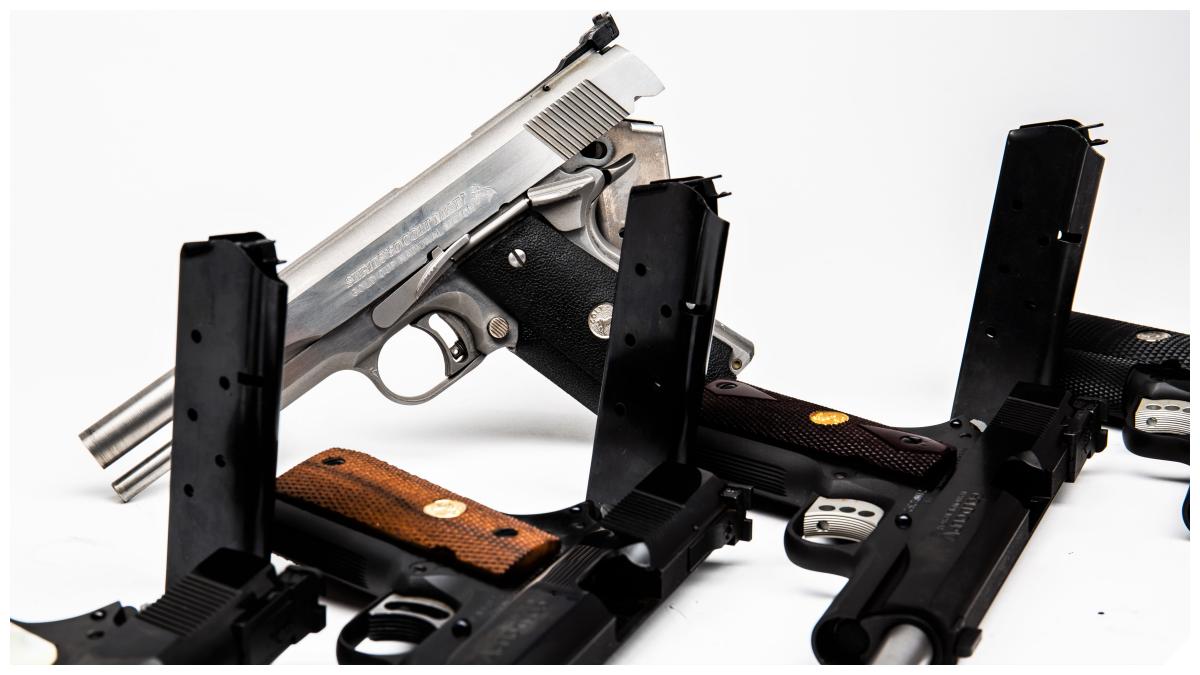 We always have several Gold Cups on hand, with our current selection ranging across nearly a four-decade span of the type’s construction.

However, for those who would like to go with something new and take it from there, Colt still makes the Gold Cup line in both 70 and 80 series and Guns.com can help you out with one of those bad boys as well. Check out the video of the new stainless 70 Series Gold Cup Trophy we caught up a while back.