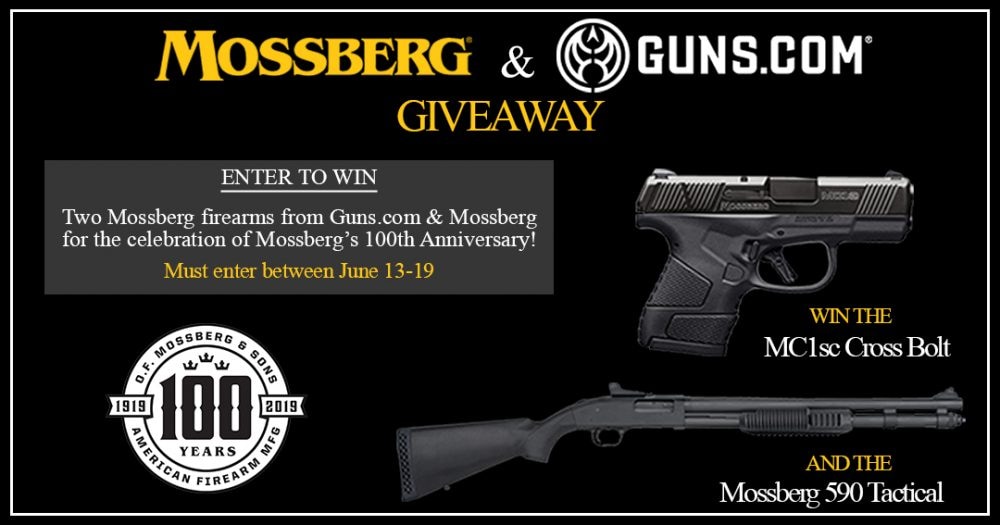 The winner of the Guns.com Mossberg giveaway will receive both an MC1 Crossbolt pistol and 590 Tri-Rail shotgun.

Mossberg and Guns.com have teamed up to give away not one but two firearms in honor of the iconic American company’s 100th Anniversary.

The lucky winner will not only get a new Mossberg MC1sc 9mm subcompact pistol but will also be the new owner of a Mossberg 590 Tri-Rail 9-Shot pump-action shotgun as well.

The MC1sc, the company’s first 21st Century pistol design, boasts a six-round flush-fit and seven-round extended magazine while a 3.4-inch barrel gives it a 6.25-inch overall length. As such, it follows in the footsteps of the gunmaker’s first offering.

“In 1919, Oscar Frederick Mossberg and his two sons, Harold and Iver, began with a simple dream to manufacture durable and reliable firearms that the working class could afford,” said Linda Powell, Mossberg’s director of media relations. “And a lot has happened in Mossberg’s first 100 years: starting with the company’s first gun, the Brownie, a four-shot, 22 caliber pistol; a generation of bolt-action rifles and shotguns, including the venerable 500 pump-action; and credit for over 100 design and utility patents.

“Yet through it all, the company has proudly remained family-owned and operated. And this year, the fourth generation of Mossbergs are excited to launch the MC1sc, the culmination of a century of innovation, passion, and dedication,”Powell said.

The heavy-walled 590 9-Shot Tri-Rail is a serious 12 gauge meant for serious use. Equipped with a Ghost Ring sight and a 20-inch barrel with a 3-inch chamber, the shotgun stems from Mossberg’s lengthy experience with duty and military pumps.

“With decades of military and law enforcement duty under its belt, it’s no surprise that the Mossberg 590 Tactical shotgun is the ideal choice for personal or home defense,” said Powell. “And it’s the original pump-action shotgun that passed the U.S. Military MIL-SPEC 3443 testing requirements almost 40 years ago.”

Sign up to win all this week for a chance to win this amazing Mossberg package here. The contest runs June 13-19, closing on the last day at 11:59 pm. See the contest page for full terms and conditions.