A Plinker for Beginners: The Walther P22 (VIDEO)

Nearly a decade ago, I strolled into the gun range nearest my house, tested a few pistols and walked out with my first handgun. A Walther P22. In the year’s since, however, my taste in handguns has evolved. For carry, I swapped it out for the 9mm Glock 19, but I saw a Walther P22 available inside the Guns.com warehouse and it piqued my interest. So, I thought it was time to take a trip down memory lane, revisit the beginning of my gun journey, and see if my fond memories of the P22 hold up to reality.

Measuring 6.3-inches in overall length, the Walther P22 features a 3.42-inch barrel length with a 4.5-inch height making it a compact semi-auto model. The hammer equipped P22, is a double-action/single action pistol with a hearty 10-round capacity. Weighing in at 17-ounces, the P22 is light enough that it doesn’t weigh arms down while shooting but also solid enough to take a beating at the range.

The P22 sports a manual safety, custom accessory rail for added accessories like lights and lasers, slide serrations for easier gripping and slide manipulation as well as removable backstraps to better customize the grip area. The grip itself features a unique texture designed to prevent hands from slipping when sweaty or wet. The texture itself isn’t overly aggressive, though, so those with sensitive palms should have no issues firing the P22 over the long-term. The P22 also employs a chamber viewport that allows shooters to quickly identify the status of the firearm – whether it is in fact loaded or unloaded. 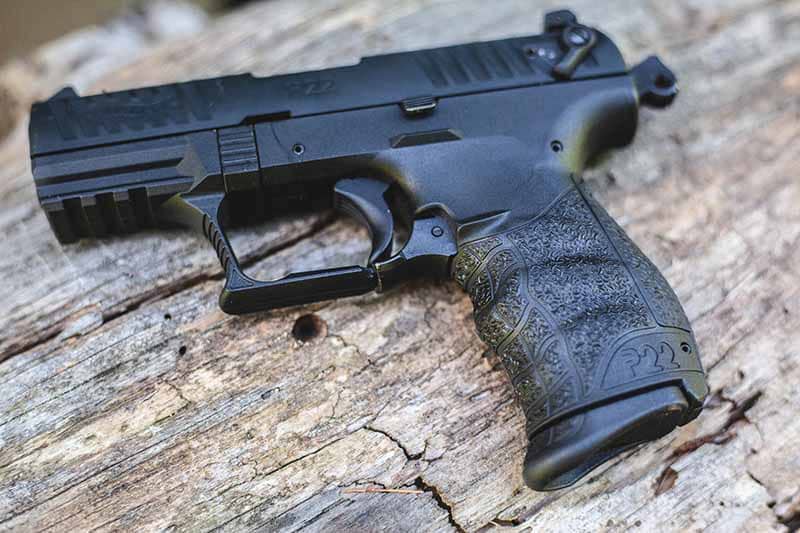 As I look back, the Walther P22 was exactly what I needed early on. The compact .22 was easy to use, comfortable to shoot and had little to no recoil. And, picking it up again, the pistol performed largely as I remembered. With practically no recoil, I could plink for endless hours. Then, with .22 LR ammo to boot, I could reasonably do that without breaking the bank.

The P22’s controls are laid out in a manner that make it easy to operate. However, something I noted about its construction now gave me pause. Back when I first picked up the Walther P22, its magazine release nestled into the trigger guard didn’t seem or feel odd. After several years of carrying a Glock, though, this lever-style release is cumbersome and had me tripping up during reloads at the range. It’s not what I would term a deal breaker — certainly not for new gun owners who don’t know anything different — but having been around guns for a more than minute, it felt odd.

The P22 also sports a manual safety, another feature that feels foreign as a Glock owner. The safety is a lever style and quickly moves between functions with a flick of the button. 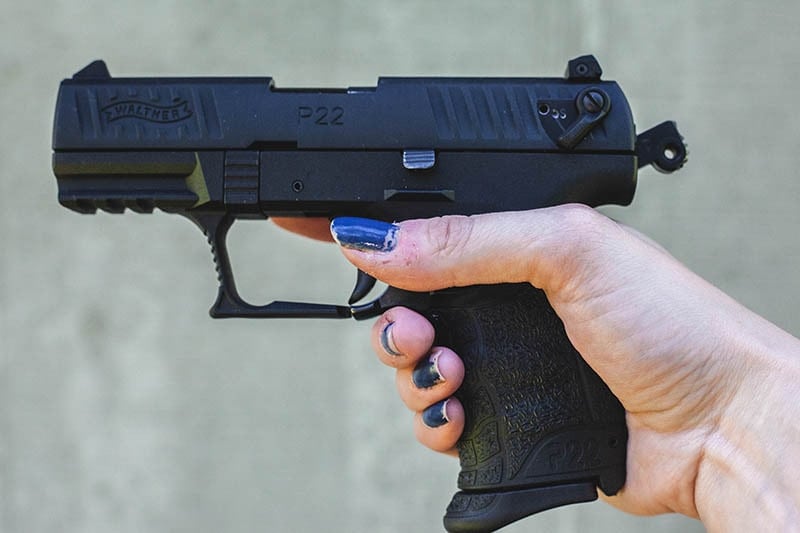 The P22 rests comfortably in hand with all controls accessible. (Photo: Jacki Billings/Guns.com)

Controls aside, the Walther is a fun little gun to shoot — when it does actually shoot. The pistol sometimes has small temper tantrums depending on the quality of ammo. In my experience, both years ago and even today, CCI .22LR seems to work about the best. Once the ammo equation has been solved, the Walther plugs away at targets providing the opportunity to plink, have fun or train without the usual rigors of larger caliber guns.

The Walther P22 proves to be a decent plinker for those just entering into the gun world or those that want to train on the cheap. The Walther P22 was a nice trip into my gun owning past and a pleasant reminder of why the .22 LR round is such a fun one to plink with. The Walther Arms pistol retails for around $220.

Check out the Walther P22 and other handguns inside the Guns.com Vault and collection of Certified Used Guns.