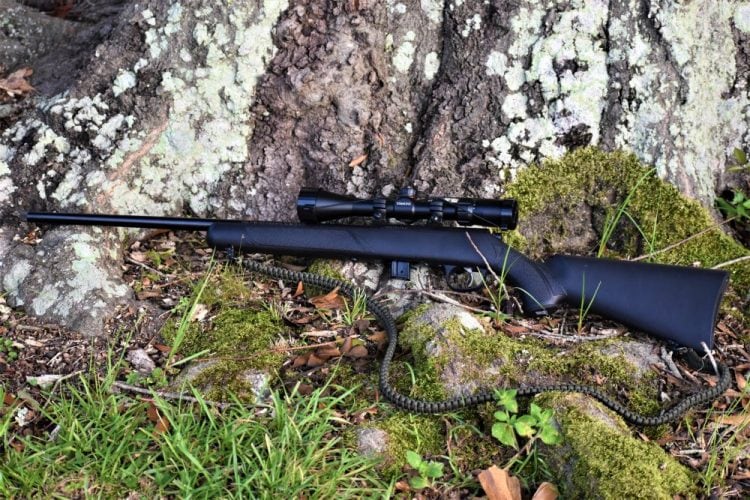 This Marlin XT-22 has been a solid plinker over the past several years. (Photos: Chris Eger/Guns.com)

There is little more satisfying than hitting the range with a bolt-action rimfire rifle, and this Marlin XT-22 has clocked in regularly for the past six years.

First introduced in 2011, Marlin’s XT series replaced the company’s legacy North Haven, Connecticut-made “JM” Model 925. Debuted after Remington picked up the company, the XT added the Pro-Fire adjustable trigger– which is user tunable from 6 to 3-pounds — as well as a new stock design that replaced the old checkering seen on Marlin’s legacy rifles with a palm swell and lightly textured grip areas.

A “Mayfield Marlin,” my personal XT-22 (when chambered in .17 HMR it is the XT-17) was produced in Remington’s Kentucky plant in 2013. Currently, the guns are made in Huntsville, Alabama at Big Green’s mega-plant in Rocket City.

As a personal confession, no matter what I have in the gun safe, this humble $200~ rimfire probably gets more use than any other firearm I own. It is just flat-out pleasing to shoot and it gets a workout at least once a month in regular trips to the range. There is just nothing like sitting at the bench and zapping tiny circles at the 50 to 100-yard mark while zoning out and letting the stress melt away. It’s a good thing. Lead therapy, if you will.

This budget MOA rifle has an ordnance grade steel 22-inch Micro-Grooved barrel with a 1:16 twist and is exceptionally accurate, especially for the money. I find it shoots most loads, even bulk rounds like Blazer 40 grain (which is back down to $21 for 500) to well under an inch at 50 yards and within an inch at 100 provided you are trying and shooting from a bench using a solid rest. This could surely be dialed in more with match ammo like Eley or Lapua. Moreover, it shoots consistently, which is saying something as .22 ammo, in general, is consistently inconsistent. 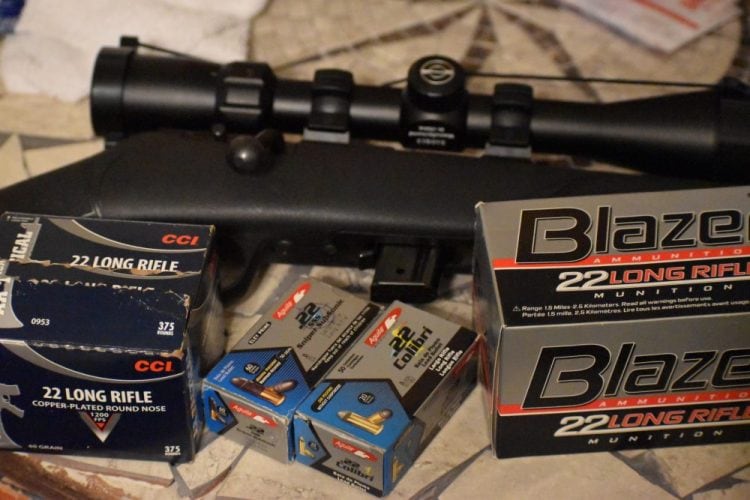 My XT-22 has not proven to be ammo sensitive and usually gets a steady diet of Blazer 40-grain or CCI bulk, with the occasional addition of specialty loads like Aguila’s Colibri or SubSonicSniper.

Very lightweight, the synthetic stock has a full pistol grip and molded in swivels. When it comes to weight, you are looking at a rifle in the 5-pound range. When equipped with an entry-level Simmons 3-9x40mm scope, 1-inch Weaver rings, a paracord sling, loaded mag and a suppressor, it still comes in at well under 7 pounds. 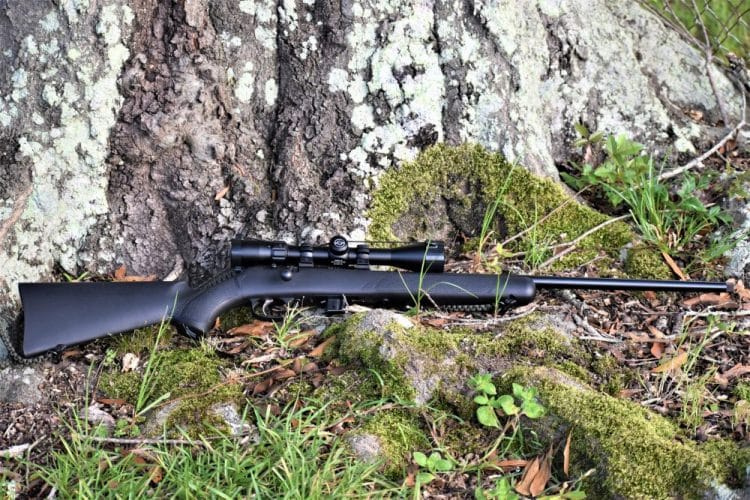 The gun is packable all day and gets a lot of use around camp during the fall as everyone at some point seems to take it for a spin, especially when a can is attached.

Speaking of suppressors, the variant I have is the XT-22RZ, which is still in production and readily available, and comes with a factory threaded barrel with a 1x28TPI pitch. When I first bought mine, there were only about 25 states that allowed hunting with suppressors, and now there are 40 with over a million “silencers” in circulation. 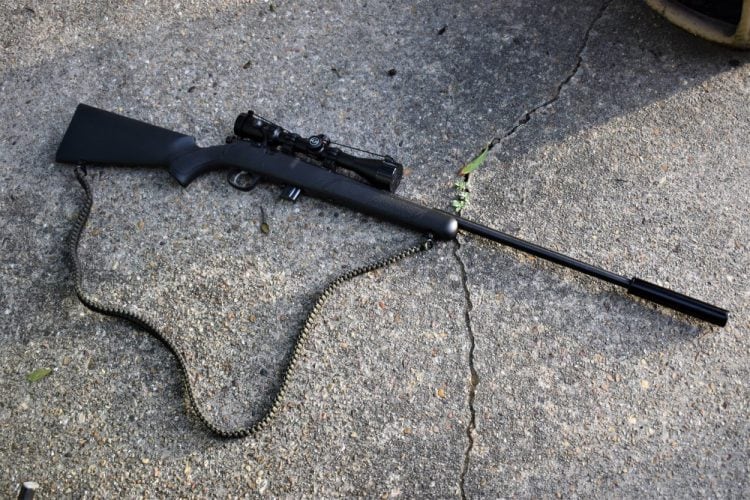 My downright ancient Tactical Innovations TAC65 adds 6-inches and 4.2 ounces to the rifle.

Pundits preach the use of suppressors for hearing protection and safety, and I can get on board with that as I have carried tinnitus around with me for years, but even if you set those really good reasons aside, shooting a suppressed rimfire bolt gun is just big-time fun. Even if you ditch the can and substitute subsonic loads like Aquila’s SubSonicSniper, you can still enjoy quiet time without a tax stamp.

While some models come with simple leaf-style iron sights, this one did not but did ship with a Marlin-supplied scope mount while the receiver is factory drilled and tapped. The $40 Simmons 8-Point suits it well but could use higher rings as the bolt only clears the eyepiece by a few millimeters. 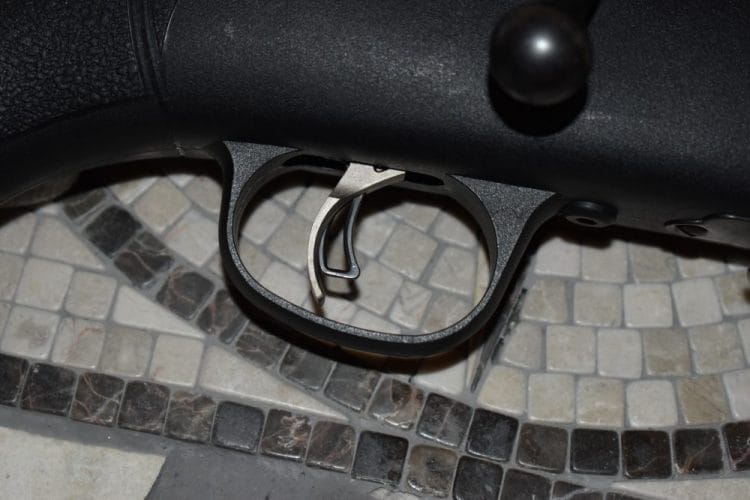 The Marlin Pro-Fire adjustable trigger, which is user tunable from 6 to 3-pounds, replaced the older T-900 trigger system Marlin used. It is easy to adjust with a 3/32-inch hex key although be careful not to crank it down too far as you can increase the trigger weight until it will not release the sear. 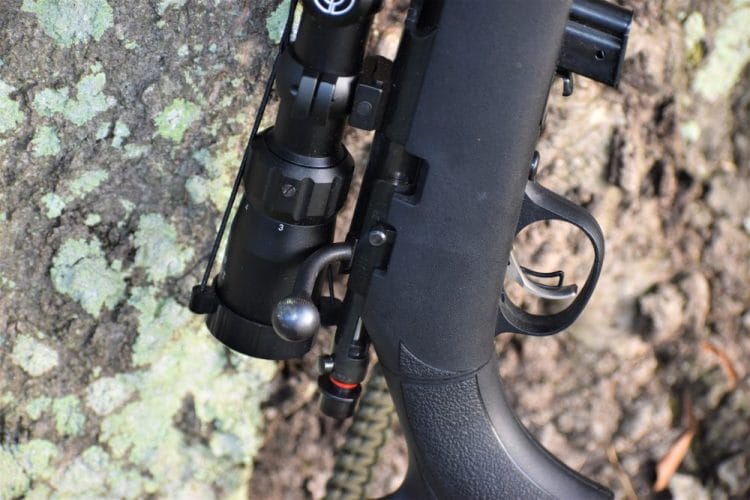 The bolt shows a red cocked indicator while a two-position safety lever located on the right-hand side of the gun with “safe” to the rear and “fire” forward. I find it easy to activate with my thumb.

The rifle uses the same 7-round single stack detachable magazine that Marlin has had in circulation for decades and they are readily available. 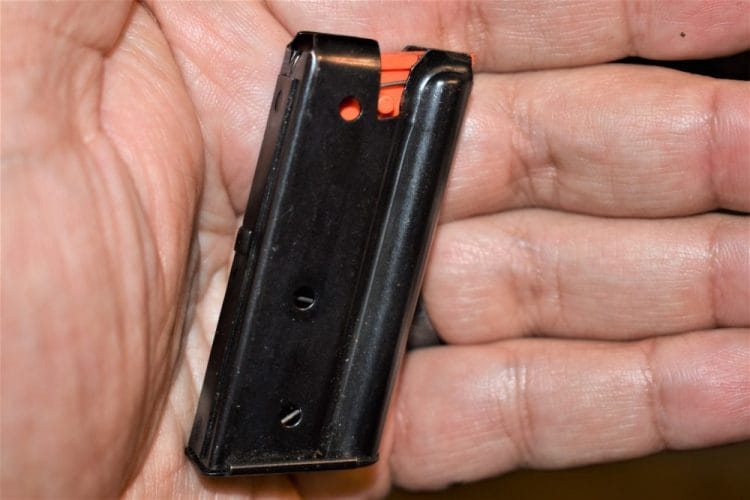 These simple seven-round mags have been used by Marlin for decades in their bolt-action rifles. They cost about $12.

Marlin’s 10-round autoloader mags also fit, or you can utilize a single shot adapter sled for less than the price of a Happy Meal. The latter can really help when using the XT-22 as a training rifle for new shooters. For those who prefer a more Model 60 style tubular mag, there is a different XT-22 model with that feature. 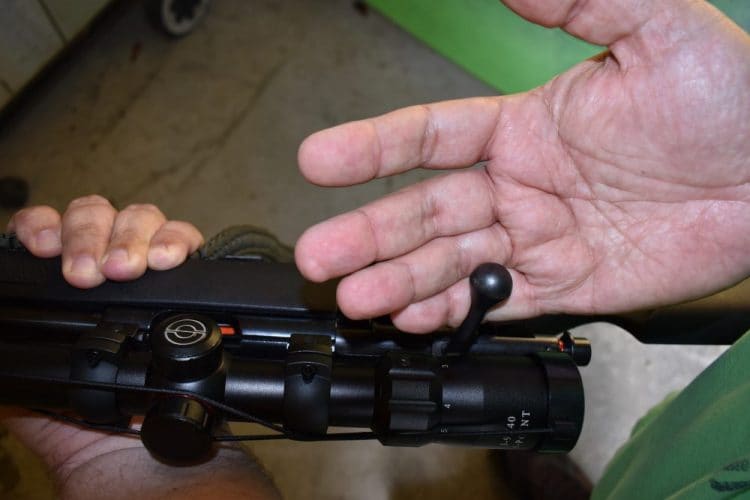 The rifle has a very short bolt throw and range, after all, it is a .22LR. I sometimes find myself working it with just my forefinger and thumb rather than the whole hand as I have big mitts. Note the narrow clearance of the eyepiece. I really should get higher rings, but these have worked well in the past several years and if I go to get new rings, I’ll probably get new glass and the whole thing could just escalate from there. The takeaway here is to learn from my mistake and get higher rings in the first place. 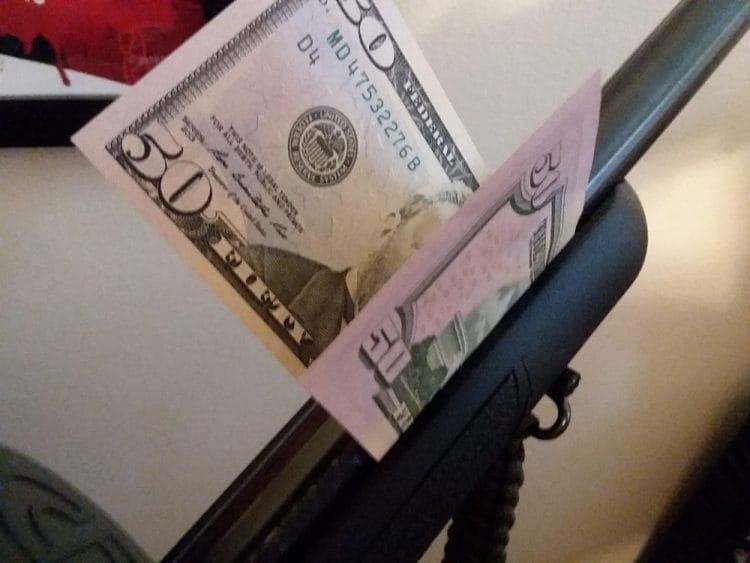 The barrel is mostly free-floating except for a forward receiver mount in the first inch of barrel. This undoubtedly helps contribute to the rifle’s accuracy. Also, my distant relatives now probably know why their birthday card Grants sometimes smell like Ballistol.

For those who prefer wood furniture, Marlin makes an XT-22 in that version as well.

When it comes to the XT-22 after years of shooting this one, I can tell you that disassembly and cleaning — vital in a gun that eats lots of unjacketed lead ammo– is easy. Also, in the easy column is trigger adjustment and mounting optics or accessories. Extra mags are only like $12 and can usually be found locally for instant enjoyment. On the downside, the bolt was kind of crunchy for the first few boxes but that soon worked itself out.

Unless you want to get into CZ or even Anschutz money, the XT-22 will serve most needs with accuracy to spare.

For more, check out the product listing for the XT-22 and other Marlin firearms inside the Guns.com Vault and collection of Certified Used Guns.