The 6 Best Handguns for Home Defense

Handguns are the most logical choice for home defense. By design, they’re easy to maneuver in enclosed spaces, engage targets at short distances, and control with one hand, which makes the other available to hold a phone and call 911. Deciding on your go-to home defense gun, especially for first-time gun buyers, can be difficult, though. There are dozens of top-tier brands and literally hundreds of models between them. So, how do you narrow your selection?

If you ask Guns.com, we recommend that you start by exploring duty pistols. Service weapons used by law enforcement and military. To procure such items, these organizations run the guns through their paces and test them under real world conditions. However, when selected a company gets much more than a steady stream of revenue. They also get bragging rights. A title to declare and results to show they earned it.

Under these conditions, Guns.com has selected six models as the best choice for home defense handguns. These include the Glock 17, Glock 22, Sig P320, Sig P229, Smith & Wesson M&P, and Springfield XD. 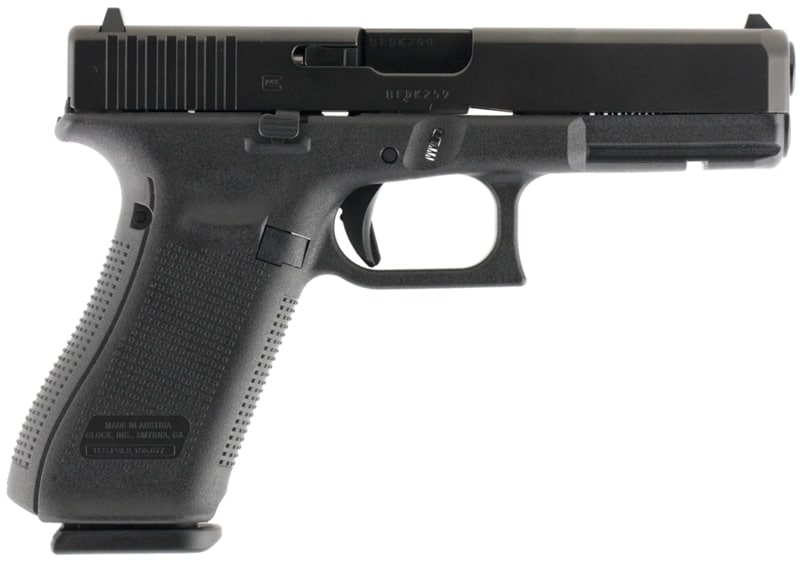 Glock is the pound-for-pound champion when it comes to service pistols. The Glock 17 is not only the Austrian-gun makers first design, but also number one contender. A variation of the fifth generation Glock 17 is the service weapon for agents in the Federal Bureau of Investigation, the premier law enforcement department in the U.S. In terms of firearms, what the FBI selects sets the bar for other federal, state and local agencies.

In 2016, the FBI awarded Glock a contract valued up to $85 million over a 10-year period. While the price may seem excessive, the price covers service weapons for thousands of agents in other federal law enforcement agencies. Yet, the news here wasn’t that the FBI went with Glock — the company had been servicing the FBI for decades prior — but rather the agency return to 9mm after 20 years of carrying .40-caliber pistols.

Among shooters, the FBI made a clear statement about cartridge choice. The agency argued that 9mm offered greater benefits than .40 S&W. Their testing revealed that agency-approved self-defense 9mm ammo outperformed most .40- and .45-caliber ammo while offering more control. In other words, agents with a Glock 17 could make more accurate and effective shots. 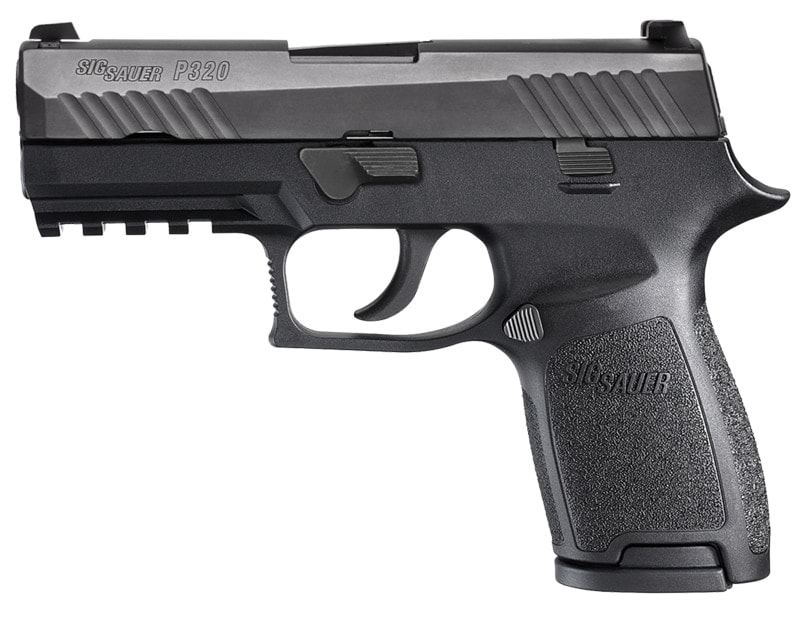 Sig Sauer is the current heavyweight champ of service pistols. In 2017, the U.S. Army selected the Sig P320 as their official handgun. The $580 million contract would replace a 30-year supply of the Army’s Beretta M9 pistols. Much like the FBI, the Army sets the bar for other branches of the military. However, Sig’s design is also becoming popular among local police departments across the country.

The P320 design made for the military, the M17 and M18, are equipped with a polymer frame and manual safety. However, unlike Glock pistols, which are equipped with standardized controls and features, the Sig P320 is available with a variety of features and calibers. Still, no matter the variant you select, the performance will match across the board. 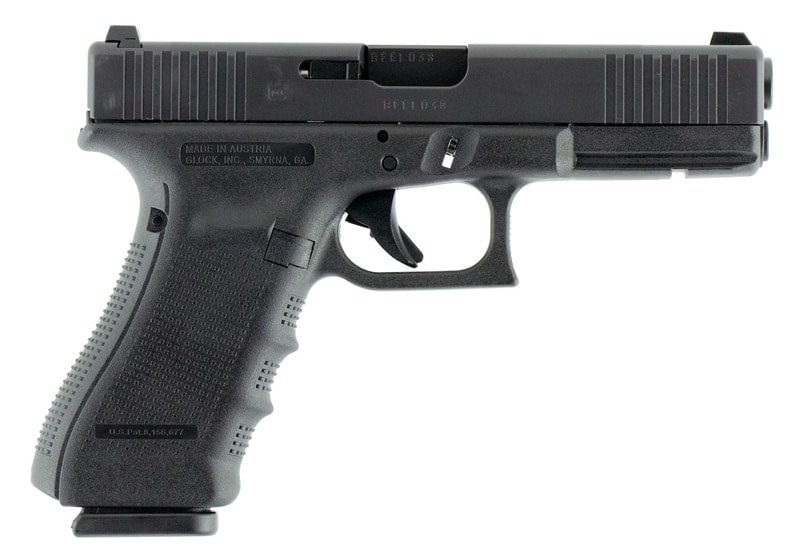 You shouldn’t pooh-pooh .40-caliber Glocks. The FBI trusted the Glock 22 for nearly 20 years and only switched back after newer and better 9mm ammo became available. Federal agencies like the Bureau of Alcohol, Tobacco, Firearms and Explosives and many large departments across the country like Los Angeles Police and Illinois State Police still carry the Glock 22. A Glock in any caliber will perform like a Glock.

Compared to the Glock 17, the Glock 22 uses a 15-round magazine instead a 17-round magazine. That’s because .40 S&W is slightly bigger in diameter than 9mm. But also the Glock 22 is not yet available as a Gen 5 model. The most noticeable difference between Gen 4 and Gen 5 is that the Gen 4 still has finger grooves on the grip. 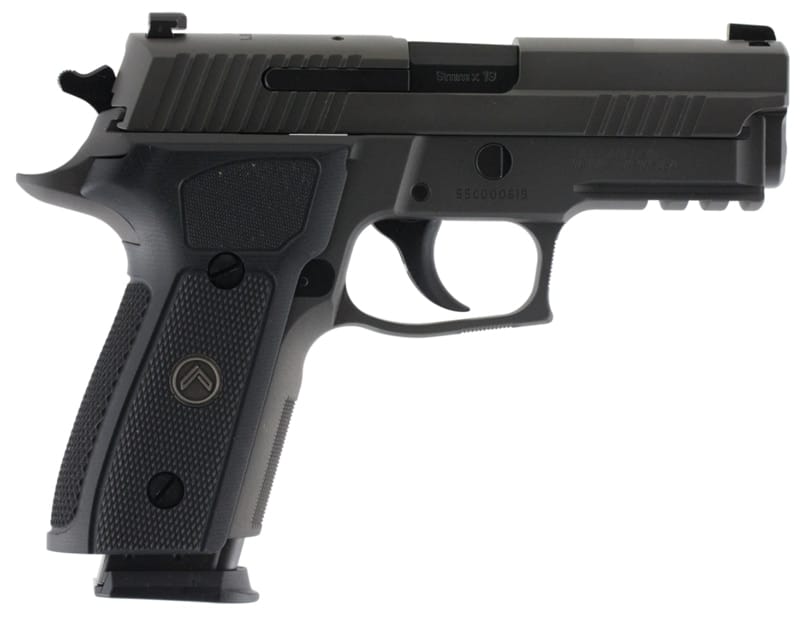 Like the Glock 22, the Sig P229 is a strong contender. Several agencies within the Department of Homeland Security — like the Secret Service, Air Marshals, Coast Guard — use the Sig P229. The chambering varies by agency, but it’s offered in the civilian market in 9mm, .357 SIG, and .40 S&W. Unlike the polymer frame and striker-fire system found in most duty guns, the P229 is a hammer-fired pistol with a double- and single-action trigger and an all-metal construction. 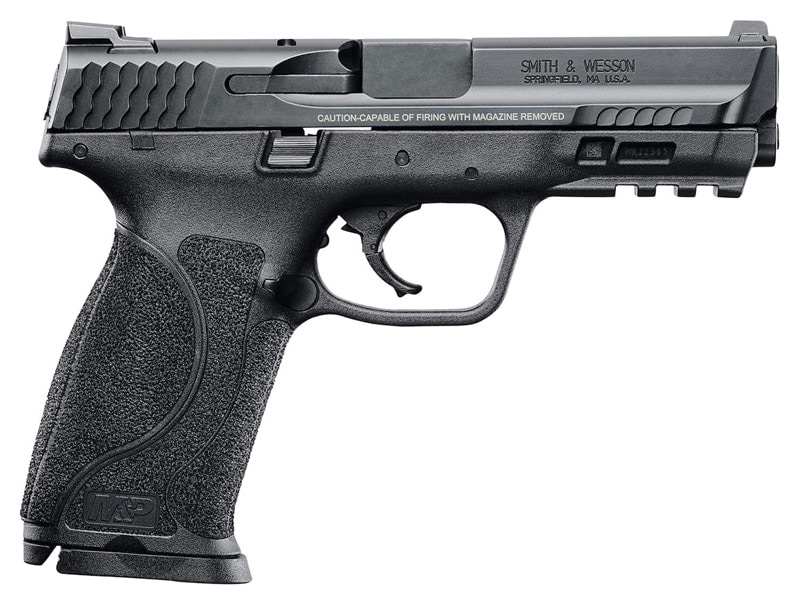 With more than a century in business as a gun maker, Smith & Wesson offers some of the best handguns around. But it’s their Military & Police pistols that fit the bill for this list. Some of the country’s biggest police departments — Detroit, Los Angels Sheriff’s Department, and Colorado State Police come to mind — list M&P handguns as an approved carry pistol.

If you’re accustomed to the workings of a Glock pistol, using a Smith & Wesson M&P should be a cinch. In many cases, some fans prefer the design over Glocks and will accept nothing less. The polymer-frame design is available in a variety of calibers, and with or without a manual safety.

Police departments in big cities like Chicago and Houston approved the Springfield XD design to be carried by their officers. The XD is another design that some say has improved upon the striker-fired design popularized by Glock. The standard XD comes with a host of calibers and features, such as an optional thumb safety. Outside of service, the XD series has become so popular among civilian shooters that Springfield released lines of pistols ranging from duty to concealed carry to competition.

The handguns in this list are battle tested options proven by dependable sources. However, if you pose the question to others, answers will certainly vary. In many cases, the basis for such an answer comes down to personal preference. While these are reliable options, no doubt, use this list as a guide for your purchase. Most, if not all, of these options are available for rent at ranges across the country. During a visit, try these pistols out and get a feel for what you like and don’t like.

For more on home defense guns, check out A Beginner’s Guide to Home Defense Guns.