The Desert Eagle’s cult-like followers have long been drawn to the hefty build, American quality, and hard-hitting calibers of the pistol’s gas-operated semi-automatic action. While many acquire them for machismo alone, the big bore Deagles make serious hunting sidearms and the newest introduction to the lineup is no exception. Quite the opposite in fact. Magnum Research’s recently-introduced round, the .429 DE, is found on the same XIX platform but opens up hot new performance to the Magnum world.

The new .429 Desert Eagle XIX looks and feels the part right out of the hard case. A hulky stainless steel slide is mated with tight tolerances to a stainless steel frame. The 6-inch barrel wears an integral muzzle brake that helps control recoil but adds to the audible ambiance. The pistol ships with one seven-round magazine, which is the same magazine as the .50 AE.

MSRP on our test gun is $2,143 for the complete pistol, right on par with the other magnum chamberings and similar finishes. The gas-operated, rotating bolt semiautomatic line of Desert Eagle pistols are capable of handling such higher pressure, increased-performance rounds. Integral rails both top and bottom allow ample room for add-ons, while combat-style iron sights come standard. The guns are built in Pillager, Minnesota and the attention to detail in fit and finish is evident. 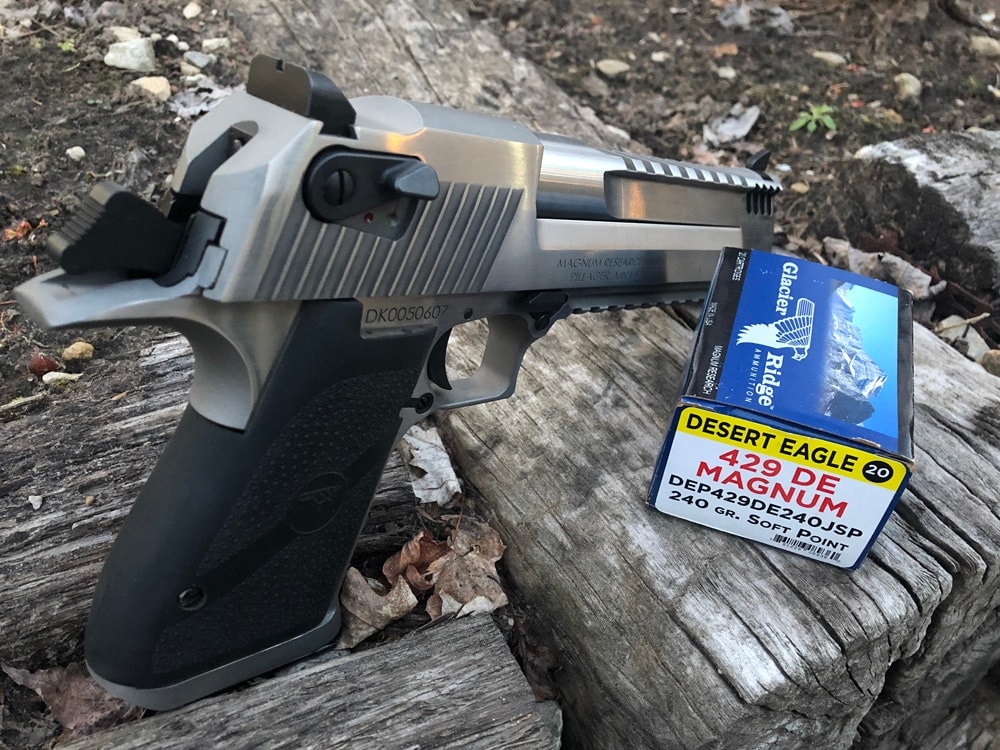 The gas-operated, rotating bolt Desert Eagle platform is perfect for the potency of the new .429 DE round. (Photo: Kristin Alberts/Guns.com)

The .429 DE was designed by Magnum Research to fill a niche in the market of potency in what is considered a .44 caliber round. While the guns are already chambered in either .44 Magnum or .50 AE, the new brainchild, per the factory, offers “a 25 percent velocity increase and 45 percent energy increase over a .44 Mag. It has a velocity of 1,600 FPS with 240-grain bullets and 1750 FPS with 210 grain bullets.”

How can Magnum Research claim the .429 as the most potent .44 Magnum round when it’s actually .429?  Astute shooters will realize the venerable .44 Magnum bullet diameter is in fact .429 as well.

The new round finds its roots with the 50 AE made popular on the Desert Eagle platform, but obviously necked down.  Brass is made by Starline, with loaded ammunition coming from HSM in Montana, topped with either Speer or Sierra bullets. Ammunition was launched simultaneously with the pistols, though demand seems to be outpacing supply. Two types of factory rounds define the initial run, though others are sure to follow. For now, hunters and shooters may select from either a 210-grain jacketed hollow point or 240-grain jacketed soft point. Twenty round boxes retail for $42.

Details on the Chambering

While the .429 DE is indeed a new round, few things are truly “original” anymore, especially in the cartridge world.  In this case, ballisticians will realize the .429’s similarities with the earlier .440 Cor-Bon round. The Cor-Bon similarly necked down the .50 caliber to .429 and nearly matched the performance of today’s .429 DE round. Where it failed, however, was in reliability in semi-automatic platforms like the Desert Eagle. The bottle-necked .429 DE headspaces on its 30-degree shoulder and makes use of a neck long enough to properly hold and crimp heavier bullets without the worry of bullets setting back under recoil as was most unwelcome with the .440 Cor-Bons. 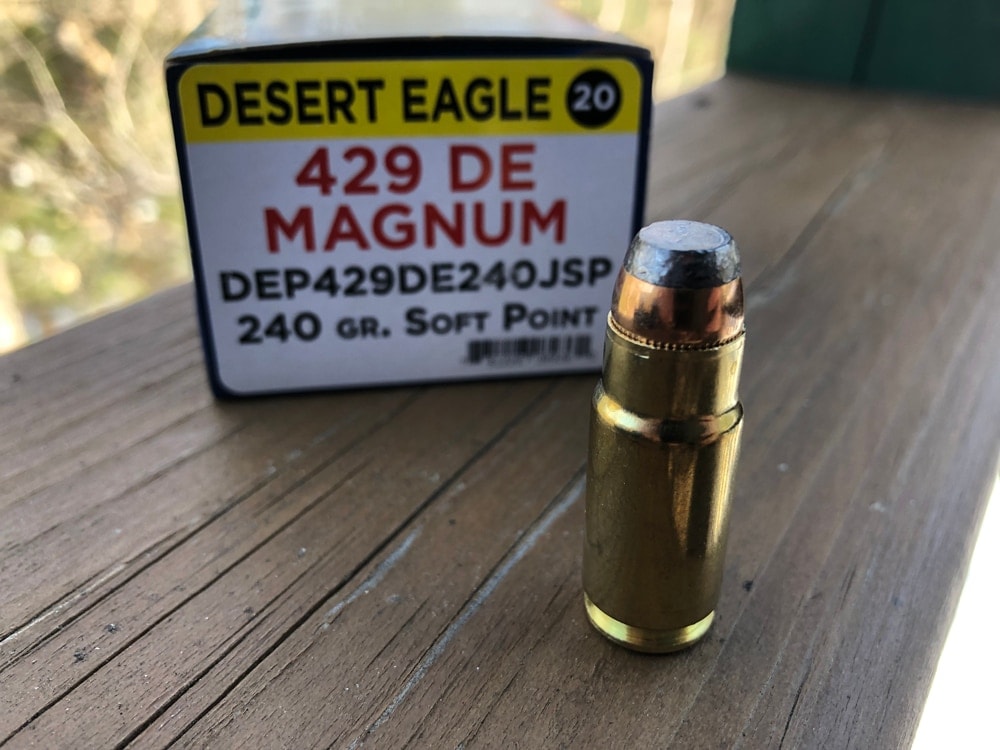 The bottle-necked .429 DE is based on the 50 AE round. It headspaces on a 30-degree shoulder and immediately comes in two projectile offerings, a 210-grain JHP and 240-grain JSP. (Photo: Kristin Alberts/Guns.com)

Thus it was that Jim Tertin, Magnum Research’s designer extraordinaire, worked to perfect the failed round into one that would match the reliability of his Desert Eagle pistols. I had the pleasure of visiting with Tertin at SHOT Show. While he remains humble about the design, it has clearly been a longstanding goal of his to create this round for hunters and shooters alike. At the end of the day, the new .429 runs reliably, hits with authority and does so with recoil less than anticipated.

The combination of recoil and report will certain keep shooters awake, but compared to the .50 AE chambering the new caliber is surprisingly controllable. In a Desert Eagle, the .429 DE maintains more than enough performance to harvest most any North American game.

The trigger on the test gun broke with great repeatability. At a hair under 4 pounds, it was crisp enough to aid accuracy.  While the full Picatinny style rail atop the piece is ideal for mounting an optic and would do well with a low-profile red dot or holographic-style, we worked with the straight irons. 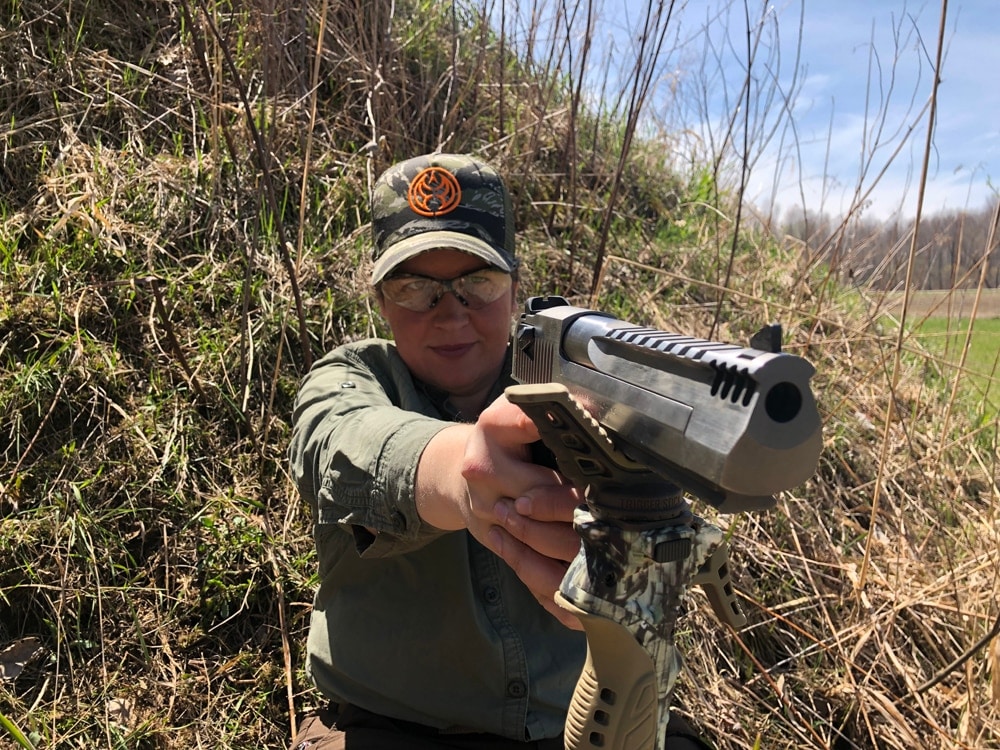 The new .429 DE is first and foremost a hunter’s handgun. Greater performance than a .44 Mag and must less recoil than a .50 AE. Firing the hefty piece from a Primos Trigger Stick is a real treat. (Photo: Kristin Alberts/Guns.com)

Like every Desert Eagle, holding the weighty 68-ounce gun is immediately empowering and pulling the trigger on the piece drums similarly rewarding confidence. The rubberized, rear-wraparound grips add to the controlled-feel and fit in the hand. As many can attest, Desert Eagles are aware they’re a handful for those with small paws. Yet, the large grip frame is still very manageable.

Hunters will find the round and the gun capable of taking down most any game. While the more rapidly expanding, lighter-weight JHP bullets are ideal for light-to-medium sized game, the heavier jacketed soft points should do a real number on bigger game needing greater penetration. Not only does the .429 DE offer increased ballistic performance over the .44 Magnum in general, but grants a full seven rounds of firepower, should it ever be needed.

Those wishing to dress up their existing Desert Eagle pistols will find multiple options in .429 DE top-ends for their Mark XIX’s.  Per the company, the 6-inch barrels “are compatible with any MK19 or Israel Desert Eagle pistol with a wide .830 rail on top of the barrel and uses a 50 AE magazine and bolt.”

Though the chambering is still young, the company already offers .429 DE barrels in: standard Black, Burnt Bronze Cerakote, Polished Chrome, Brushed Chrome, and even Stainless Steel with an integral muzzle brake.  New buyers will want to opt for the complete package, available just as my test gun.

Current owners of Desert Eagle pistols may do well to consider a .429 upper, but the meat of the market rests with those who desire serious performance in a hunting handgun without all the recoil associated with magnum calibers on other actions.  Regardless of the reason, have no doubt that the American-made Magnum Research pistols will turn heads on the range with appearance alone, but then backing that up with a practical blend of reliability, accuracy, and performance.