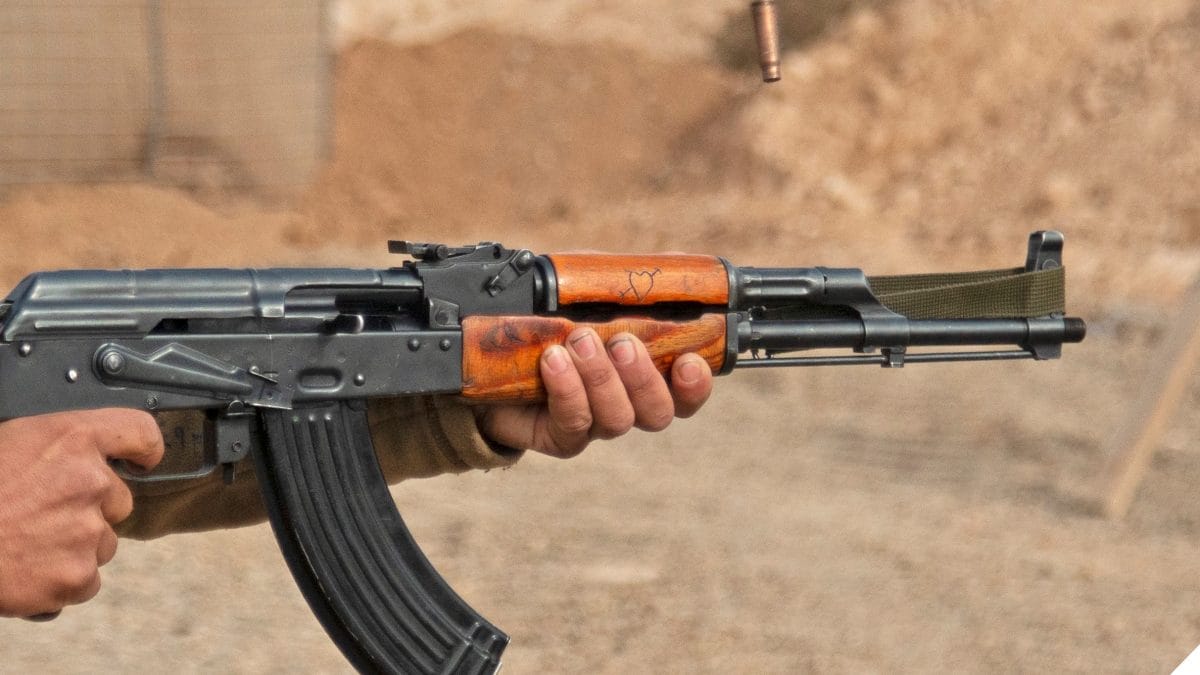 Mikhail Kalashnikov’s internationally recognized AK-47 is an iconic symbol in gun culture around the globe, one with a universal adapter. Developed beginning in 1944 as part of a competition among various Soviet firearm designers to craft the Motherland’s newest automatic carbine (avtomat), the new gun was to meet a requirement of being similar in size to a submachine gun while firing a more effective round than a pistol caliber. By late 1945, Sgt. Kalashnikov’s initial rifle concept was far enough along to win a nod for further development and the next year it was paired with the Soviet Union’s new M43 intermediate cartridge, the 7.62x39mm that had been adopted for use in the SKS rifle. 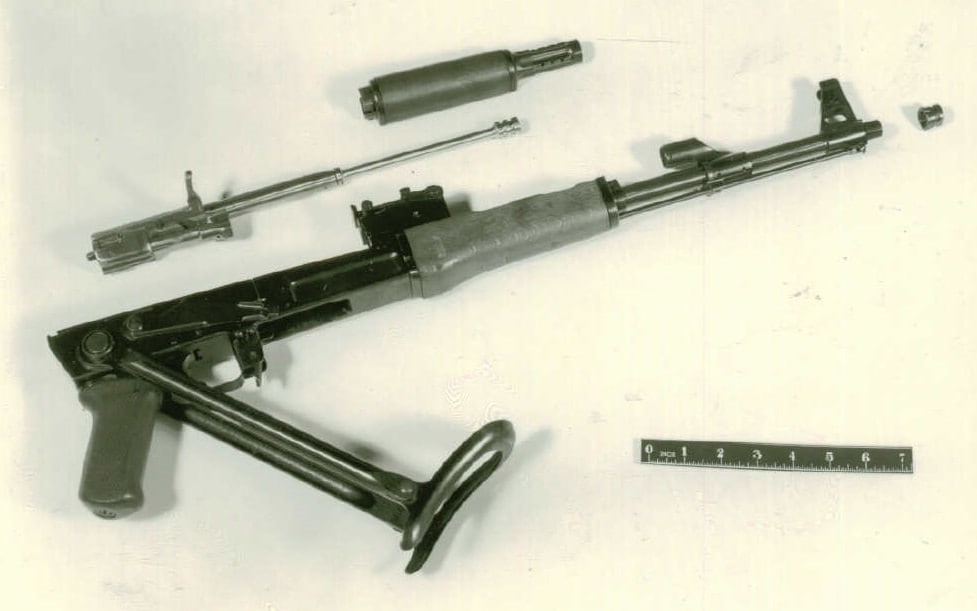 Trialed against several experimental designs with the German WWII-era StG44 as a benchmark control gun, Kalashnikov’s prototype AK-46 was sent back to the drawing board for improvements and finally, in 1947, the revamped AK-47 appeared and began trials the next year. In August 1949 — 70 years ago this month — the Soviet Red Army gave its stamp of approval and the Avtomat Kalashnikova became Moscow’s standard infantry weapon.

Gas operated with a short-stroke piston and a rotating bolt, the initial models of the AK-47 used a simple stamped receiver. These guns, known today as Type 1 variants, were soon replaced with a model that used a milled steel receiver in late 1949, known logically enough as the Type 2. Then came the extensively machined Type 3 third generation in 1954.

Soon, the know-how to produce the simple but effective Kalash pattern guns was exported to other like-minded countries in the Communist world view. This included Red China, who adopted the AK as the Type 56, East Germany as the MPi-K series, North Korea as the Type 58, Yugoslavia where it went on to become the Zastava M70, and Finland where they were produced by Valmet. Production soon also spread to Bulgaria, Egypt, Romania and elsewhere.

By 1959, what was effectively the 4th generation of AK, the AKM (Avtomat Kalashnikova Modernizirovannyj) or modernized AK, became the Soviet standard, using a stamped receiver. This latter variant was the gold standard when it came to Kalashnikovs until the 5.45x45mm AK-74 was adopted in the 1970s. 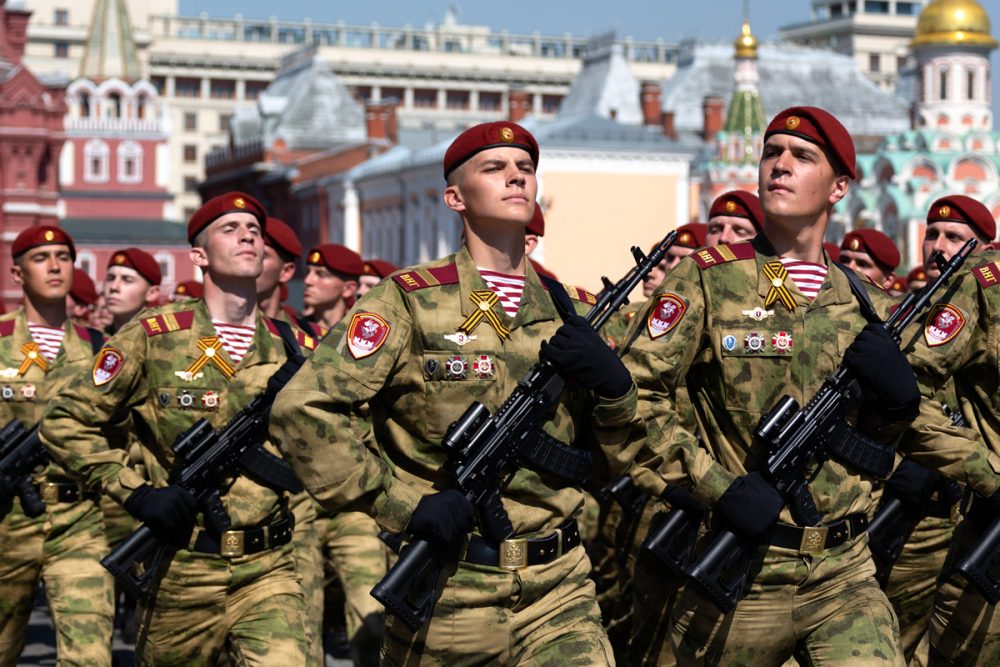 In all, an estimated 100 million or more AK series guns were made across the world and in a dizzying array of variants. Today, the Russian army fields the new AK-100/200 series guns in 5.45×45, seen in this image from the 2019 Victory Day Parade in Red Square (Photo: Russian Ministry of Defense)

Creeping into the West

While the Soviets took extreme measures to keep their new toy under wraps from prying eyes on the other side of the Iron Curtain (even though it was shown off in Soviet cinema), word nonetheless filtered out. In April 1953, the CIA cataloged a report of a Soviet rifle regiment carrying “new type submachine guns and carbines.” While the carbines were SKSs, the sub gun reported was the AK, although you wouldn’t know it from the sketch forwarded to Langley. 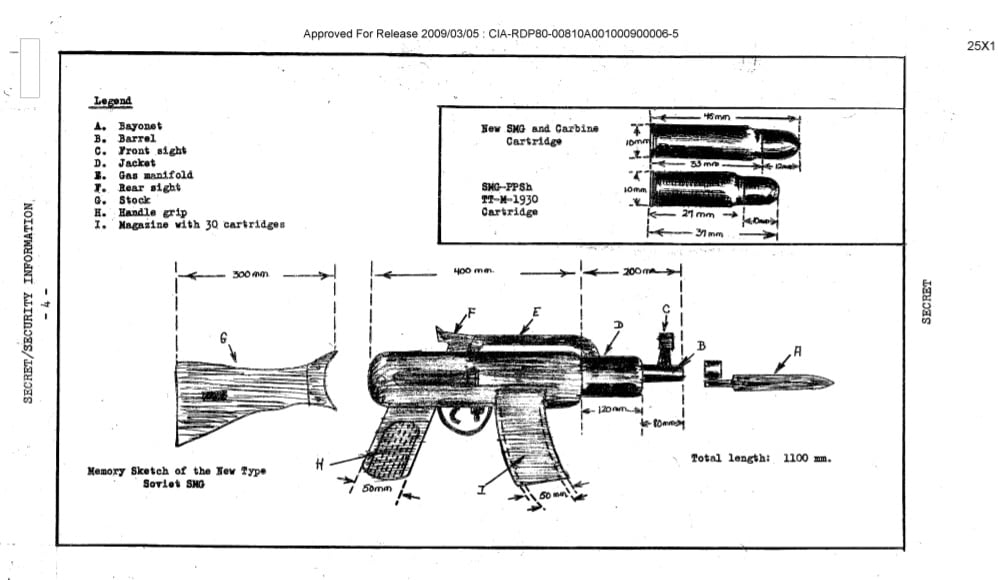 You the wonder how close the agent got to an actual AK. (Photo: CIA)

By 1960, the CIA had grainy photos of folding-stocked AKs seen in Poland and, according to the Springfield Armory National Historic Site, they received a captured Tula-made 1954-dated AK from Aberdeen Proving Ground the same year and in 1961 a folding stock model, which they still described as a submachine gun. 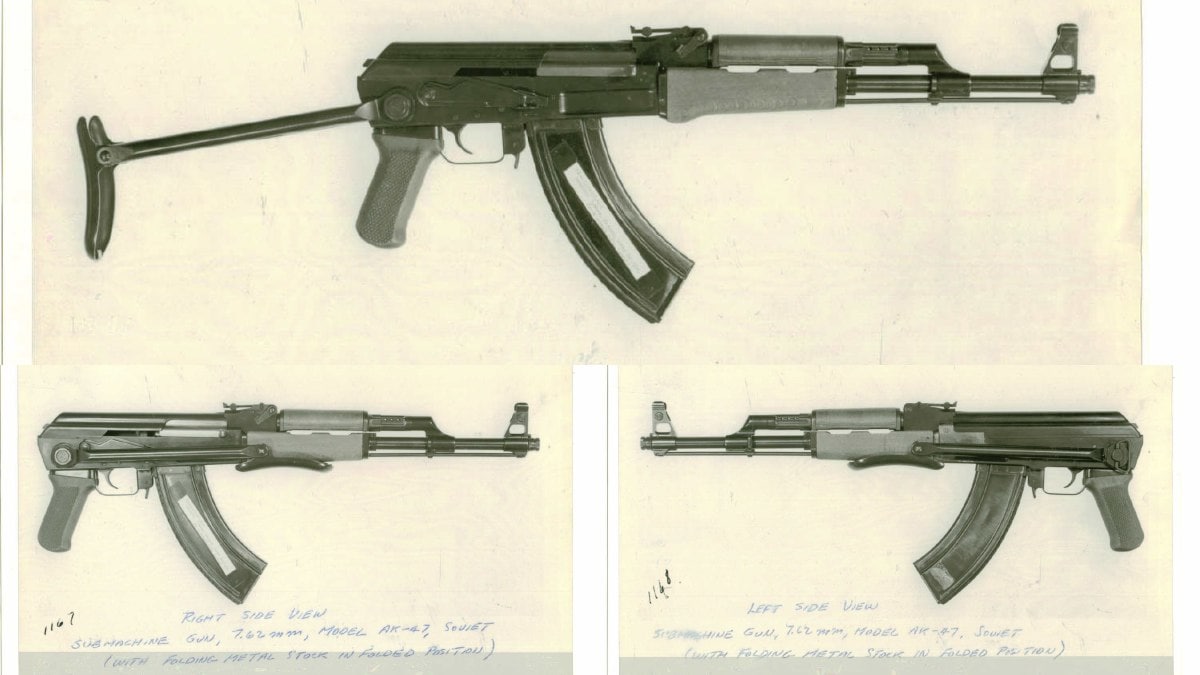 As the U.S. became increasingly involved in the conflict with Soviet and Chinese-supported North Vietnam after 1964, Springfield Armory added more AKs to their collection — including Type 56s  — that were recovered from the battlefields of South East Asia. 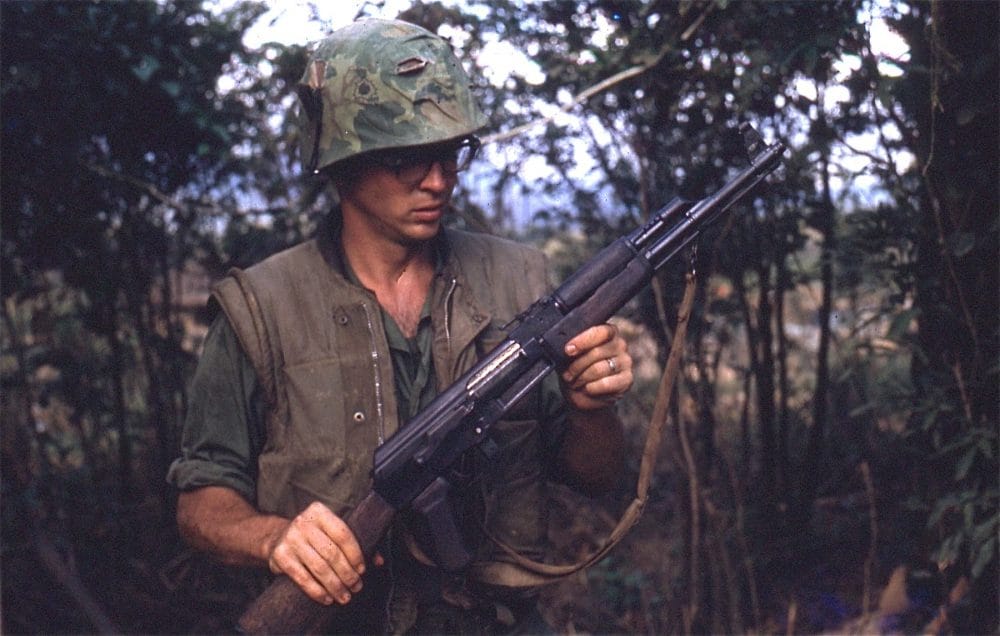 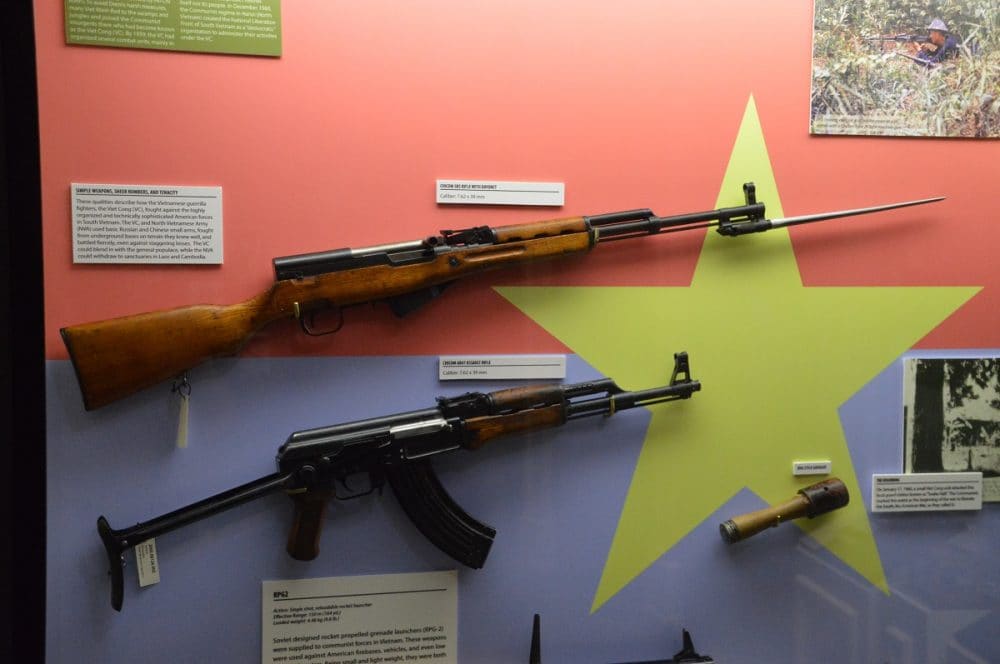 The Soviet Union and China shipped both the wood-stocked semi-auto SKS and the much handier select-fire AK/Type 56 to North Vietnam during the conflict, as well as other arms. (Photo: Chris Eger/Guns.com)

When stacked up against the M14, the AK was only nominally lighter but a man armed with it could carry more ammo. Compared to an M14-armed Soldier or Marine with 300 rounds of ammunition, a VC or NVA foot soldier with the same amount of ammo would save more than three pounds. The M16 would later reverse this equation. 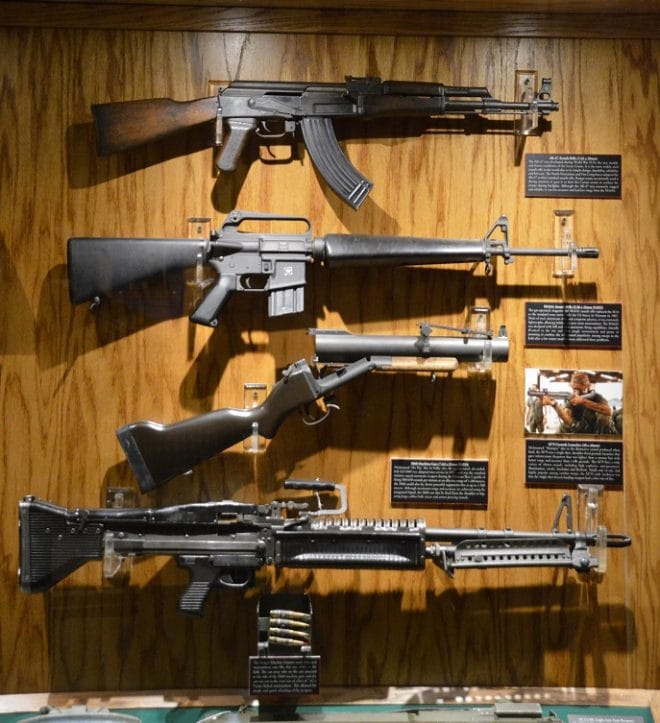 In Vietnam, the AK faced off against the US M14 and M16 rifle systems (Photo: Chris Eger/Guns.com)

By 1970, the U.S. government was even in the surplus AK47 business, brokering a deal with formerly Moscow-allied Indonesia for a batch of Kalash for the government of Cambodia. The Indonesians were reportedly eager to swap the guns “for the more desirable M16s.”

Soon, the AK had become so common worldwide that U.S. troops were often given familiarity training on the platform. 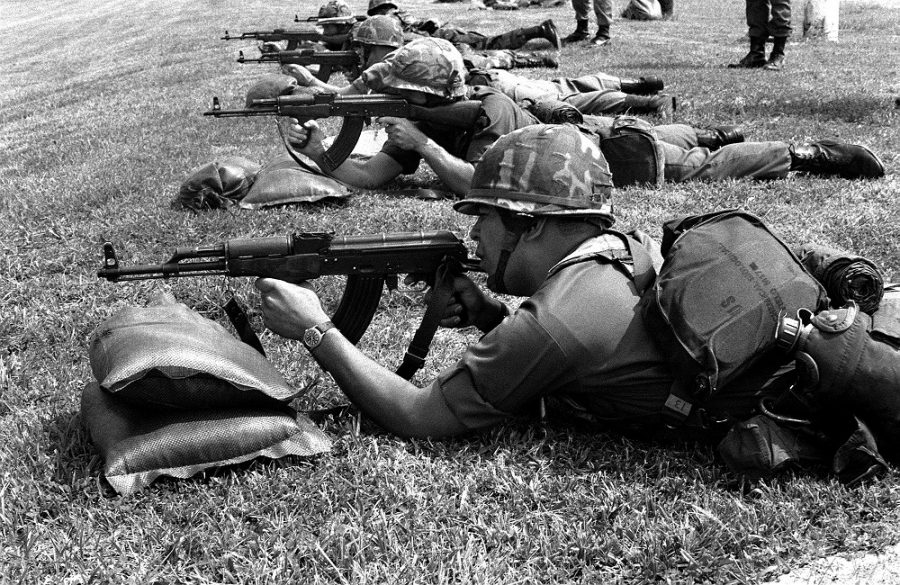 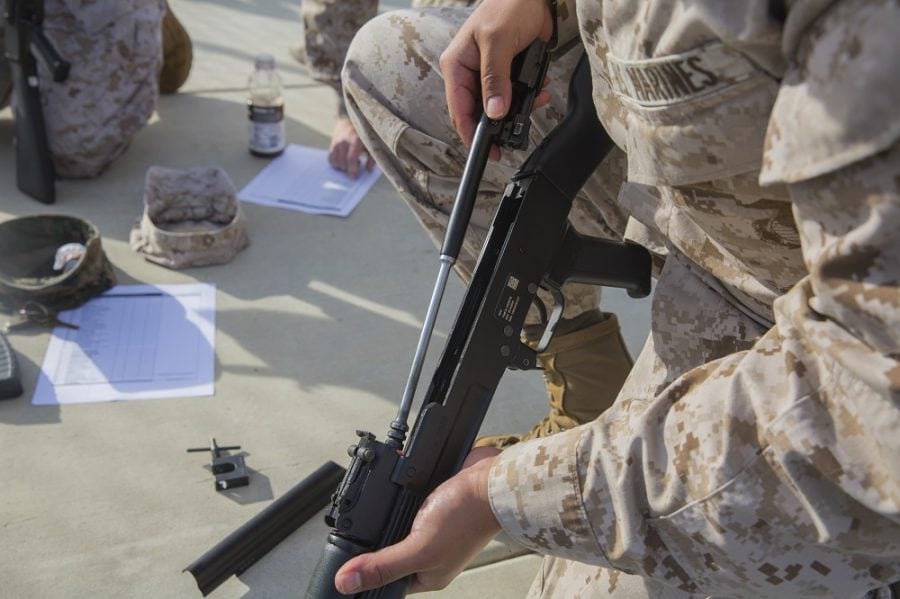 The more things change…Marines in Camp Pendleton learn the inner workings of a Bulgarian Circle 10-marked AK in 2018 (Photo: Dept of Defense) 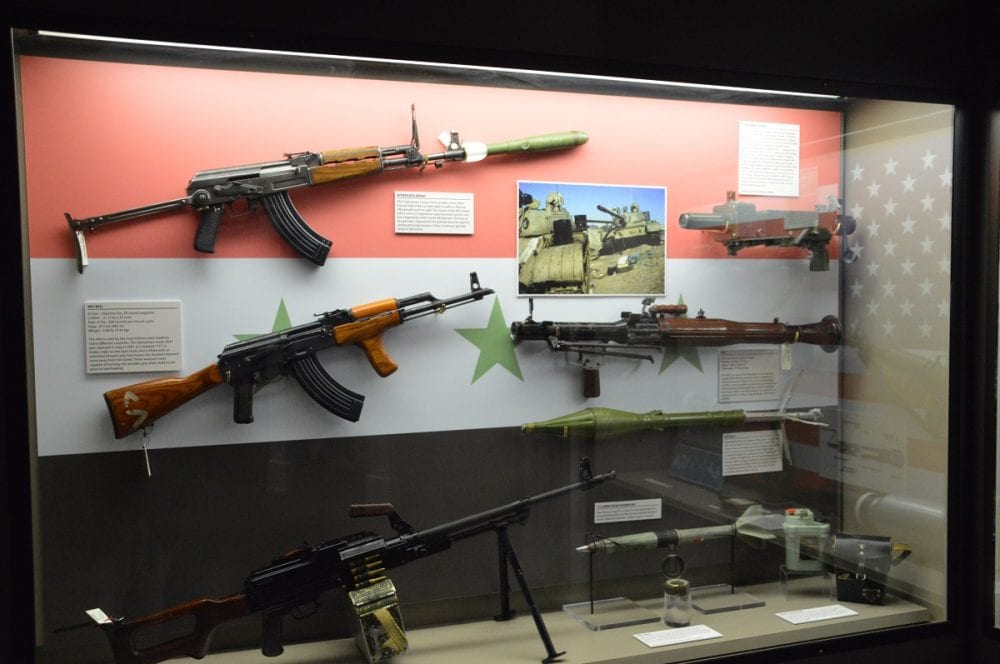 U.S. troops in Iraq and Afghanistan in the 21st Century faced AK variants not too different from the ones their grandfathers did in Vietnam. This case of bring backs includes a Yugo-made milled M70 with a rifle grenade mounted as well as a stamped Romanian pm.63/65 with its distinctive “dong” forearm grip (Photo: Chris Eger/Guns.com)

Meanwhile, except for a handful of vets bring backs from Indochina, the first Kalashnikovs to hit the U.S. consumer market was the semi-auto Valmet M62S, which was imported commercially starting in the mid-1960s. Valmet continued to ship increasingly better designed M70 and M80 series guns to America in multiple calibers until they were barred from import in 1986.

By the Reagan administration, the land of apple pie and Rambo franchise movies (Apocalypse Now had used Type 56s obtained in the Philippines in 1979) had whet an appetite for a lot of AKs. This demand was soon met by Maadi ARMs from Egypt, FEG-made SA85s, and boatloads of Chinese-made semi-auto Type 56 clones marketed under banners ranging from Poly-Tech, Clayco, Norinco and others. 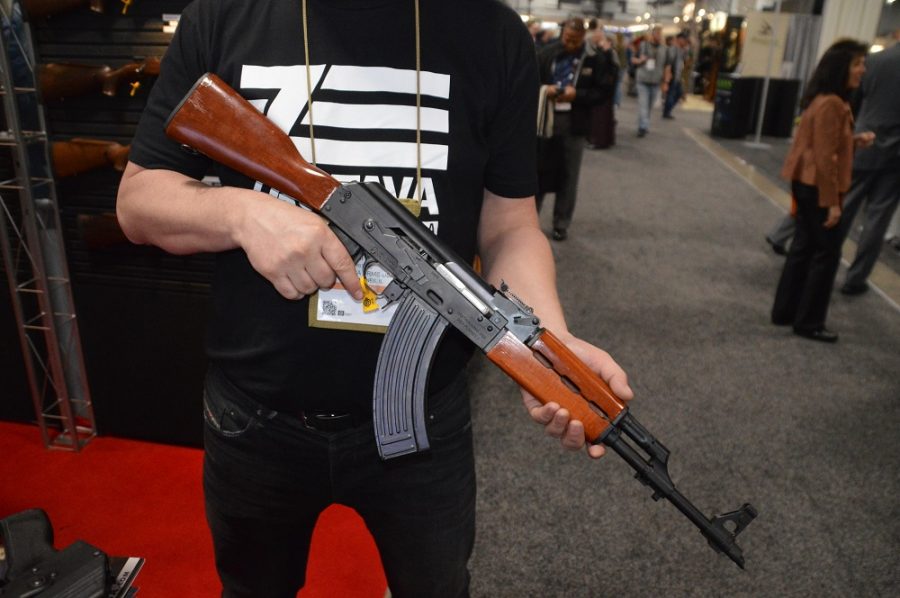 Zastava has been exporting versions of their M70 line to the U.S. since the Cold War defrosted. (Photo: Chris Eger/Guns.com)

When the door slammed shut on imports of rifles from China in 1994, the end of the Cold War opened the former Warsaw Pact countries to U.S. export possibilities and Bulgarian Circle 10 guns, Yugoslavian/Serbian Zastava-made AK/PAP and NPAPs, Romanian Cugir-made WASRs and others soon were headed West although the decade-long Federal Assault Weapon Ban saw many of these come into the country wearing such cosmetic abominations as thumbhole stocks and 10-round mags. This is the period when AK collectors first became acquainted with 922r compliance and the gem that is TAPCO — later augmented by Khyber Customs.

Between 1990 and 2015 the National Shooting Sports Foundation estimated that some 4.6 million modern sporting rifles were imported to the U.S. from overseas, with many of those being AK-types. 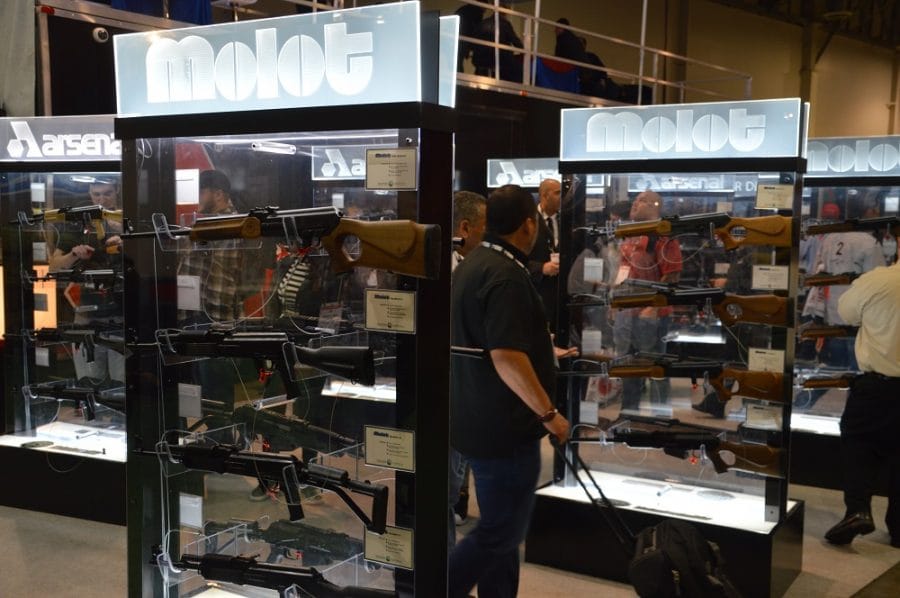 When it comes to Russian-made AK variants from vendors such as Molot, a brief window opened for these gems until Congress passed sanctions against a host of Russian-state-owned gun makers as a response to the country’s interaction with Ukraine. (Photo: Chris Eger/Guns.com)

By 2000, Las Vegas quickly became a hub for domestic AKs, with Arsenal standing up to produce guns in conjunction with Bulgaria’s world-famous Circle 10 factory, while Jim Fuller’s Rifle Dynamics shop made a name for themselves in unique AK creations. In their wake would follow companies such as Krebs Customs in Illinois and Lee Armory in Arizona. 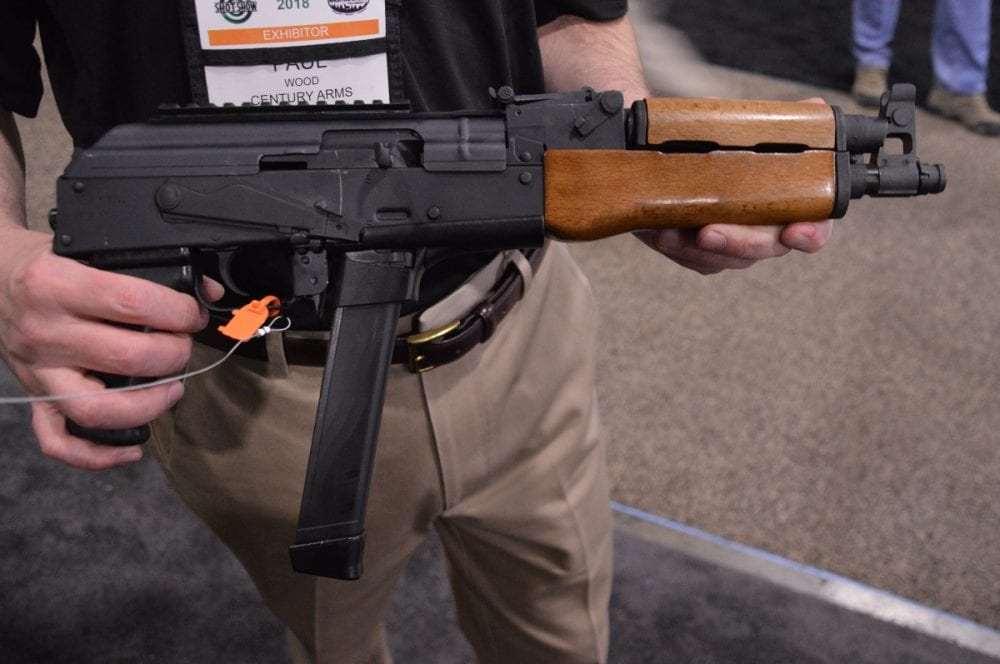 AK-style handguns, such as this 9x19mm Romanian-made Draco NAK9, are somewhat unique to the American consumer market and extremely popular (Photo: Chris Eger/Guns.com)

With Americans increasingly turning to AKs, companies such as Century Arms and Palmetto State Armory began increasingly to shift from making Kalash from imported European parts kits with enough 922 parts to be legal to rolling their own all-U.S.- made guns such as the VSKA. This came as Kalashnikov Concern set up shop in Florida and began to make their own U.S. produced guns.

Today, with events like the annual Red Oktober Kalashnikov Championship and Kalash Bash becoming increasingly more common and well-attended, it is not hard to see that the world of American AKs and the people that love them is growing. 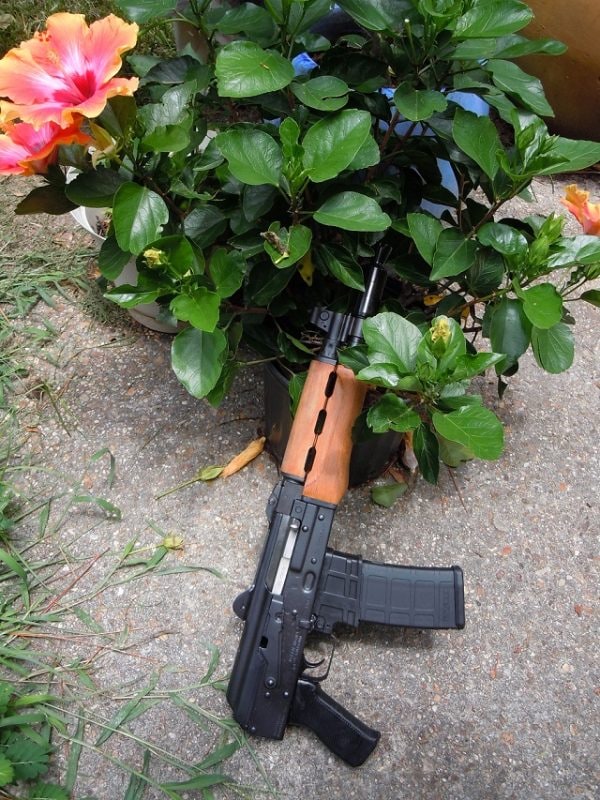