Come Get Your Fill of Some Beautiful BBQ Guns 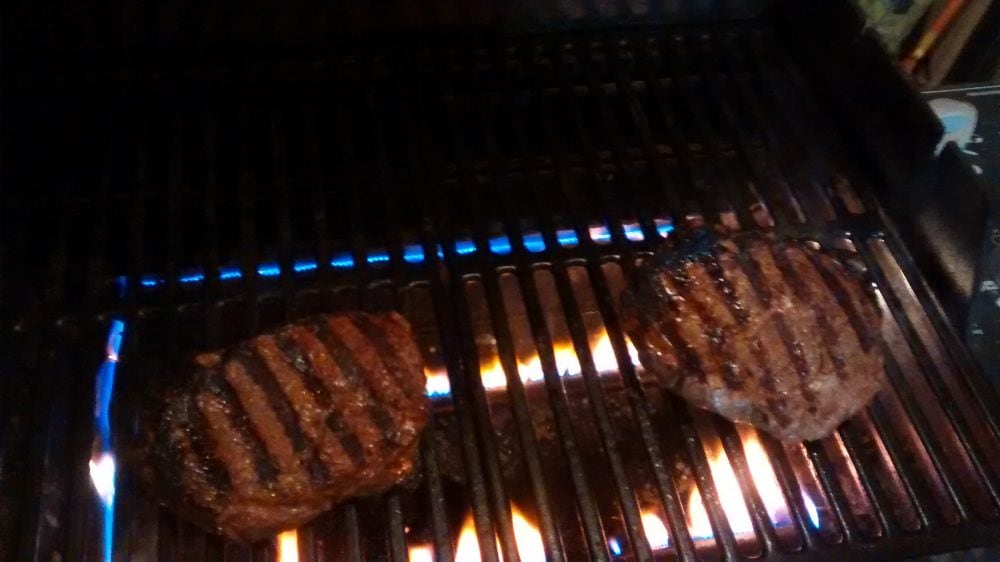 When firing up the grill this weekend, keep that old BBQ gun tradition in mind. (Photo: Chris Eger/Guns.com)

Originally a term for one’s “Sunday best” sidearm worn to social events in the Old West, the BBQ gun is something special.

While such guns were often embellished with exotic grips, jewels, and inlays, they were still very much functional if needed– a key point of contention. Besides these guns that only occasionally saw the light of day, many solid professionals of the era chose to carry ornamented guns every day that made a bold statement without even having to be “skinned” from the holster.

This practice even carried on well into the 20th Century with iconic lawmen. For instance, Texas Ranger Capt. Tom Hickman carried a pair of special-order Colt Single Action Armies complete with ruby inlays on carved ivory grips during the Prohibition era. Speaking of special-order Colts, no less a person than Gen. George S. Patton picked up a Colt SAA in El Paso while a young cavalry officer on the border– complete with engravings and ivory grips with a Volant eagle. 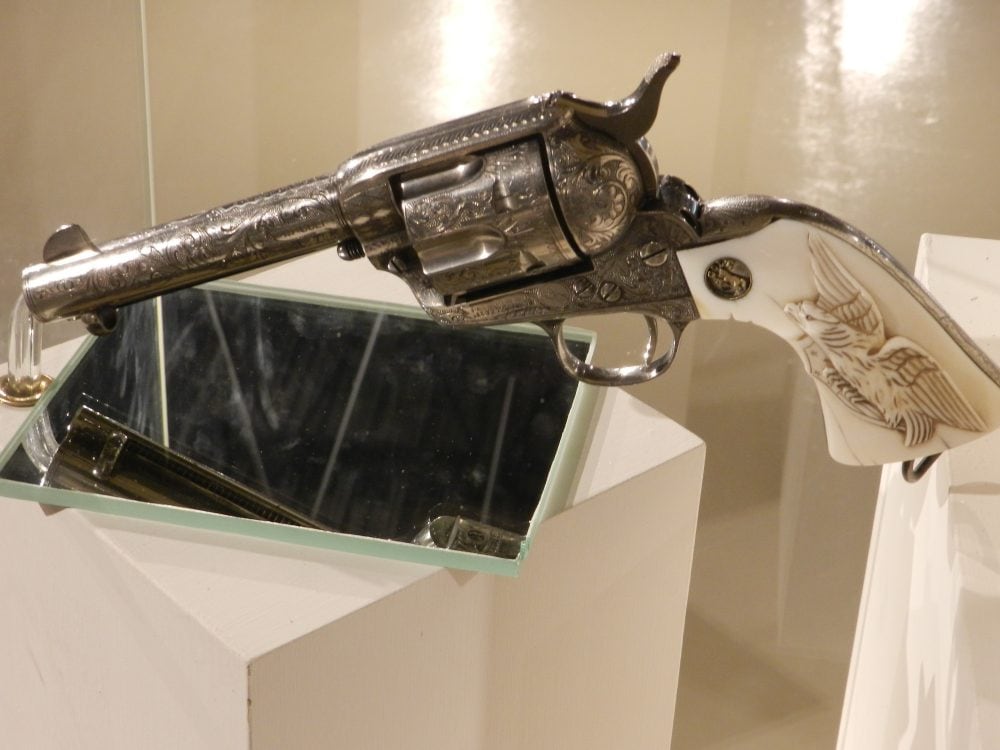 Gen. George Smith Patton Jr. carried a Colt SAA, a personal weapon, for much of his career, in an open-topped holster. It is now in the Army Museum System. (Photo: Chris Eger/Guns.com)

With that, let’s look at some of the certified pre-owned hog legs currently inside the Guns.com Vault that would seem at home in a tooled leather holster while the steaks are getting lightly done on the grill. 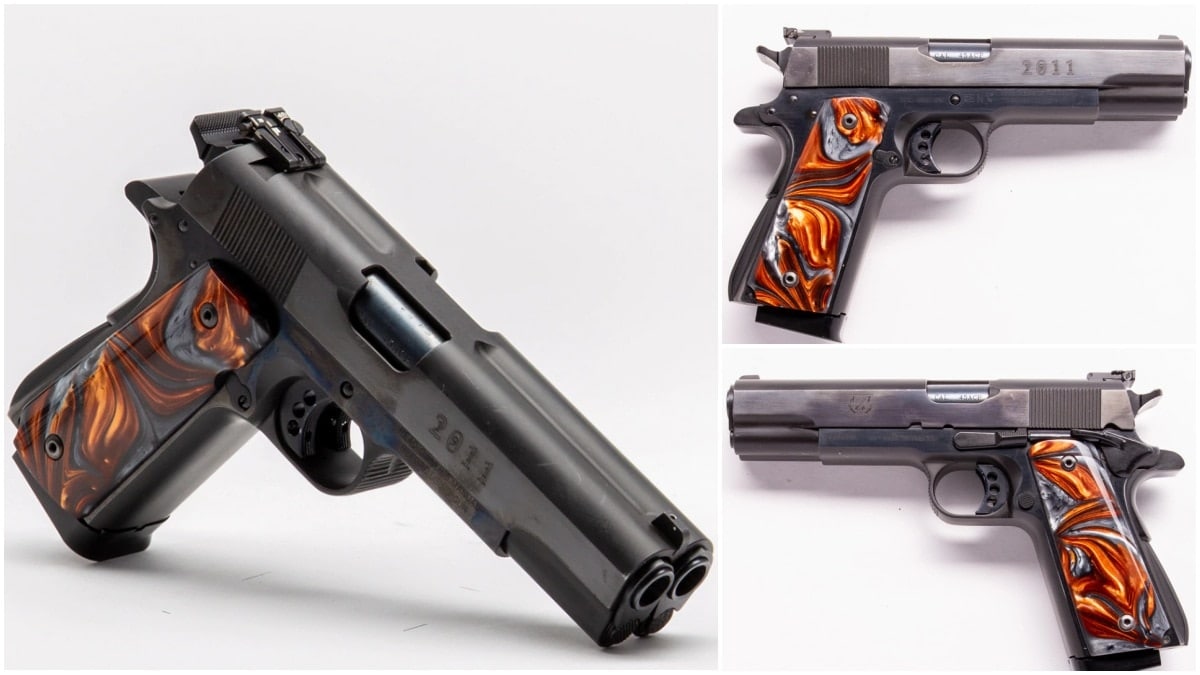 If a .45 makes a statement, a double-barreled AF-2011A1 almost demands a reaction via certified letter. 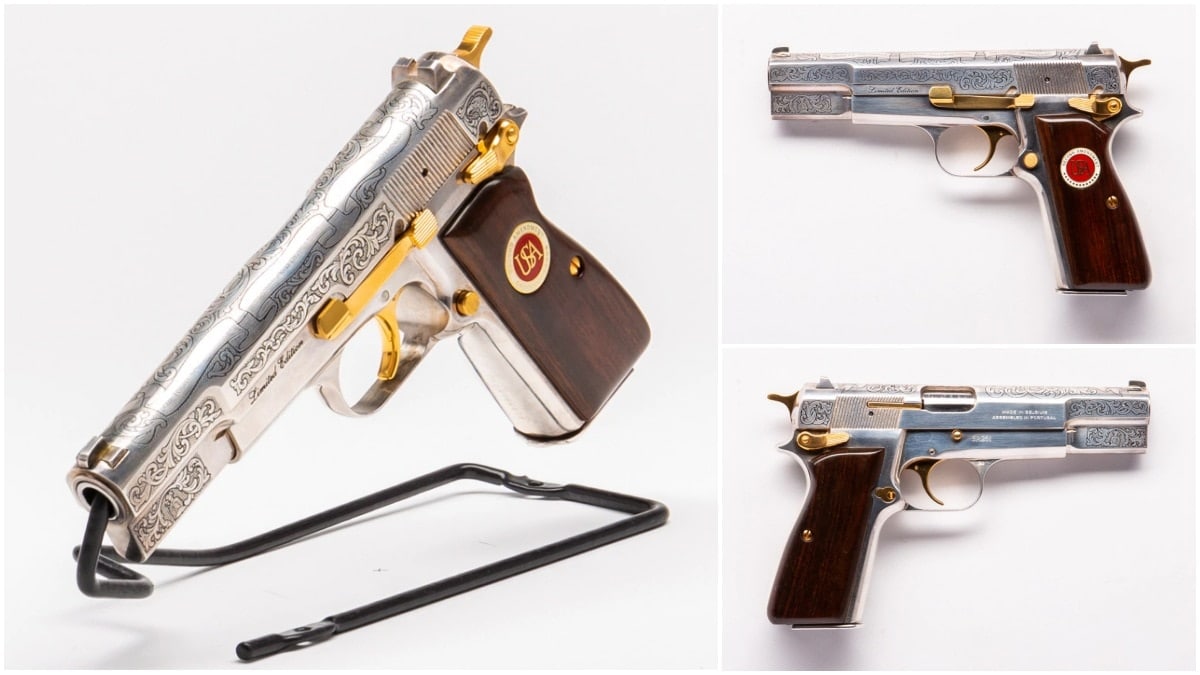 The Browning Hi-Power is a thing of beauty in any form and this one, a special edition 2A pistol in .40S&W, is interesting in its own right (get it?) The slide and frame are silver plated while trigger, hammer, magazine release, and many other parts are gold plated. A large section of the text of the Second Amendment is engraved into this pistol’s slide, along with an eagle, two minutemen, and lots of scrollwork.

THE SECOND AMENDMENT IN .40S&W VIA BROWNING, HERE 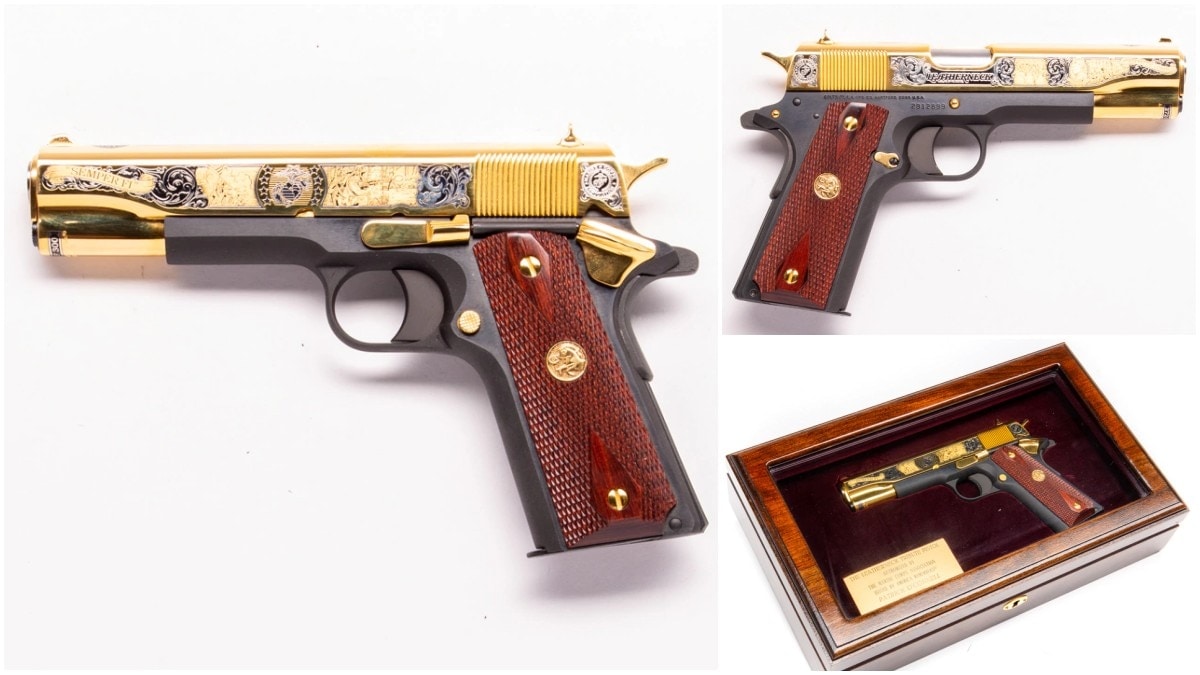 This Colt Government Model tribute pistol is decorated by craftsmen specifically commissioned by America Remembers and is the first-ever issue authorized by the Marine Corps Association. The back-to-back World War Winner is covered with a variety of scenery and scrollwork paying tribute to the heroic contributions of those who have served in the United States Marine Corps including the EGA, a trench warfare scene the Battle of Belleau Wood and a portrait of Maj. Gen. John A. Lejeune.

SEE THE FULL DETAILS ON THIS TRIBUTE PISTOL NOW 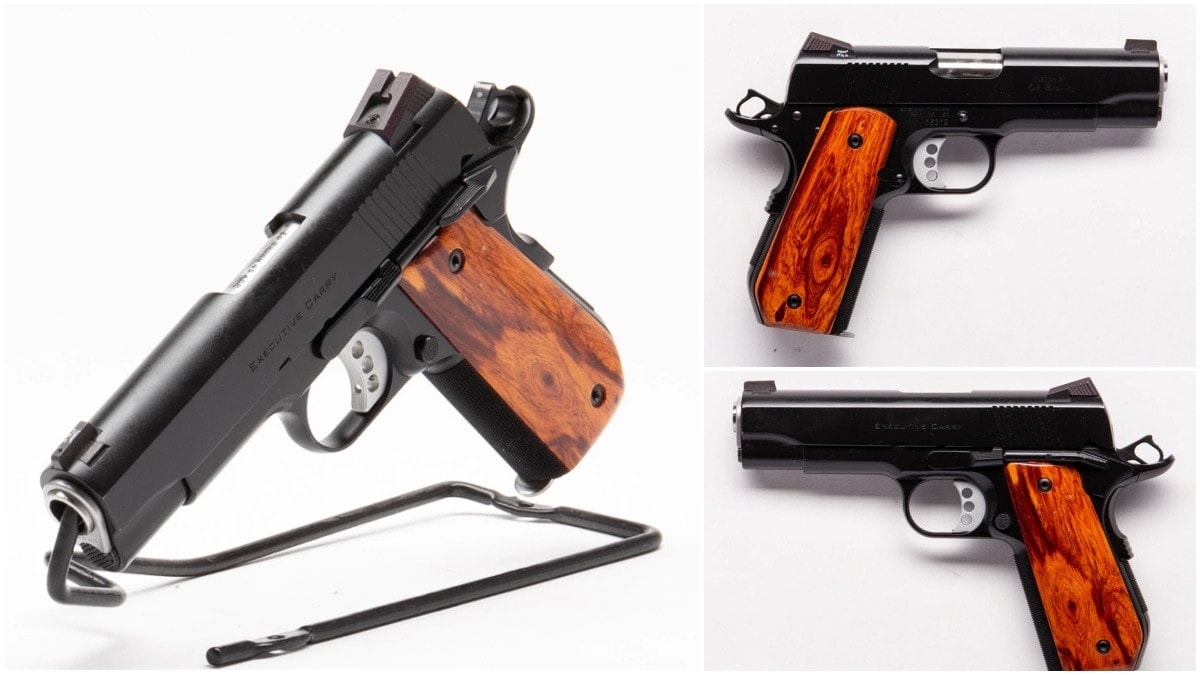 While lacking in scrollwork, this Ed Brown Executive Carry is breathtaking to include Cocobolo grips, skeletonized hammer and trigger, and a 25 LPI checkered front strap and mainspring housing.

WHAT THE BOSS WEARS TO THE BBQ, ONE CLICK AWAY 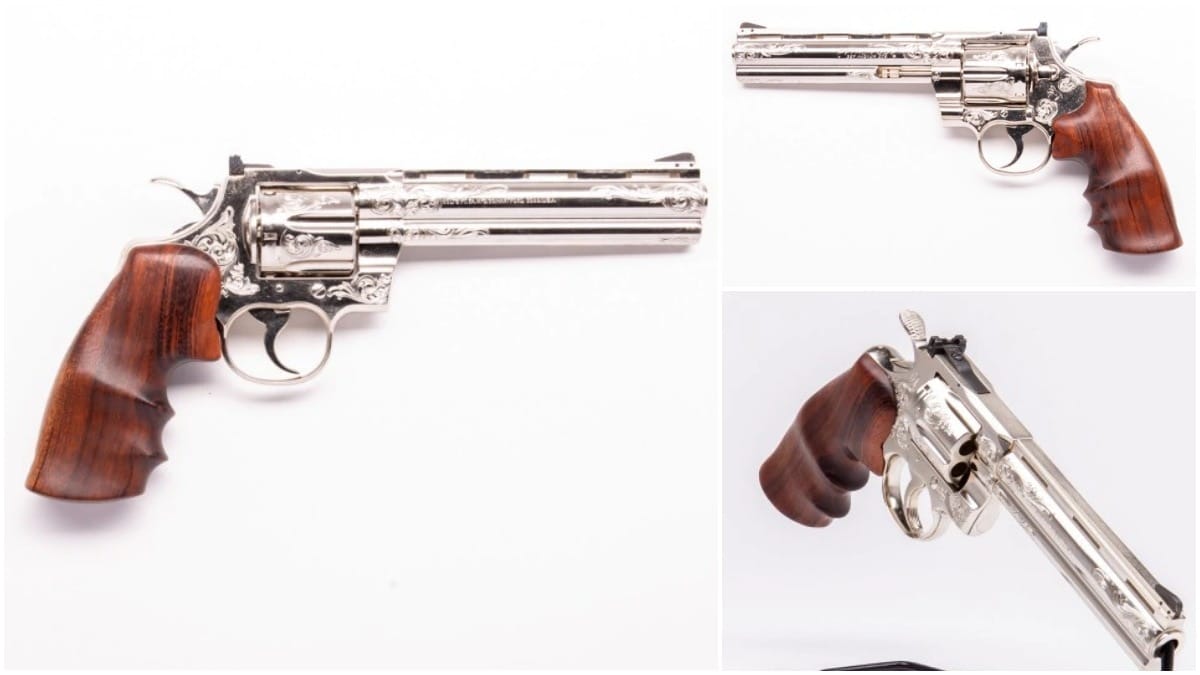 The Cadillac of wheel guns, Colt’s Python is about as iconic as it gets when it comes to modern .357 Magnum revolvers. This one was born in 1978 and features detailed engraved scrollwork reaching from the back of the frame to the end of the 6-inch barrel 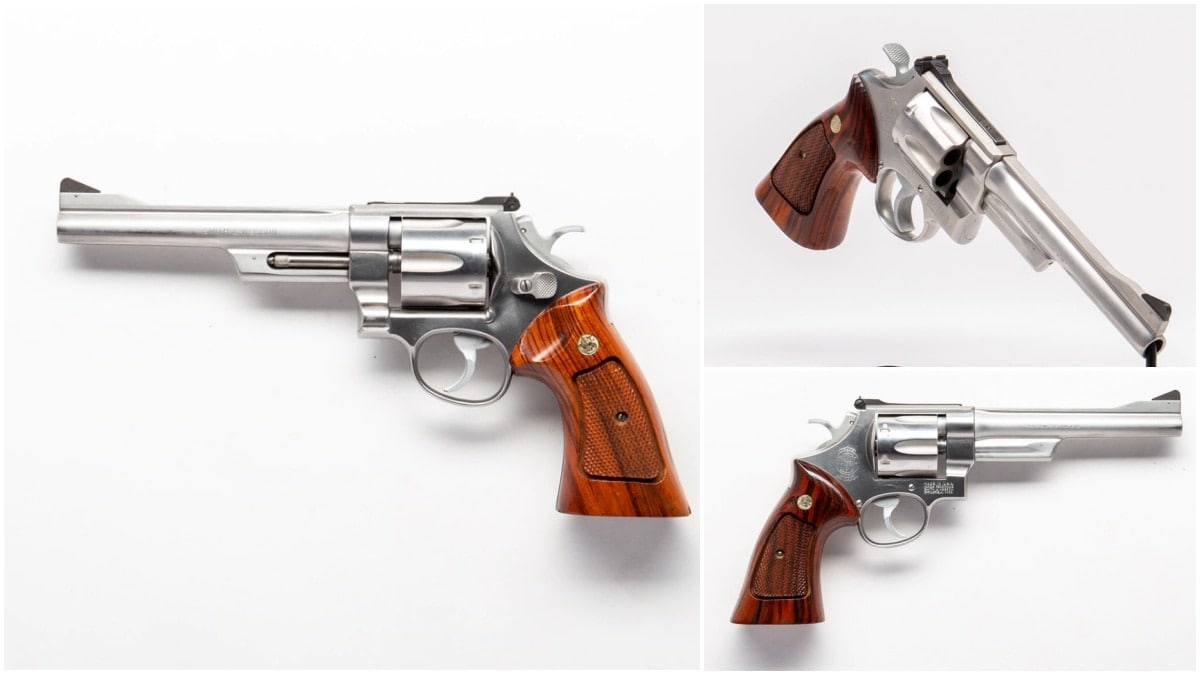 This sleeping beauty is a Smith & Wesson Model 624, a fine target revolver with a 6-inch barrel made for a short run in the 1980s by Big Blue, chambered in curious but commanding .44 Special. You don’t run across these every day, making this a BBQ gun with presence and an interesting back story to boot. 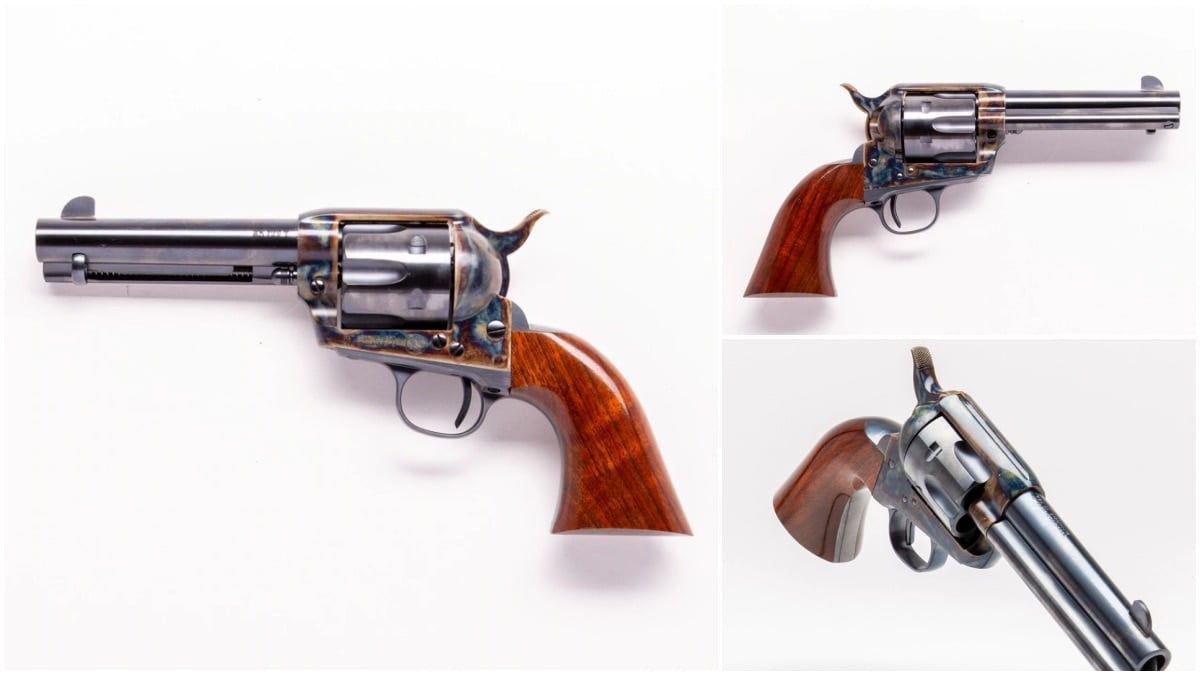 Something that would be familiar with the old-timers at those BBQs of yesteryear would be a nice Single Action Army and this one by Doug Turnbull has a frame that is case hardened while the cylinder and barrel are blued steel. Highly polished wooden grips offer a handsome contrast against the metal of the rest of this revolver.

YES, THAT TURNBULL SAA COMES IN .45 COLT, GET IT NOW 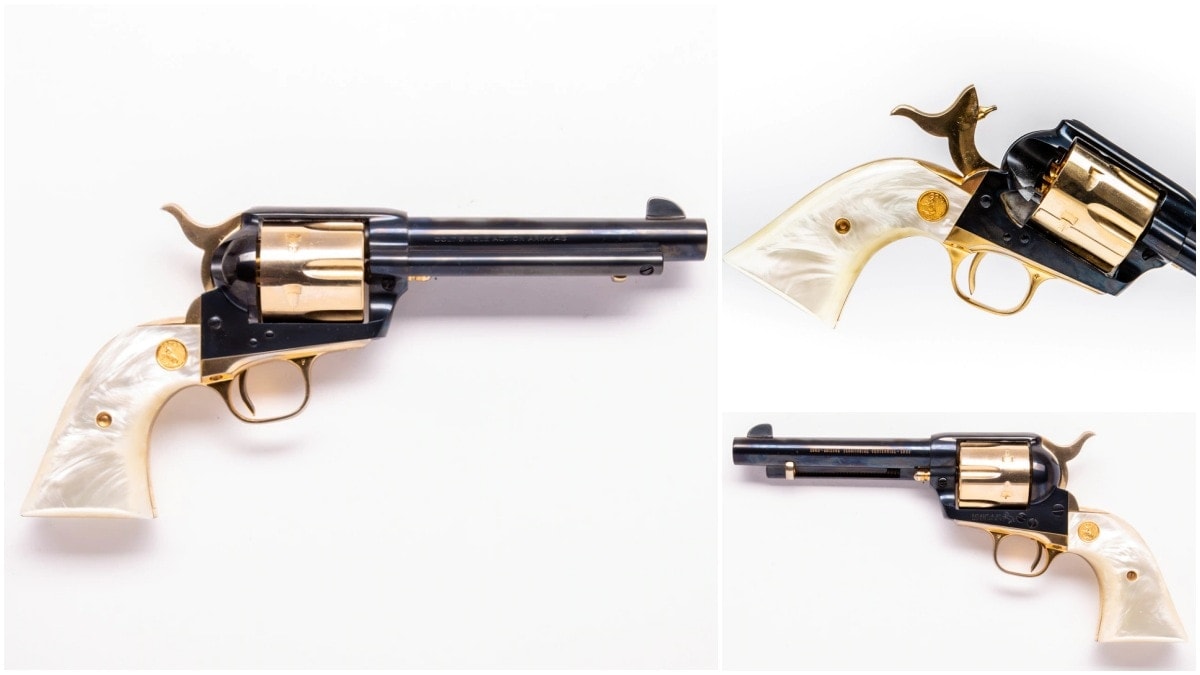 If the Turnbull lacked pizzazz for you, how about this commemorative Colt Arizona Territorial Centennial, crafted for the 1963 100th anniversary of the Arizona Territory? Gold plated parts, mother of pearl grips and a wooden display case included at no additional charge.

PUT THAT ARIZONA COLT IN YOUR SHOPPING CART 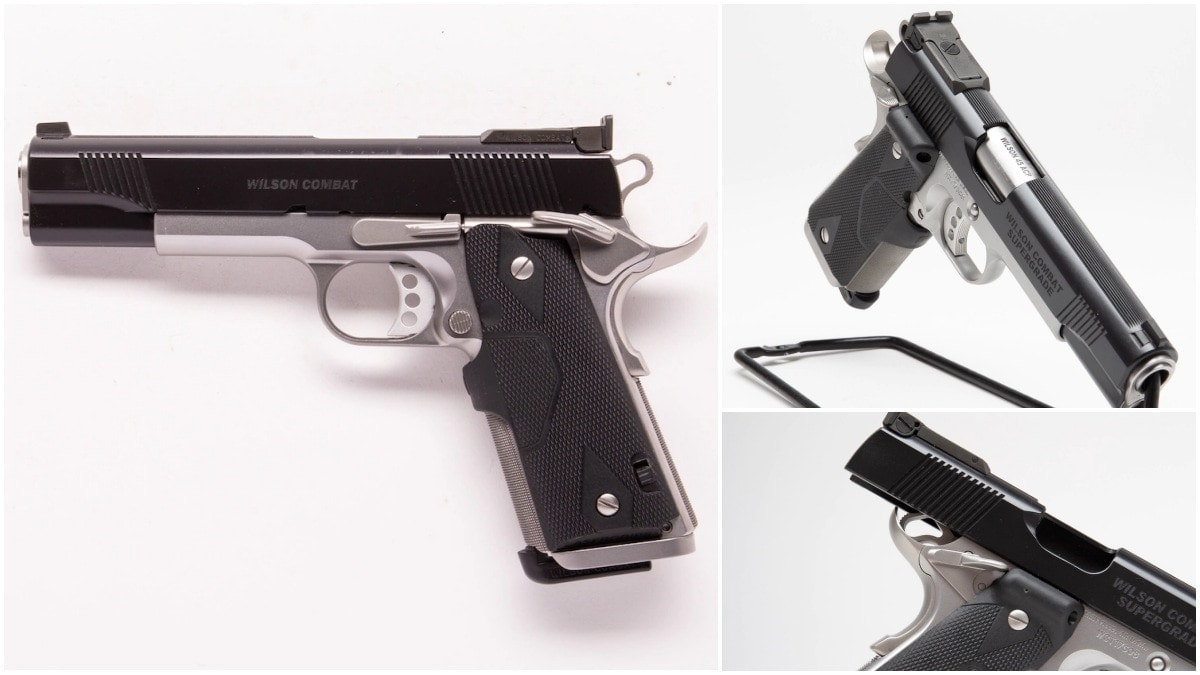 Beauty is in the eye of the beholder and this Super Grade by Wilson Combat is an eyeful for fans of upper shelf 1911s. Production of the Supergrade is limited to just a handful of pistols a month, making this top-of-the-line pistol an instant collector’s item. This package includes six eight-round magazines from Wilson Combat, the original case, and a holster.

DID WE MENTION IT COMES WITH SIX MAGS? 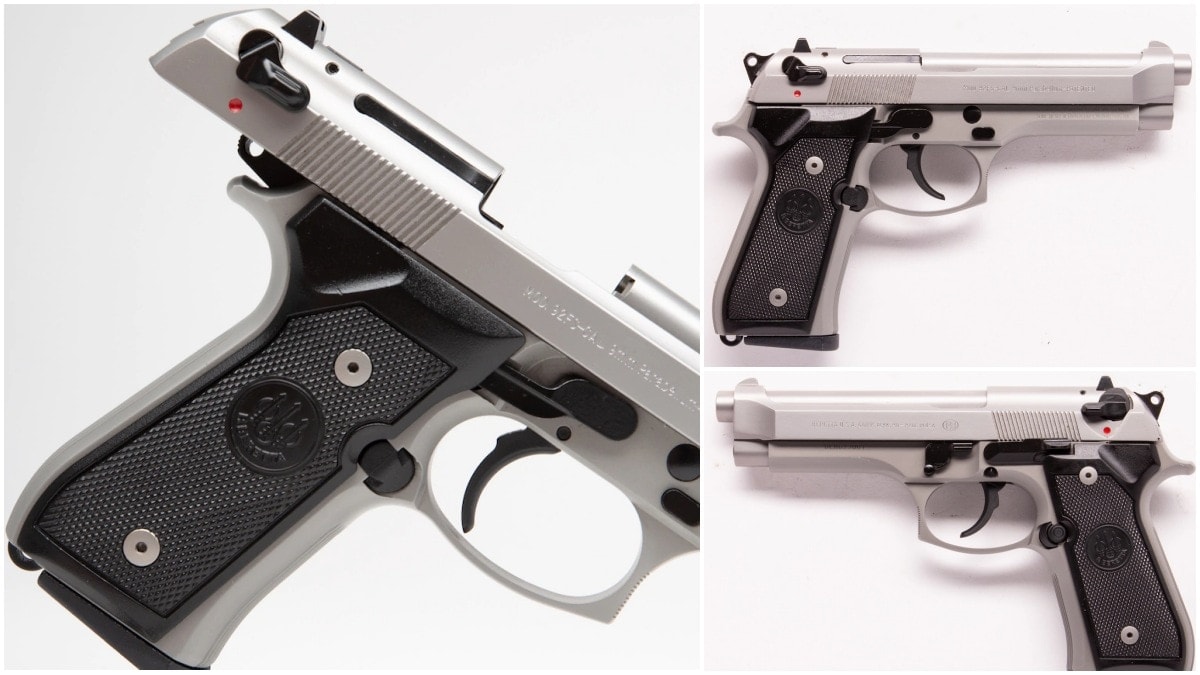 We couldn’t mention upscale 1911s without at least dropping one Beretta 92 in the mix, after all, it did win both Gulf Wars. This is not your average GI M9 though as the Inox series hits the high notes when it comes to finish. Secret: it is also one of the most affordable BBQ guns you can get!

BACK TO BACK GULF WAR CHAMP!

No matter what you choose, are how you choose it, be safe and have a happy Labor Day Weekend from the crew at Guns.com!