Armalite Run Down: Just why was it the AR-15? What does AR even stand for?

Sure, everyone has heard of the AR-15, the most popular rifle in America, but what about the Armalite AR-1 or AR-17? There are a few interesting stories there.

The “AR” in each case does not stand for “assault rifle” as those who are uninformed often think. It is, in fact, short for Armalite, the firearms company that employed a generation of incredible forward-thinking gun designers, engineers, and inventors.

Established in the early 1950s as a division of the Fairchild Airplane Corporation, the latter perhaps most famous today for their A-10 Warthog tank buster attack plane, Armalite leveraged aviation industry’s advances and applied them to firearms. Their engineers registered some of the first firearm patents incorporating foamed plastics in both stocks and handguards, aluminum receivers, self-lubricating alloy gun barrels, folding synthetic buttstocks, and other developments. 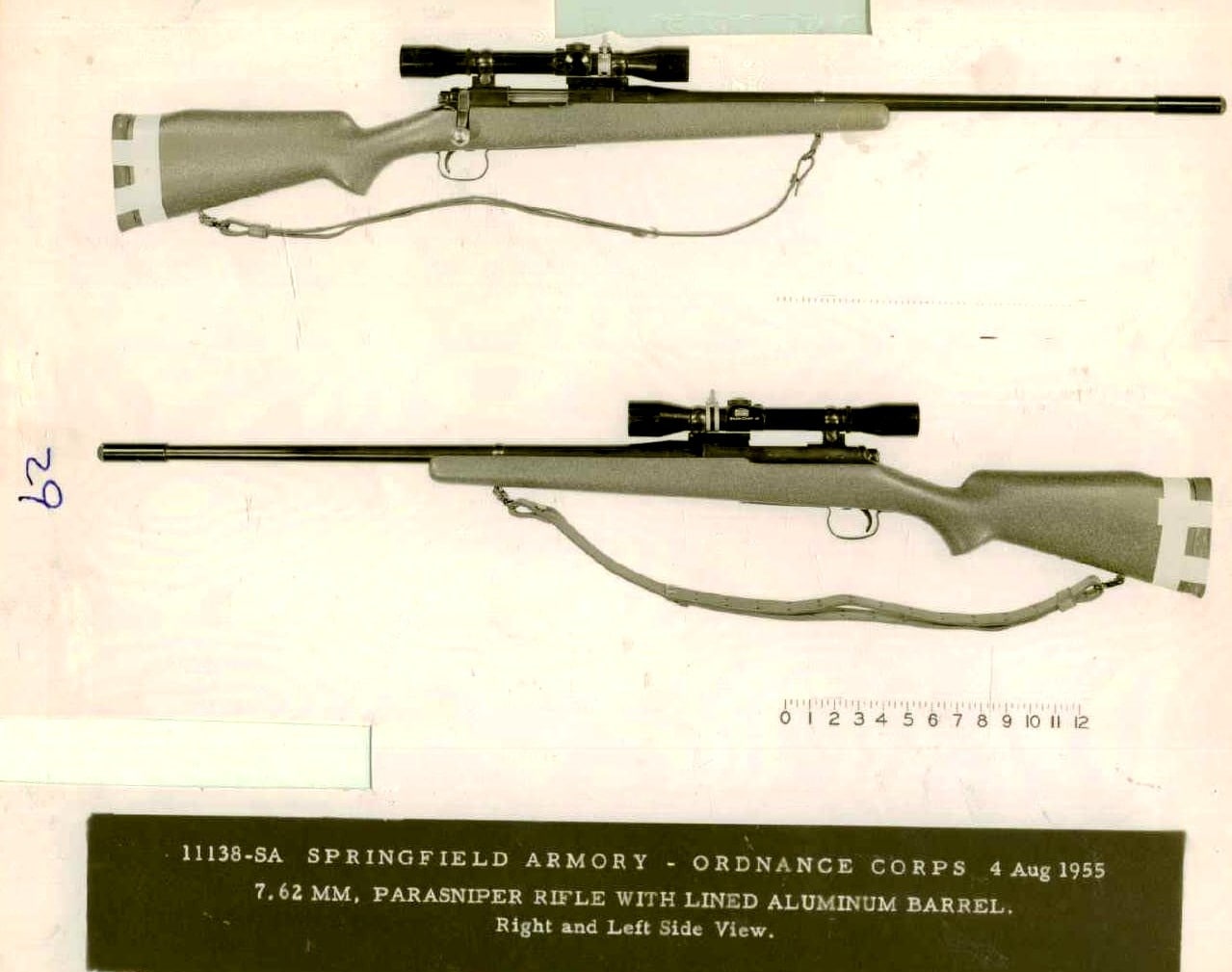 According to Springfield Armory National Historic Site, which has four of these rare rifles in their collection, the Parasniper was what today would be called a “Mountain” rifle that used an early foam-filled fiberglass stock and other weight-saving means to trim pounds.

Using a steel-lined aluminum alloy barrel, the Mauser type receiver was chambered in the commercial .308 Winchester caliber. While the 5-pound scoped rifle was tested by the Army at Aberdeen Proving Ground in 1955, it was never adopted and faded into history. Interestingly, Parasnipers made during this period were produced at Armalite’s Hollywood, California plant. 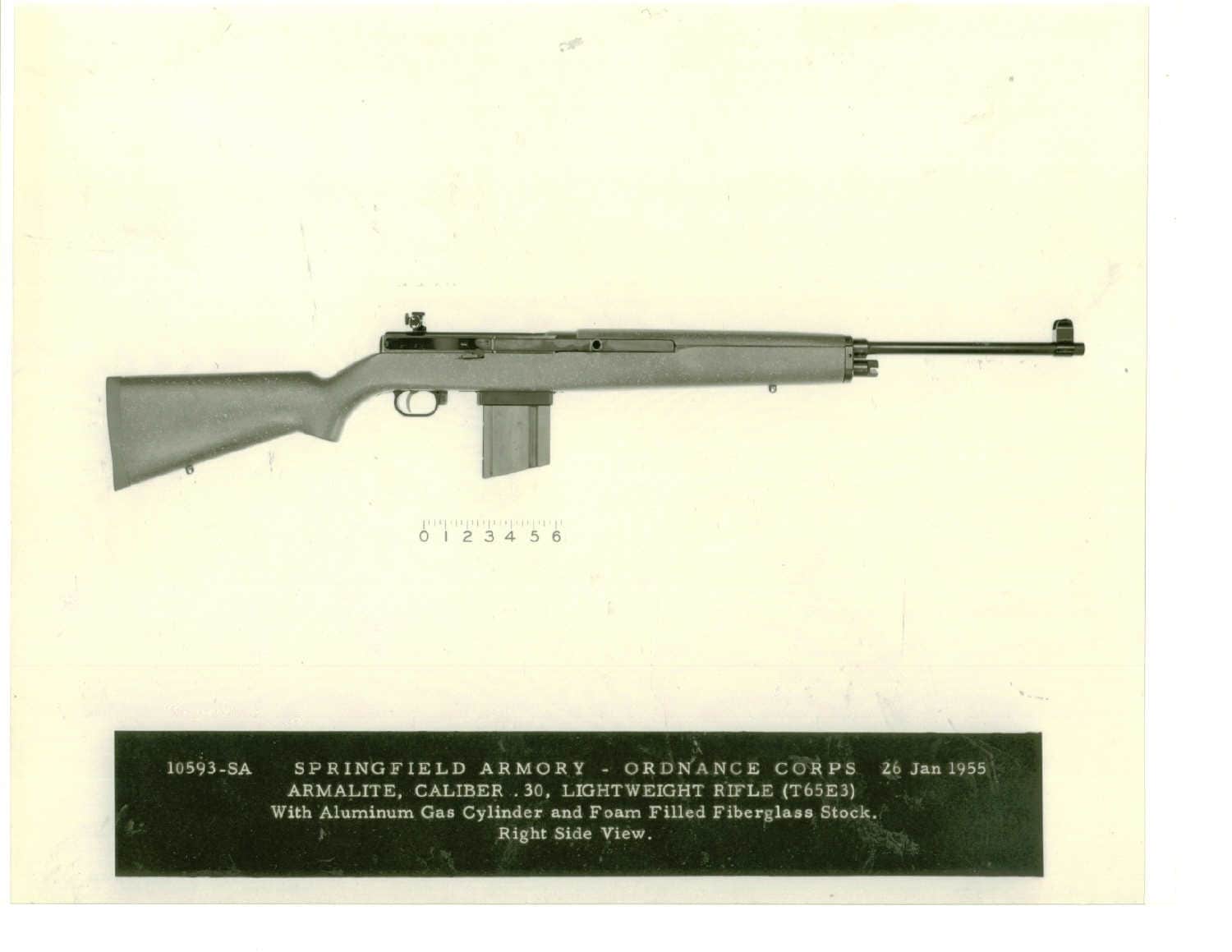 Another “lost” Armalite is the prototype select-fire battle rifle designed by the company to fire the then-experimental T65E3 cartridge, which became the 7.62 NATO. Similarly, Springfield Armory was testing the T44 and T48 rifles in the same caliber, as a potential replacement for the M1 Garand. The T44 and T48 grew up to become the U.S. M14 and FN FAL, respectively. Tough competition.

A smaller version of the rifle, chambered in .222 Remington, was prototyped as the AR-11 and likewise never made it to production. The AR-12 had much the same story, never leaving the drawing board.

A bolt-action rifle, the AR-5 was chambered in .22 Hornet to replace the U.S. Air Force’s stockpiles of H&R-made bolt-action aircrew survival rifles. To conserve space and weight, the gun had a hollow plastic stock that the takedown barrel could be stored in and, best yet, the whole thing could float. While the USAF reportedly liked it, the AR-5 was not adopted. This design was reworked for the commercial market and found much more success as the…

Henry Arms’ U.S. Survival is the current production version of the old AR-7 Explorer. In the 1960s, its modern styling was instrumental in the little popgun finding its way into at least three James Bond movies and the TV spy comedy Get Smart before showing up in Buck Rogers in the 1970s (Photo: Guns.com)

Taking the general concept of the AR-5 and applying it to a semi-auto chambered in .22LR with a steel-lined 16-inch aluminum barrel, the AR-7 Explorer was born in 1959, at the same time as Remington’s Nylon 66, and proved Armalite’s first commercial success, being produced by the company until 1973. Since then, it was made by Charter Arms, Survival Arms, and others, with New Jersey-based Henry Arms producing it as their U.S. Survival rifle since 1998.

Showing that not all ARs are rifles, Armalite worked on the AR-9, a very lightweight — 5.5-pound — semi-auto shotgun with foam-filled plastic furniture and a high-strength aluminum receiver and barrel.

This later became the AR-17, which entered production in 1964 and only sold about 2,000 examples during its short two-year run, making it a sought-after collector’s item today. Curiously, it was marketed in not only a basic black finish but also a gold one as well. 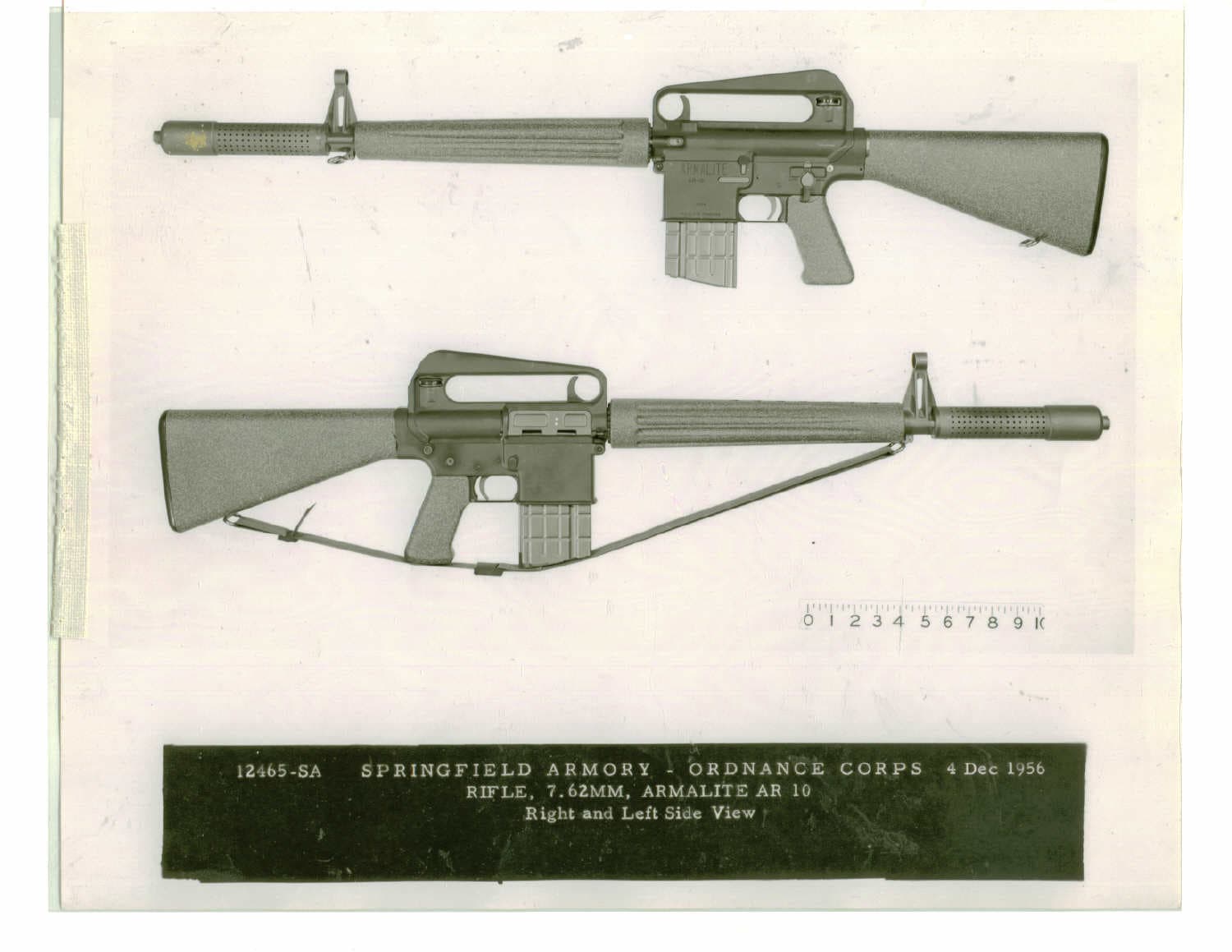 Learning lessons from their earlier attempt at a battle rifle in the AR-3/AR-11/AR-12, Armalite came up with the rifle that became the AR-10 around 1955 and was soon submitting it to the Army for testing. Using a top-mounted carrying handle on the upper receiver that held a rear sight, the 7.62 NATO-caliber select-fire beauty, like Armalite’s previous designs, contained lots of aluminum and plastics, and was one of the first such designs considered seriously by the military for adoption. It made a big difference as the gun was more than 3-pounds lighter than the M1 Garand while having the capability of firing at 600 rounds per minute in its select-fire mode.

In the end, the AR-10 was not adopted by Uncle Sam, who went with Springfield Armory’s in-house developed M14 in 1957, but the gun, licensed to Dutch arms maker AI, was adopted in small numbers by Portugal, Sudan, and even KLM Airlines!

In its later (post-1980s) redesigned semi-auto format that is actually more of an upsized AR-15, the updated AR-10 thrives on the commercial market today by Armalite while clones along the same line such as the Smith & Wesson M&P 10, Anderson AM-10, Windham Weaponry SRC, and Daniel Defense DD5, carry on the legacy on their own. 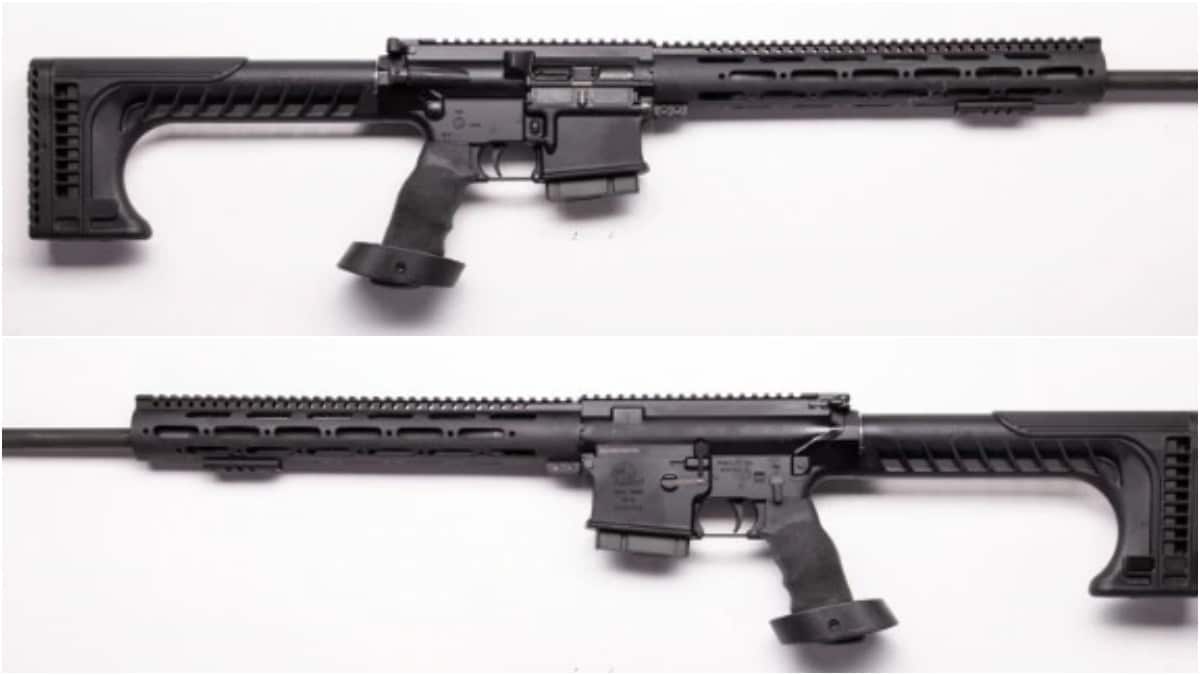 This particular Armalite AR-10 in the Guns.com Vault is chambered not in .308 but .243 Win, a round incredibly popular with hunters. (Photo: Guns.com)

The AR-13 and AR-14 were both wildly different prototypes from all the other Armalites, the first reportedly an early multi-barreled aircraft gun, the second a semi-auto rifle in hunting calibers. This brings us to the… 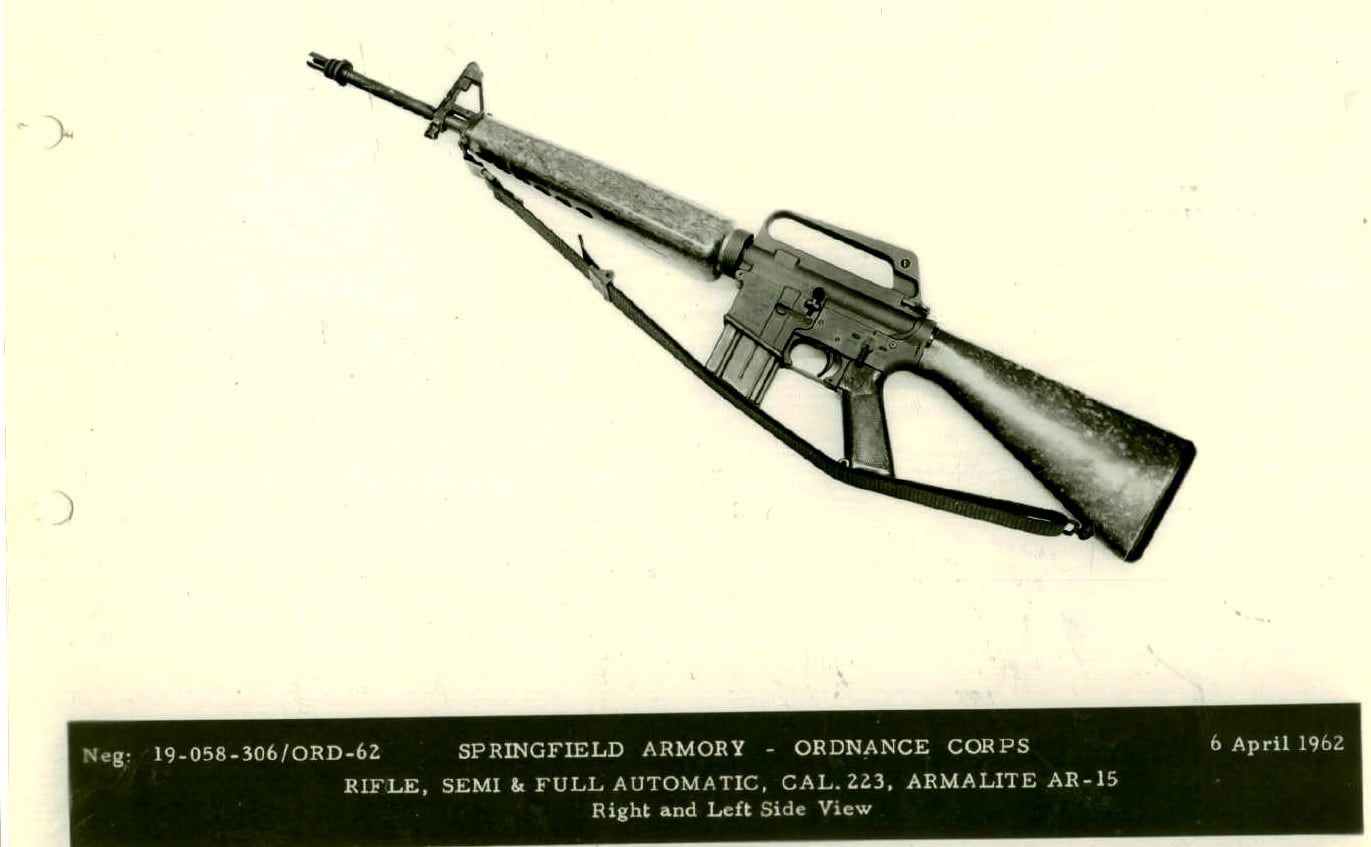 Check Out Colt Rifles For Sale

Scaling down the AR-10 to use the 5.56mm NATO round, Armalite’s AR-15 proved a slam dunk winner– for Colt– as Armalite sold off the design to the Connecticut-based company in 1959 who soon successfully pitched it to the U.S. Air Force for use with Security Police guarding bases. Within a few years, it had been adopted by the entire U.S. military and saw extensive service in Vietnam. 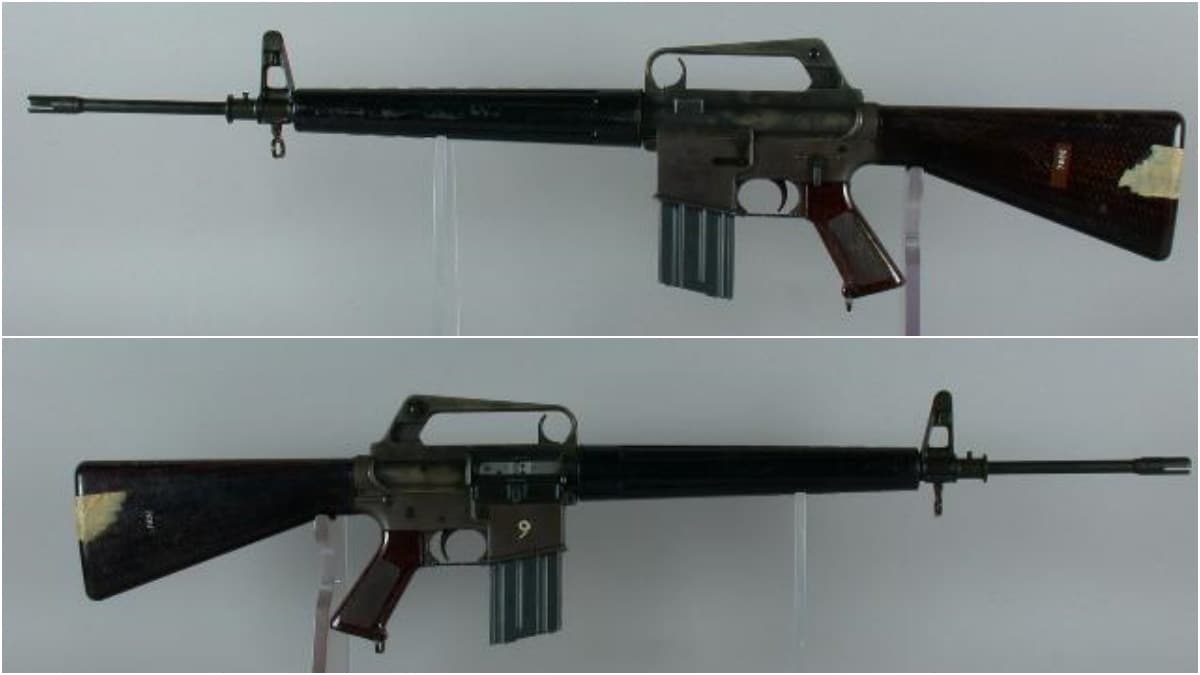 This early circa-1958 Hollywood-marked Armalite AR-15 in the Springfield Armory collection still has a top-mounted charging handle and thin AR-10-style handguards. Also, note the original design sans the forward assist. The gun competed against the Winchester .224 Light-Weight Military Rifle (WLAR) in Army tests, with .223 at the time being referred to as .222 Remington Super, but was unsuccessful, triggering Armalite to sell the design to Colt who then successfully pitched it to the Air Force. (Photo: Springfield Armory National Historic Site) 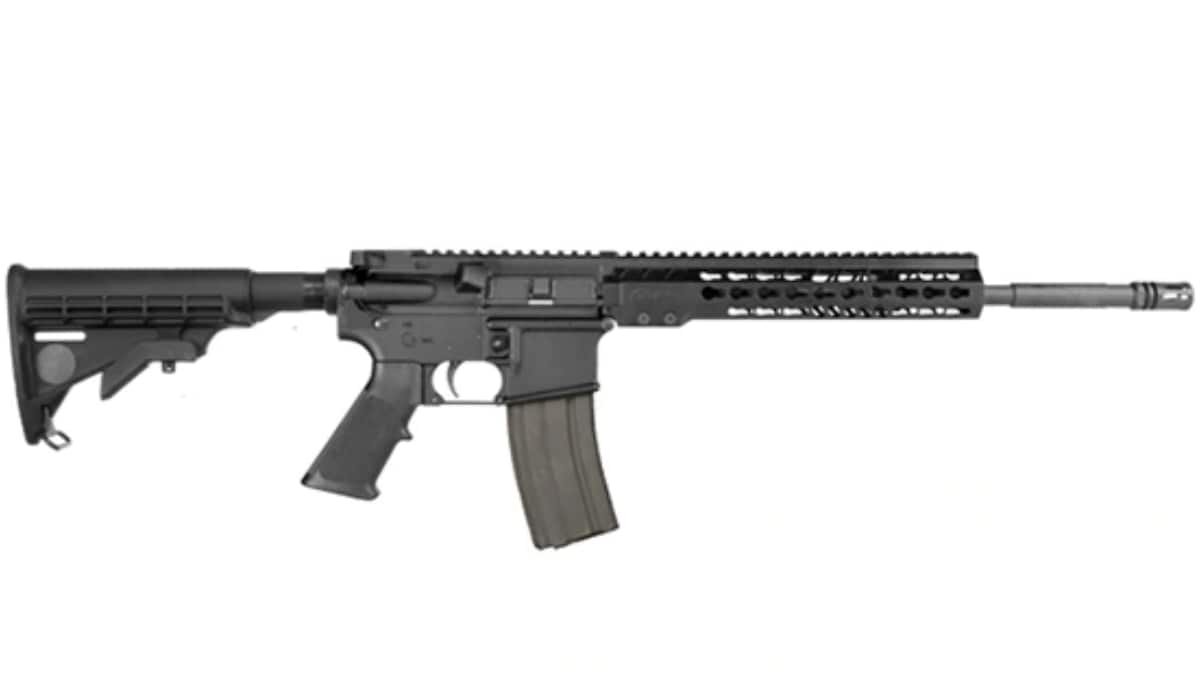 The current Armalite M-15 line is a more updated version of the original AR-15. (Photo: Guns.com)

Today, Colt still produces the AR-15 and follow-on M16 and M4 series rifles in several variants for both the military (select-fire) and consumer (semi-auto) markets. As for Armalite, they went to the M-15 name for their AR-15 pattern rifles in recent years. 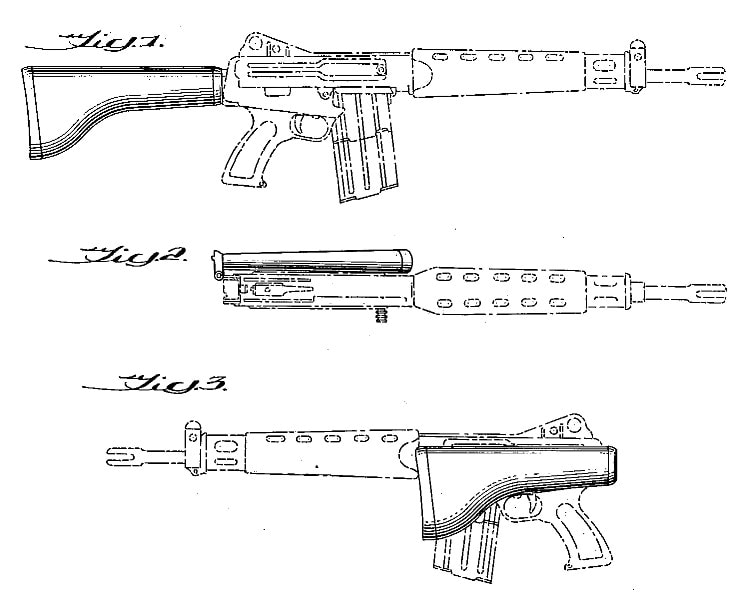 With most of the trade secrets that made the AR-15 so novel going to Colt and from there largely into the public domain, Armalite began work on a new 7.62 NATO battle rifle with a stamped receiver.

Rather than the AR-15’s buttstock buffer spring, the AR-16 used a twin pair of action springs to eat up recoil and a short-stroke gas piston action with an operating rod over the barrel and a rotating bolt. This, in turn, allowed a folding stock. While the AR-16 was not successful and never made it past low-level prototype runs, its design, rechambered for 5.56, went to live on as the… 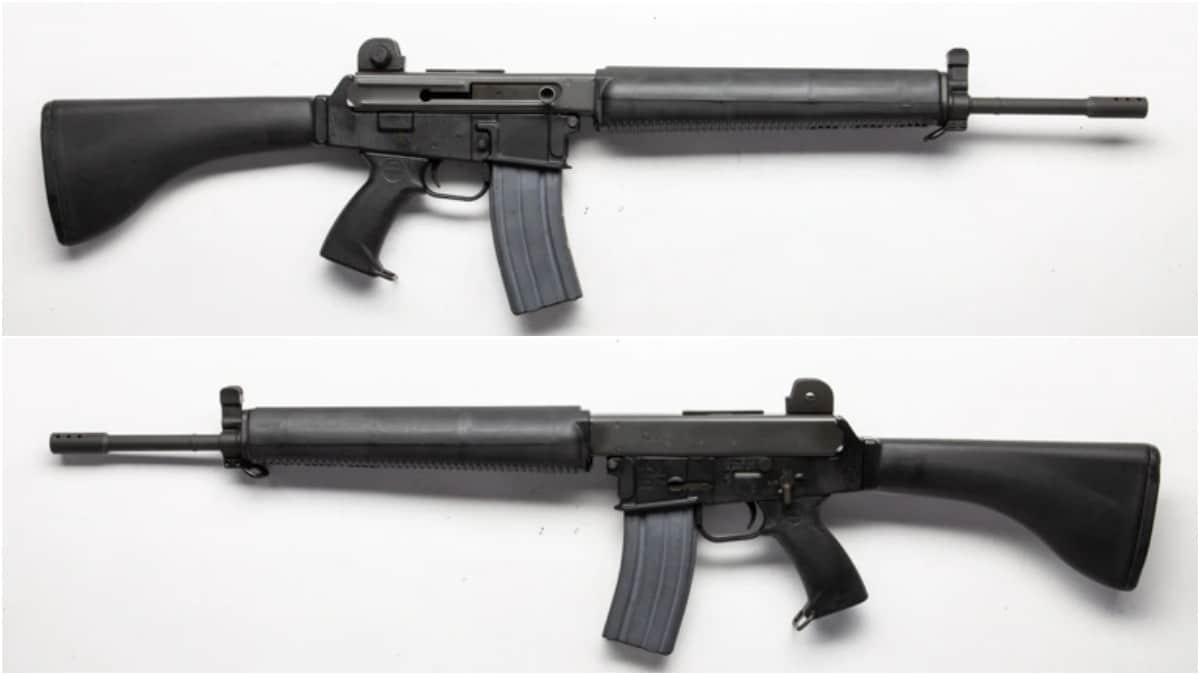 Using groundwork from the unproduced AR-16 with lots of engineering from Arthur Miller and others, the AR-18 was chambered in 5.56 NATO and (stop us if you have heard this before) was unsuccessfully pitched to the U.S. Army as a new infantry rifle. Like with their previous AR-10, the AR-18 was licensed to overseas gun makers such as Howa in Japan and Sterling in the UK while the company, still based in California, also licensed production of semi-auto AR-180 variants and, after the company was rebooted, the polymer-receiver AR-180B.

The original Armalite went belly up in 1983, with its parts and machinery being exported to the Philippines where the AR-18 was to be produced, although that plan did not ultimately pan out. Rebooted in the U.S. in 1995 by Eagle Arms, the current Armalite is based in Illinois and produces not only the M-15 series ARs, and AR-10 variants but also the AR-31 (.308 Win) and AR-50 (.50 BMG) bolt action rifles.