Gear You Need to Become the Ultimate 3-Gunner

Though multi-gun matches have circulated within the competitive circuit since the 1970s, 3-Gun, as it’s known today, came a little later. Due in part to the prevalence of 3Gun Nation shows and well-stocked prized tables at national matches, the sport’s popularity has skyrocketed in recent years. As more and more interest surfaces around 3-Gun matches, many gun owners question what gear is needed to become the ultimate 3-Gun shooter.

Guns.com reached out to top professionals in the field — renowned firearms instructor and competitor Ernest Langdon and accomplished 3-Gun champion shooter Pierre LeClair — to pick their brains on what it takes to become successful in the 3-Gun sport. 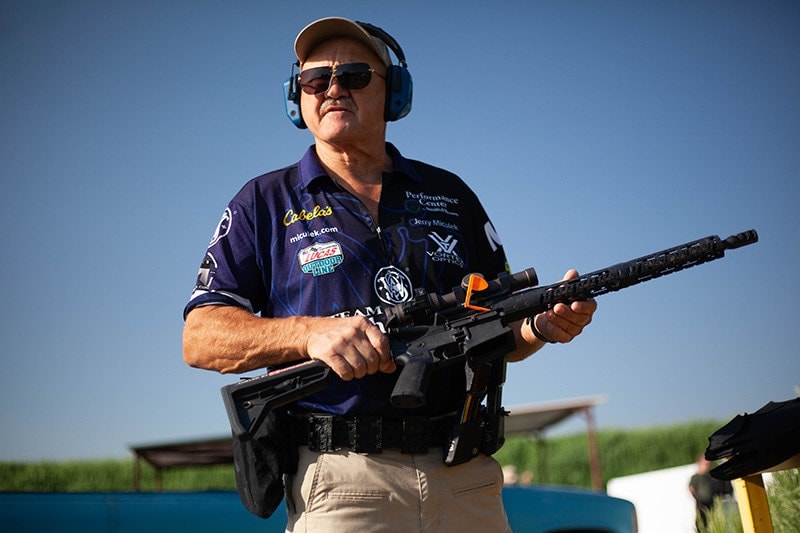 3-Gunners don’t have to spring for custom-built guns. Jerry Miculek, one of the top competitive shooters in the world, uses his Smith & Wesson M&P15 to compete in 3-Gun matches. (Photo: Jacki Billings/Guns.com)

Before diving into gear, one sentiment competitors agree on is the importance of reliable firearms. Though gun owners don’t need to spend a small fortune on firearms for competition, quality does come at a price. Budgeting for the best firearm your budget will allow is the best approach.

LeClair suggested focusing on the quality of the barrel when buying a rifle intended for competition. “Nowadays everyone wants the latest lightweight AR or the coolest looking paint job, but they overlook the most important component of a 3-Gun rifle build- the barrel,” he said. “At the end of the day, if you can’t hit your target, you’re barking up the wrong tree. Whether building your own or buying a complete rifle for 3-Gun, make sure it has a quality barrel.”

Though some competitors prefer custom builds, especially for handguns, 3-Gunners say any standard Glock or Smith & Wesson will do the job. LeClair clarified shooters should opt for the pistol that they, as individuals, shoot well – not what others prefer. “Don’t get caught up thinking you need a $3,000 to $5,000 pistol to be competitive in 3-Gun,” LeClair explained. “If you’ve always shot Glocks and you feel the most confident with a Glock, then shoot a Glock. A reliable pistol that you have confidence in will be the best pistol for you to use in 3-Gun and it will show in your results!” 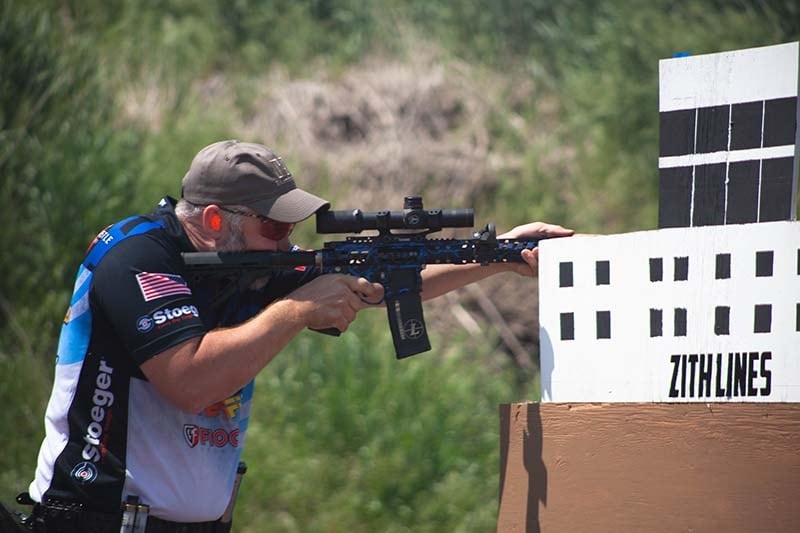 A rifle is only as good as the optic, therefore 3-Gunners should work towards a proven design. Optics will depend on the division in which gunners opt to shoot; but having an optic that can tackle targets from a few feet away, all the way to 500-yards will yield the best results. “The current market is saturated with excellent glass at great values. Find the optic that fits your needs and budget and get the most out of your AR,” LeClair commented. First focal plane scopes, like the Leupold Mark 6, are often easier to work with under pressure but if that’s out of reach, gun owners should opt for an optic with a variable range of 1-6X or 8X and an illuminated dot at 1X power is a must-have.

LeClair said shooters competition optics endure continued abuse as they are tossed into barrels and knocked against barricades, but decent optics should still engage targets from 10 to 600-yards without losing zero. While we’re on the topic of optics, it’s also wise to stock a scope cleaning kit in your range bag. Langdon says it’s easy to get dirt and grime on the lens. If you’ve invested in a good scope, invest in a cleaning kit to keep it in tip-top condition. 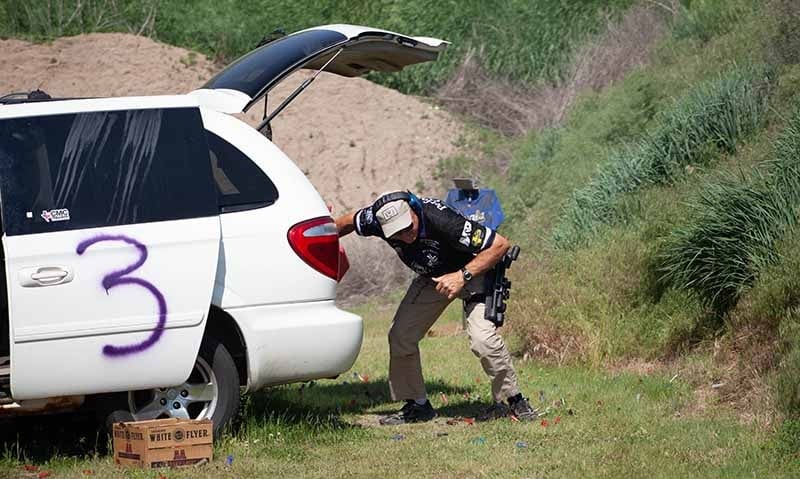 When it comes to selecting a holster for 3-Gun matches, retention is key. Competitors often meet rigorous, physical courses of fire. Obstacles include running through the forest, crawling through tunnels and shooting in awkward positions. Solid retention is key to prevent the pistol from falling from the holster during a stage. If the pistol leaves the holster before the pre-determined point during the course of fire, it’s an automatic disqualification. Invest in a solid holster that retains the pistol in place until you need it.

Outfitting good guns with the right accessories help push firearms to their max potential. Though every competitors’ build is slightly different and customized to their own preferences, there are some basics that apply across the board.

Access to multiple compensators, buffers and buffer springs as well as throwing on an adjustable gas block for rifles ensures that shooters can tune the rifle to flatten the recoil profile. This allows for quicker follow-up shots on targets. For shotguns, a simple add-on like chokes ranks highly on the list of gear to focus. Access to multiple choke tubes means the difference between hitting a target and missing.

Ammunition and spare magazines with extensions are also suggested as top gear to focus on. Though Langdon said birdshot and slugs are preferred for most matches, having heavier loads proves useful. “You will need birdshot and slugs for most 3-gun matches, but it may also be a good idea to have a few heavy loads in your bag just in case. I have been to matches where the light birdshot was just not knocking over steel targets that were placed out at distance.” Additionally, each competition shooter should stock their range bag with plenty of reliable magazines and shotgun shell caddies to use during the match.

FIND YOUR NEXT COMPETITION SHOTGUN HERE 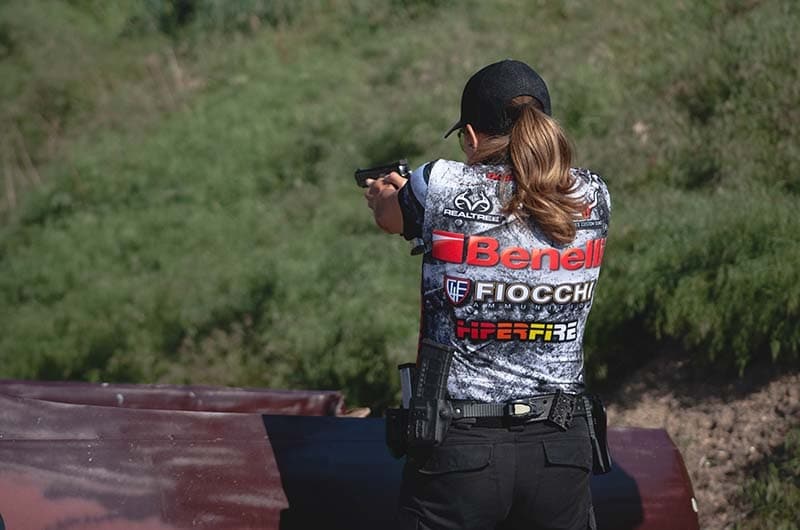 A quality belt, good holsters and mag pouches keep everything where it should be. (Photo: Jacki Billings/Guns.com)

An afterthought for most shooters, clothing also plays an important part in competition success. Competitors should select a modular belt system, be that a web belt or inner-outer belt system, to carry the weight of gear. A holstered pistol, spare mags and shotgun shell caddies on a flimsy belt will not only prove uncomfortable but could also cause gear to flop around during movement. Invest in a good, gun belt built for competition.

Additionally, shoes with aggressive traction offer the best foot in uneven, muddy or wet terrain. LeClair explained that shoes are often the most overlooked pieces of gear but, like race cars, traction is needed in order to deliver power and speed. Trail running shoes and soft style cleats tend to work best for 3-Gun matches.

Other items to consider in the way of apparel are gloves, knee pads and elbow pads.

Though the list of what each competitor stocks varies based on their needs, having a few quality basics like optics, holsters, and accessories will help produce more successful runs for potential 3-Gunners.

If you’re ready to jump into competition, make sure to check out Guns.com’s inventory of new and used rifles, shotguns and pistols to get you started.