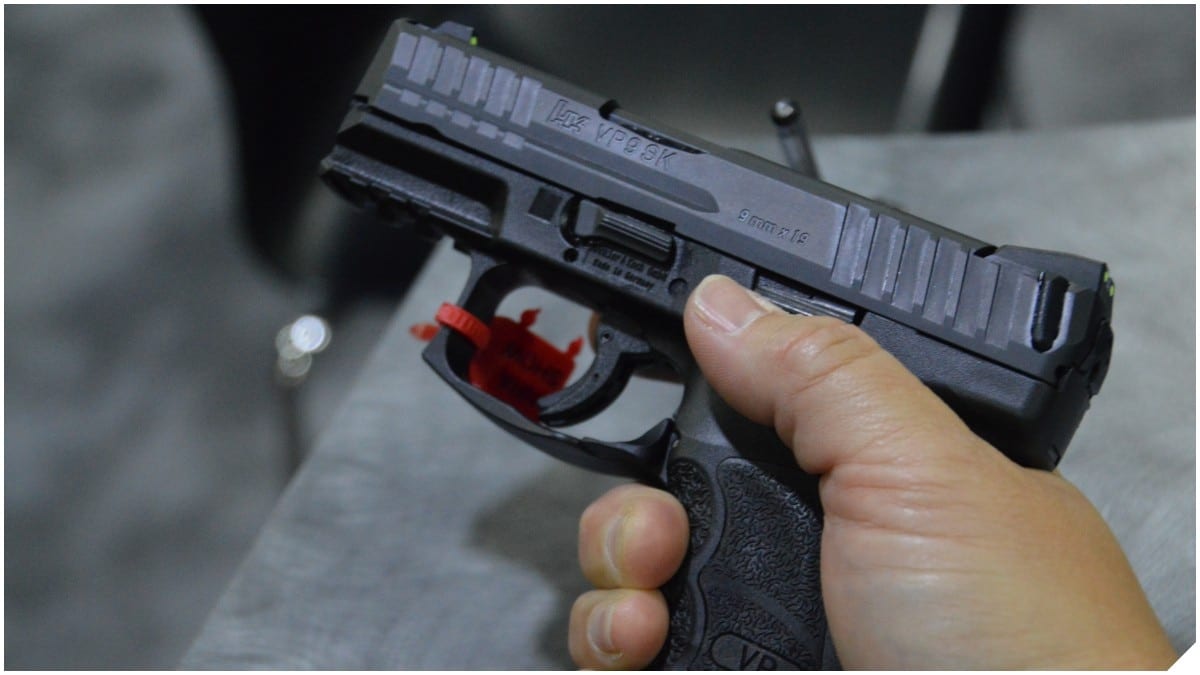 Looking for an HK VP9 in California? Good luck unless you have an off-roster gun. Once Gov. Newsom and the anti-gun groups in the state are done, you will be lucky to get a cap gun! (Photo: Chris Eger/Guns.com)

The bills, widely opposed by not only Second Amendment groups but in some cases by the ACLU as well, give the Golden State some of the most restrictive gun laws in the nation. Newsom, a Democrat who formerly served as lieutenant governor of the state and mayor of San Francisco, approved the legislative package Friday while representatives of national gun control groups such as Everytown and Giffords were in attendance.

“California continues to be a leader in fighting the threat of gun violence,” said former U.S. Rep Gabby Giffords in a statement released by Newsom’s office. “The legislative package Governor Newsom signed today will help make California safer for all who call it home, and it shows the nation what committed, active, and thoughtful leadership on gun safety looks like. Giffords is proud to have played a strong role in helping craft this package and to have partnered with Governor Newsom, the legislature’s gun violence working group and so many other courageous leaders in California to push these bills to become law.”

The bills include moves to make it easier to seize guns without a trial and place more regulations on firearm sales, ban gun shows at some state-owned facilities and outlaw direct sales of items such as “80 percent” lowers, among others:

AB 12 extends the duration of a gun violence restraining order (GVRO) from the current one year to a maximum of five years. These so-called “red flag laws” allow courts to issue an order to seize firearms and suspend the gun rights of an individual without a trial, putting the burden of proof on the subject. Second Amendment groups have described such measures as “turn in your neighbor laws” over concerns about due process protections.

AB 61 allows an employer, coworker, or an employee or teacher to file a petition requesting a GVRO. Formerly, only family members or police could do so. The ACLU of California told lawmakers this bill “creates significant potential for civil rights violations” and gives the ability to seek such gun seizure orders to “many of whom lack the relationship or skills required to make an appropriate assessment.”

AB 164 makes it so that any person in California who is subject to a protective order in another state would be barred from buying or possessing firearms in California.

AB 339 requires police to develop and adopt written policies and standards regarding the use of gun violence restraining orders, to make agencies more aware of how to use them. Sponsor Assemblymember Jacqui Irwin, D–Thousand Oaks, said he filed the bill because police only seized guns from about 200 people under GVRO laws the first two years after they were adopted.

AB 521 directs the state-funded UC Firearm Violence Research Center at the University of California, Davis to develop “multifaceted education and training programs for medical and mental health providers on the prevention of firearm-related injury and death”

AB 645 requires a Surgeon General’s style warning statement on suicide prevention to be placed on firearm packaging in the state.

AB 893 bans the sale of guns and ammo at the Del Mar Fairgrounds in San Diego county. The venue has long hosted the very popular Crossroads of the West gun shows, which have been the subject of protest by local anti-gun groups.

AB 1297 lifts the $100 limit on processing fees for police chiefs or sheriffs who issue a concealed firearm licenses in the state. The California Rifle & Pistol Association warned lawmakers that the bill “will result in high and inconsistent fees charged throughout the state.”

AB 1493 would allow someone who has had their guns seized through a GVO order to shortcut out the appeal process and just voluntarily relinquish their firearm rights.

AB 1548 allows the “California State Nonprofit Security Grant Program to improve the physical security of nonprofit organizations that are at high risk of violent attacks or hate crimes due to ideology, beliefs, or mission.”

AB 1603 allows the “California Violence Intervention and Prevention Grant Program to help reduce violence in communities that are disproportionately impacted by violence.”

AB 1669 increases gun show regulations on ammunition vendors. The NRA said that “This legislation appears nothing more than an effort to put more cost constraints on gun owners to foot the bill for the massive cost pressures the legislature has put on DOJ in recent years including ammunition background checks and long gun registration.”

SB 61 bans the sale of a semi-auto centerfire rifle to those under 21 years of age and rations such rifles to one in a 30-day period. The bill had been previously vetoed three times by Gov. Brown as pro-gun groups argued it would impact everything from Boy Scouts groups to funds for conservation, which come in part from a federal excise tax on firearms sold in the state.

SB 376 requires that anyone who sells guns more than five times a year, or sells more than 50 guns in that period, to obtain a federal firearms license and meet all state requirements for the same.

A 16th measure, a resolution passed by the state legislature that did not require Newsom’s signature, AJR 4, urges Congress to require background checks for virtually all firearm transfers.

“These new laws pile onto the hundreds of existing laws and, like the others, will be equally ignored by criminals,” said the NRA in a statement.